If it flies, its at EAA’s AirVenture 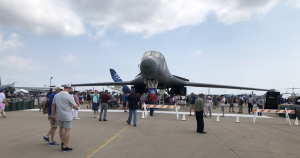 If you have a bucket list, on it should be a trip to Oshkosh, WI for the EAA’s (Experimental Aircraft Association) AirVenture. Even if you’re not a total plane geek like me, there’s plenty to see, from vintage aircraft, homebuilts, warbirds, jets, and more.

There’s always something in the air. This year event location, Wittman Field, had an average of 134 takeoffs or landings per hour. It’s a hopping place with more than 10,000 aircraft and 601,000 spectators. This year’s show ran from July 23rd through the 30th.

A sports car that flies

I’m not talking about a super fast one like a Hennessey Venom GT which scoots along at 270 MPH or a Bugatti Chiron at 261 MPH, I’m talking about a car that really flies, like as in an airplane. Meet the Switchblade plane manufactured by Sampson Sky on display at AirVenture this year. This is really cool. When the wings fold into the bottom of the car it will have a cruising altitude of 13,000 feet and a 200 MPH top speed in the air.

On the ground, positioned as the first “Sports Plane”, the two-seater top speed is in excess of 100 MPH.  Power comes from an engine of Samson’s own creation, a 190bhp liquid-cooled 1.6-L V4, which gets around 48mpg on the ground, running on 91 Octane fuel. In the air, it’s around 9g/hr, giving a range of around 450 miles.

Not nearly as fast as the Venom GT or Chiron in either element but a whole lot cheaper. While those cars are in the millions of dollars, the Switchblade sells for about $120,000. Oh did I mention that it’s a kit? Yup, it will arrive at your destination with about 50% of the work done. First flight of the Switchblade is expected this fall with kits beginning delivery about a year later. 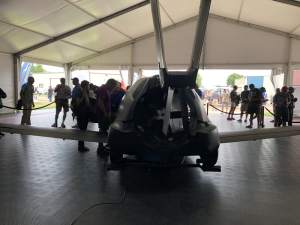 Before there was fast food, there were drive-in restaurants

When’s the last time you were at a real old-fashioned drive-in restaurant? Not just where the girls come over to your car and take your order, but one where they skate over. I experienced it for the first time one night while up in Oshkosh. It’s called Ardy & Ed’s and is just like a scene from American Graffiti.

Benefits of being a volunteer

This was my 10th year as a volunteer at the event along with daughter Meg. My duties involve giving kids discovery flights with radio controlled planes. It’s a lot of fun. We fly in a very small parcel of airspace carved out by KidVenture. Meg helps out and also volunteered at a camp called Women Soar, You Soar. It is designed to get girls, grades 8-12, introduced into opportunities in aviation and aerospace and not just into the cockpit but also logistics, marketing, maintenance and more.

The volunteer staff is made up of commercial, civilian, and military pilots with tens of thousands of hours in the cockpit along with engineers. Meg loves hearing their stories and it gives her great motivation to excel in her aviation career. Over the years she has sat in the cockpit of a P-51 Mustang and a Martin Mars, things I’ve never done. I did get to tag along on an invitation to fly in a vintage Grumman Goose seaplane from the north ramp at Wittman to the

seaplane base on nearby Lake Winnebago and back. What a ride.  Thank you Women Soar, You Soar Chairperson Debby Rihn-Harvey for making this happen. Can’t wait until next year. See you there?