Since the mid-1960s most Le Mans-style prototype racers have put the engine behind the cockpit. Certainly the winning cars have featured this layout.

So it was a surprise in 2015 when Nissan opted to swap that layout, putting its muscular twin-turbo V6 back in front of the cockpit driving the front wheels. The car looked a bit like a spinoff of the Delta Wing, just not quite so radical.

Still, it was radical to put the engine in front and Nissan did this as it was jumping into sports prototype car racing, a tough learn. 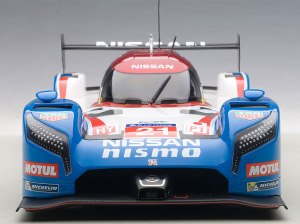 The GT-R, using Nissan’s noted high-performance car’s name, was created to race in the FIA World Endurance Championship. Nissan had last entered the competition in 1999 with its R391 model, so it was on a steep learning curve.

Nissan engines have been used in such racers for years though and the GT-R’s engine was a joint effort between Nissan and noted race engine maker Cosworth. It was a twin-turbo 3.0-liter V6 with direct injection. Plus this was a hybrid racer, as many are now, that used a kinetic energy recovery system, similar to what Formula One cars use today to create additional power. Overall the gas engine and hybrid system was rated at 750 horsepower.

To deal with the front-mounted engine’s weight, the Nissan racer also used wider front tires and wheels vs. those in back.  Another unique feature was front-mounted exhausts just in front of the windshield to help cool the turbos, which were mounted on top of the engine.

We can’t see under the hood here, as this is a sealed bodied model. But its red, white, and blue body is interesting on its own, and perfectly shaped. The racer’s long nose reminds of earlier years when front-engine racers were the norm. Plus the cockpit’s little doors flip open gullwing style to give you a peek inside.

Tires are wide slicks with Michelin labeling and there are black sport racing wheels with big black disc brakes and silver calipers behind those wheels. Especially cool here is that the endurance car has vents cut atop each fender so you can easily see the tires rotating beneath.

Another cool feature that’ll get your showcase viewers’ attention is the chrome surrounds on the hood where the four exhaust pipes protrude just in front of and either side of the cockpit. Thank goodness this is a closed cockpit or that could get hot and exhausting (sorry), during a race.

Small blue mirrors rest atop those boxy front fenders and feature real mirrored lenses. While up front are LED-style lights that appear ready to guide the Nissan through a long Le Mans night of racing.

The chin spoiler up front looks like carbon fiber as does the tall rear wing that sports a Nissan logo and attaches to the fin that runs the length of the cockpit. Sexy!

All markings look authentic with Nissan Nismo, Motul, Michelin, Tag Heuer being the prominent markings on the nose and sides. There also are World Endurance Championship logos and the 24 Hours of Le Mans stickers here too. 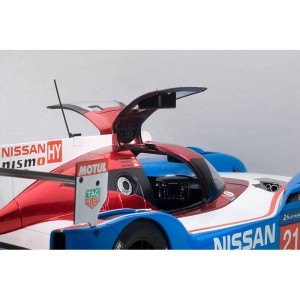 The tinted wraparound windshield and door windows look great and there’s a single wiper for the cockpit’s windscreen. The roof is a red chrome look too that is a major attention grabber.

Inside is a black race cockpit with one race seat, seatbelts, a small fan on the dash to keep the driver cool and a squared off modern race wheel with a zillion buttons on it. Likewise there’s a computer console of sorts to the left side for programming just about everything except the car’s steering. Oh, and an overhead rearview mirror, sadly something the Nissan needed to watch as faster cars passed it up. 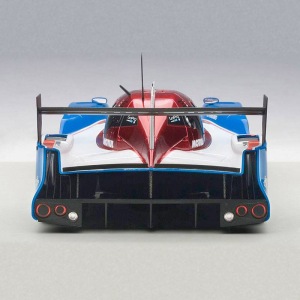 Still, this is a gorgeous reproduction of an unusual front-engined racer that was a bold experiment, that sadly didn’t pay off.