One of my favorite race cars, and that of many other youngsters in the 1970s was the PJ Colt that Al Unser drove to back-to-back Indianapolis 500 wins in 1970 and ’71.

It was colorful and with its lightning bolts on the nose and tail the car looked fast and, well, cool!

Replicarz knows that and created beautiful versions of both the 1970 and ’71 cars in 1/43 scale a couple years back. Now it turns its considerable attention to the more detailed 1/18 scale model of the original 1970 racer. This takes the detailing on the Colt to a much finer level and creates a stunning desktop display car.

Unser won 10 races in 1970, none bigger than Indy. This was the first of Unser’s record four Indy 500 wins and put him on a path to racing fame, along with brother Bobby. Al was the fastest qualifier in 1970 and led 190 of the race’s 200 laps. You can’t get much more dominant than that.

George Bignotti was the chief mechanic. He ultimately was top wrench on seven Indy 500-winning cars. Unser was consistent over his career too, leading the most laps at Indy, 644 laps. That’s more than A.J. Foyt or Rick Mears, the other four-time winners.

Any good resin model starts with a fine finish and Replicarz delivers a flawless bright blue finish with yellow and red Johnny Lightning bolts that join at the black No. 2 on the Colt’s nose. Plus there are lightning bolt side markings and the No. 2 featured there. In 1971 Unser would carry No. 1, due to being champion the prior year.

This is the start of when sponsorships became a bigger part of open-wheel racing and the Colt carries plenty of other markings. There’s a Vel’s Parnelli Jones Ford logo on the rear wing pod, Firestone in three places on the blue windscreen, Ashland oil on the side of the racer’s nose and Topper Toys on its top. There are Monroe shock logos on the wing’s side, plus USAC and IMS stickers, plus a host of others below the side pod’s wings. 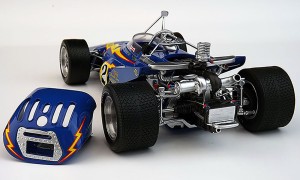 Overall Replicarz nails the racer’s shape and the panels look great with bolts that look as if they hold on the car’s panels. There are chromed suspension parts front and rear along with a chrome roll bar and tall tripod mirror on the driver’s right in front of cockpit.

In back are twisting black pipes, silver exhausts, and a turbo atop the big Ford V8. There’s a detailed black differential there too and a pop-off tail piece, again decked out with lightning bolts. Ilike the little touches too, like blue and silver front shocks.

Inside the black cockpit are white tub sides and sharp black seatbelts and shoulder harnesses. The dash is black and includes six readable dials and a black 3-spoke steering wheel.

In case your model admirers are not up on their vintage Indy racers, Replicarz includes the race day appearance of Unser’s name printed below the window along the cockpit. His name is in yellow along with chief mechanic George Bignotti.

The model features treaded Firestone tires. As with other Replicarz models, this one looks like it’s ready to dive into Turn 1 on Memorial Day! 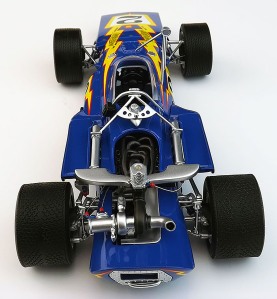