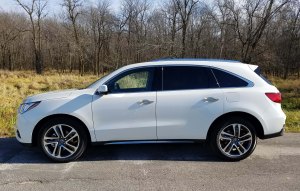 Acura’s big MDX sport-ute is loaded with luxury and high-tech items and graced with a quiet interior and powerful V6.

The top-of-the-line test model was a bright white MDX SH-AW with both the Advance and Entertainment packages. The SH-AWD stands for Super Handling All-Wheel-Drive. Not sure I’d tout the super handling ability, but the Acura does have AWD to help in winter.

Certainly the MDX handles well, but super may be pushing it a bit. There’s also a dynamic mode button on the console to allow a driver to set it for Comfort, Normal or Sport modes. Those adjust the 9-speed automatic transmission’s shift points, the suspension and steering effort.

Normal is fine while Sport firms the steering effort to an extreme measure and Comfort softens the ride to make it accommodating of Midwestern roads ravaged by winter and years of neglect. Note the AWD system is automatic, so the ute has instant traction once the roads turn sloppy.

Power is good from the 3.5-liter I-VTEC V6. This kicks out 290 horsepower and 267 lb.-ft. of torque to make the big ute seem pretty quick to highway speeds. Its strength also allows the MDX to tow up to 5,000 pounds.

Yet the MDX’s new 9-speed tranny shifts a bit abruptly, a surprise in a luxury ute where smooth and quiet rule the day. I liked the former 6-speed better, but more gears are intended to improve gas mileage, so Acura won’t be stepping backward on this front.

For the record the MDX is rated 18 mpg city and 26 mpg highway. I got but 19.6 mpg in about 60% city driving. I had done better in the 2014 model with its 6-speed tranny, but had used it more in highway driving, so not a fair comparison.

Ride remains an MDX strong point aided by its 111-inch wheelbase. Our bumpy streets didn’t cause its riders much stress.

Inside, the test vehicle had charcoal gray leather seats with lighter gray stitching, which matched the headliner. The dash is handsome with matte silver trim and sparse open-pore wood inserts in the dash and doors and the lid of the storage area on the console. This looks classy.

Quiet reigns inside with little road or wind noise thanks to thicker acoustical glass. That means conversations or cell phone chats are easily accomplished. (Hope you’re phoning while parked though.) 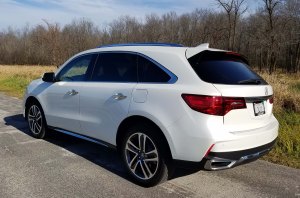 Acura delivers well contoured leather seats, with both the front and rear seats being heated in this model. Front seats also are cooled and the driver’s seat has a two-setting memory system. The steering wheel is a powered tilt/telescope model. I like that the wheel powers up when the ignition is turned off, but the driver’s seat does not power back as many do at this price point.

That’s the same as it was when I drove the MDX three years ago and I mention it again because as a shorter driver I tend to put the seat fairly far forward. That creates issues here. I found it hard to turn my feet and exit the vehicle easily because space is tight between the door opening’s edge and the seat frame. So I’d catch my left foot between the two on the way out. Additionally I frequently bumped my right knee on the steering column when exiting.

I’d prefer the seat to power back an inch or so just as the wheel powers up for easier entry and exit. This is only an issue for shorter drivers.

Another bugaboo is the bottom seat cushion. Its front edge will not power downward enough, so you sit with knees slightly raised, more in a bucket seat position than in most utes where a straighter leg position is more customary.

Dash buttons are large though and everything is easy to see and read. The wheel’s hub includes buttons for a trip computer, cruise control and phone and I love the rollers on the wheel that allow you to thumb up the preferred radio volume and other info.

For shifting there’s a push-button system on the console. This takes a few days to get comfortable with, particularly pressing a button to put the ute in Park before taking one’s foot off the brake. 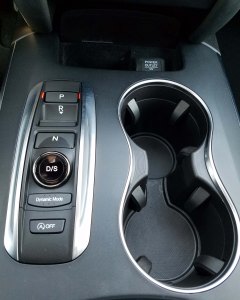 Acura goes with two dash screens too, the top one devoted to navigation. While the bottom touchscreen adjusts the radio and heated and cooled seats and other functions. It wasn’t tough to use, but I miss having easy radio station channel buttons. There’s also a big mouse dial mid-dash to make information and source choices on the lower screen. Navigation and radio also are voice activated.

Sadly the on-screen heated seats and steering wheel functions have to be reset every time you start the car. Unlike the old-fashioned console buttons that remembered your setting, these zero out each time the ignition is turned off. Grumble, grumble!

The A-pillars also are large in the MDX and can create some sightline concerns. Yet the MDX SH-AWD is loaded with techie stuff because of its Technology package. That includes a backup camera, blind-spot warning system, remote start and rear-cross-traffic alert. A sunroof and the navigation system also are standard here as are inside gas filler and hatch release buttons.

The Advance package adds two captain’s chairs in the second row and a fold down third row that will seat two adults. These flip down easily to load and unload and also fold into the cargo floor. The Advance package also adds the cooling feature to the front seats, a nicer leather seating surface, a surround-view camera with overhead view and front and rear parking sensors.

Acura’s Entertainment package in the tested MDX includes a big screen that folds down from the ceiling for the second and third row folks to watch, while the driver can control the DVD viewing from the front, if need be. Naturally there are a couple wireless headphones. If you don’t get the Advance package, the Entertainment group provides a second row bench seat so the MDX will seat seven.

Pricing is luxury-level high, with a base price for the SH-AWD model, including delivery, at $59,340. But there were no additional options and most that are available at this level are dealer add-ons like bike racks, etc.

The base MDX starts at a much more civil $44,890 and comes with front-drive, but the same engine and transmission as the test model. You can add just the Tech, Advance or Entertainment packages. Prices range from about $51 grand up to the $59 grand and change for the test model.

So MDX offers flexibility on pricing and equipment packages and delivers a quiet comfortable ride, plus plenty of power.

Made in: Lincoln, Ala.