As a kid my first promo model was a pink ’63 VW Bug. I had my eye on this at the local hobby shop for the longest time lusting over it although I doubt at age five I knew what lust was. Dad said is was mine if I would give up dragging around my blanket, yup just like Linus from Peanuts. Tough but I did it for my first promo model and the rest is history. I bet I’m not alone either touching up promo models or redoing them the exact paint code. Dad brought home lots of them when he went to work for American Motors in 1963. I didn’t have to give anything up when those started rolling in the door and I had boxes of them. Most promo model cars will come in the colors that their big brothers were painted in like this rare red 1970 AMX that I have in my collection. Sure AMC made a red AMX in 1970 but this color is more of an approximate, not exact color match. I must have painted and detailed lots of them but none to the detail I have seen on the auction sites.

This ’61 Pontiac Ventura was built by Paul Hettick (robbbbbb57 on eBay) who has been into this end of the hobby since 1966. He is a builder’s builder having helped several resin casters with masters for new kits. He told me that he knocks out 2-3 cars a week, with this impressive detail I might add, and uses proceeds from the build to support a classic car collection which includes a ’72 Buick Rivera, a couple of ’57 Plymouths, and more. Paul is slammed and recently just completed a very detailed order he had received back in 2009.

This Pontiac is built from a Moebius kit, a company known better in model making circles for its sci-fi kits. They also have some really cool car kits too like their Hudson Hornet. The Ventura is finished in the factory color, Rainier Turquoise metallic code P Base coat and then a clear coat. Paul also detailed the engine and chassis. It has a beautiful three tone interior with flocked carpeting, simulated weatherstrip around all the windows, vintage California license plates, Modelhaus tires, and the icing on the cake was color sanding it to give the Pontiac it’s mirror-like shine. Bidders agreed and the Pontiac hammered at $695. 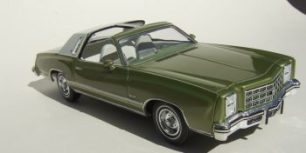 Now take a look at some of Paul’s other handiwork like this 1976 Monte Carlo. Looking at the images you could swear this is a real one. This one was built from a Revell ’77 Monte Carlo kit. Paul added the t-tops along with all the surrounding moldings. To make it a ’76 added were a ’76 grill emblem, ’76 tail lights, and reworked rear wheel openings as Paul says Revell got the shape wrong. Finishing off the exterior the Monte is painted in an original factory color, Lime Green metallic, 40 Base and then clear coated. Like the Ventura, it was color sanded to make it shiny. For you Chevy fans yes that is the factory correct color combination. Lime Green flocked carpeting was added to the interior. Did not sell on eBay because it did not meet the reserve however he did end up selling it for $650 to one of his customers. 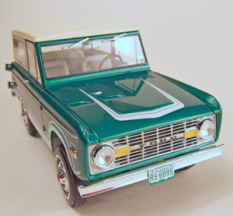 Most recently on eBay was this ’72 Ford Bronco built from a new Revell kit. It is finished in a factory color, Chelsea Green metallic base coat and then topped with clear coat. He then color sanded it, highly polished it, resulting in this mirror shine. Check out the interior detail with hounds tooth inserts in the seats and door panels, simulated rubber weatherstrip around all window areas and finished off with vintage Colorado license plates and Modelhaus tires. If you think the winning bid of $405 is a lot of money, it’s nothing compared to a real deal like this which goes for around $40,000.

Sean Svendsen owns Sven’s World of Wheels and takes scale model building to the next level. “I am an diehard gearhead and lover all things automotive both big and small. I have been collecting and building small cars since I was old enough to hold them. My mother has told me that when I was a baby I had a toy tractor and would just sit in my crib and watch the wheels spin, so I guess I was hooked early on.” he told me. I can see that. He says he spends about 5-10 hours a week working on model cars. It usually takes me about 20-40 hours worth time to complete one. I always have 3-4 projects in various stages going on at one time and can usually finish 7-8 a year. Mostly, I just build for myself, but I do have a few customers that I also do special order work for. These one-off custom replicas start in the $1000 price range and can take 6 months to a year to complete. Worth every dime of that!

Sven says his automotive tastes are very bi-polar building primarily build hot rods and custom cars, but he’s been known to build replicas of other kinds of cars too like racing cars, trucks, and light commercial vehicles. He loves building hot rods because he says it allows his creative side to run free. “I can be expressive and experiment with colors, design, and trends. I always try to come up with something original. I go for shock value.” he says.  For these models it’s less about making them look realistic and more about expressing ideas he has about automotive style.

For building replicas of real cars he takes a completely different approach. Sven says replicas require more extensive research to really nail the right look. These cars are often very familiar to people and car guys know when they see a model whats right and what’s not. He spends hours and hours scouring the internet collecting reference photos of these subjects because he wants to capture the details that make these cars unique and memorable. When building hot rods he really enjoys it when somebody says “that’s a cool idea, I’ve never seen anything like that before.” 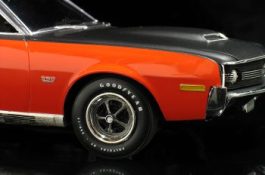 When building replicas he wants people to say “that’s exactly how I remember it.” Like this 1970 American Motors AMX . Check out the detail on the AMX which Sven painted what AMC called Big Bad Orange. Amazing what Sven did with the red, white, and blue circle around the AMX letters on the sail panels, the detail of the 390 engine emblem located on the front quarter, and the raised white letters on the Goodyear Polyglass tires. I can tell you from my first-hand experience Sven that you nailed it!

found a complete built-up Johan 1970 AMX model back in the early ’80’s at a swap meet and snagged it quickly because I knew how rare it was. It then sat in my stash of to-do projects for close to two decades before I finally got around to recently rebuilding it into the model pictured. The first order of business was to the strip the original paint. An overnight bath in Super Clean Degreaser (better known as “the purple pond”) revealed a very nice body with no sand or glue marks. I got lucky on this one. Lots of times a thick brush paint job can hide a really crappy body underneath, but this one was spared the harsh model building techniques of most kids back in the ’70’s.

CAST RESIN, 1/25th scale, made by modelhaus, built kit has been professionally finished into the factory moss metallic. the paint code is FFF. the roof is finished into the factory mint, paint code EEE. the upper section is also mint. the chassis is finished into the moss metallic. it has a two-tone interior. the body is dated 1958. the chrome is new. nothing broken or missing. this was never made in a kit. the chassis has 3 screws holding it together. this is an extremely rare piece and it would be quite difficult to find another one in this color combination. this has chrome foil on this one for better enhancement. the finish is outstanding. i dont believe these are available thru modelhaus any longer. take a look at pics. email questions.