New Acura RLX sport sedan does it all

I quickly feel in love with driving the new Acura RLX Hybrid, a sport sedan that does everything right from a performance standpoint.

One could argue that its looks are pedestrian, and they are mid-pack at best. But driving the RLX is like flying under the radar of our beloved highway patrol simply because it does NOT stand out visually. It simply kicks booty when it comes to manhandling the roads.

First, the Crystal Black RLX Sport Hybrid I tested was the top-end model with the Advance package and clicked the cost turnstiles at $66,870 including delivery. There were no options left to add.

The Advance package hybrid comes with the standard RLX engine, a strong 310-horsepower 3.5-liter V6 with variable valve timing. To that it adds a hybrid system consisting of three electric motors, two working directly to power the rear wheels. That electric power extends gas mileage and boosts power by 67 horsepower for a total of 377 ponies.

In standard mode the car has generous power from a stop, but punch the Sport button on the console and the car is noticeably faster off the line, delivering a punch you might not expect from a car of such nonchalant looks. Sort of like discovering your class valedictorian also is a professional stunt double.

Helping put the power to the pavement is Acura’s buttery smooth 7-speed dual-clutch automatic transmission that hooks up with the car’s Super Handling All-Wheel Drive system. This puts the proper power to each wheel no matter the road surface, or viscosity of slop on it.

So now you have power, traction and excellent handling from a luxury sport sedan with moderately heavy steering feedback. I drove the car between Milwaukee and Indianapolis and it was a delight on the highway, and in town, a perfect mix of sport and luxury.

Braking is tremendous too and ride from the double wishbone front suspension and rear multi-link leans toward the comfortable luxury end, yet with just enough firmness to retain the sport sedan feel. This is one of the best riding sedans I’ve driven the past year or so.

My only mechanical issue is one that an owner might solve over time. It regards the push-button transmission.

I’m all for push-button simplicity, but the Park button at the head of the console provided no feel or feedback once engaged. I had to watch the dash to be sure a P was displayed to know I was truly in Park.

A small lever, when pulled back, in the console is fine for putting the car in Reverse, while a D button closer to the driver puts the sedan in Drive. There’s no good feel to the the P or D to assure a driver is in the proper gear, just the readout on the driver’s main gauge pod. The P and D need a more distinct tactile feel.

Yet no adjustment is needed to feel at home and comfortable in the RLX’s quiet, well-appointed interior.

The power seats are supportive and easy to adjust. They also include three levels of heat and cooling up front and the rear seats are heated, as is the steering wheel.

Acura creates an attractive dash and trim, the test car’s being dark gray leather with pewter look trim on the wheel and dash with wood-look dash face and console trim. A friend and I both enjoyed the seats’ comfort on the Indy roundtrip, and despite both of us having chromic back issues, neither felt back pain during the drive, a testament to the seats’ comfort. 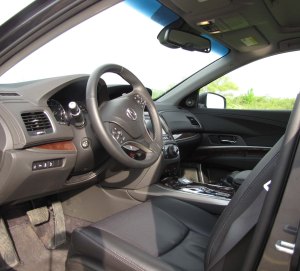 I mentioned the RLX is technology rich and that starts with a power tilt/telescope steering wheel, two-setting memory driver’s seat, head-up display and blind-spot warning system. There’s more too, like a road departure mitigation system along with collision mitigation (the new 50-cent legalistic term that means it helps prevent collisions).

There’s dynamic cruise control and Acura Watch that includes cross-traffic alerts for when you’re backing up. Windshield wipers are rain-sensing.

From an entertainment perspective the RLX adds a fancy Krell sound system with 14 speakers. It sounds great.

There’s also a surround-view camera that shows you an overhead view of your car when you put it in Reverse. This is helpful in tight parking spots.

Other premium features include a power rear sunshade that rear seat passengers control, plus manual side-window sunshades. The car’s side mirrors also fold flat against the body once the car is turned off and locked.

As with many luxury cars the steering wheel hub is a virtual airline captain’s dream of buttons and switches to control phones, cruise control, radio/stereo and the trip computer. The thumb rollers on the wheel are extremely easy to use. There are two screens mid-dash too, one for radio and other functions, the top one for navigation. I was surprised the nav system did not include live traffic updates though.

Acura delivers push-button start and a push-button glove box release, while overhead is a big sunroof and sun visors that slide.

For the record, the RLX will easily carry five adults with extremely generous rear legroom, plus it’s two inches wider than the former RL model, which aids shoulder room. However, the hybrid model has limited trunk space, just 11.6 cubic feet compared with about 15 cubic feet in the standard model. The hybrid system sucks up that extra trunk space. Two to three moderate-sized suitcases will fit.

Of course there’s the performance benefit of the hybrid, plus the improved fuel economy. The test car is rated 28 mpg city and 32 mpg highway by the EPA. I got between 29.1-33.1 mpg in city and highway driving, the latter being all highway.

Acura also offers an RLX with standard power, the same 3.5-liter V6 as in the hybrid. That model starts at about $52 grand, but does not include all the tech and comfort items on the hybrid. So check package pricing to see what you could afford to live without.

As it is, the hybrid RLX is a fun drive and comfortable car that blends in anywhere. Performance is what makes it stand out. 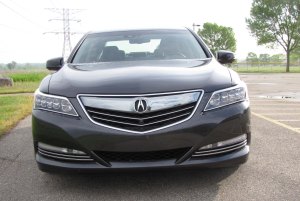 Misses: Blend-in looks, price, limited trunk space due to hybrid system, poor tactile feel to some of the push-button shift controls on the center console.

Made in: Sayama, Japan