Originally I was not a big Dodge Charger or American Motors Marlin fan. Both were too radical in their fastback designs for me. I preferred the Plymouth Baracuda and Ford’s Mustang 2+2.

But by 1968 the second generation Charger looked racier to me and in 1969 Dodge launched the Charger 500 to help it better compete in NASCAR with the likes of Ford’s Torino Talladega and Mercury Cyclone models. The 500 was a limited edition, of (you guessed it) 500, which allowed it to meet NASCAR production standards, back in the day when the racers really were stock cars, or based on them.

So Auto World’s new 1/24 scale version is of the rarest Charger of the day, but in this scale is value-priced with just an opening hood to show of its V8. 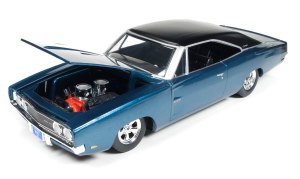 To make the cars faster on the track Dodge cut drag by flush mounting a Coronet grille and adding exposed headlights. In addition, its engineers made the giant rear window a flush mount window by tilting it more and moving it to the trailing edge of the C-pillar. Later these changes became standard in the Charger Daytona model.

This model is painted in the 500 prototype’s scheme of B5 Blue with white stripes … white interior. This adds a flat black roof to resemble vinyl roofs of the day.

The 500 featured Chrysler’s Torqueflight 3-speed automatic tranny, but 27 had a 4-speed and 40 more were equipped with an automatic. Being of such limited quantity, and some being raced and disappearing into the racing chop shops, Charger 500 models fetch more on today’s auction blocks, one selling for $181,500 in 2014.

Sadly, the most famous 1969 Charger is the orange General Lee from TV’s old “The Dukes of Hazzard” series that ended in 1985.

Auto World’s model has the low profile of the Charger 500 and it reflects a high quality finish for an entry-level die-cast car in plastic modelers’ favored 1/24 scale. Body shape and creases are well executed, especially in the hood that oozes Charger power. 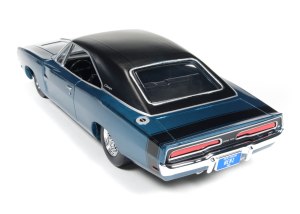 Up front are chrome headlights, remember these didn’t roll away on the 500 model, plus front and rear bumpers are nicely chromed. Rear lights are painted-on red.

The roof is flat black and “Charger” is printed on the roof’s C-pillar, while the grille says “Charger 500.” Door handles and key holes are painted silver as is the window trim. HEMI decals grace each door, as on the original. Then in back is the black tail ring decal with “500” on each of the car’s flanks.

This one’s hood opens to reveal the orange HEMI block with black headers along with fan, radiator and belts. Two chrome carbs sit atop the engine. Doors and trunk don’t open, but at this price that’s not expected.

The car rides on custom chrome wheels and tires are treaded, but not branded??? Also the car’s underside is mildly detailed and includes dual tailpipes. Front and rear includes blue South Carolina personalized plates with “HEMI” on them.