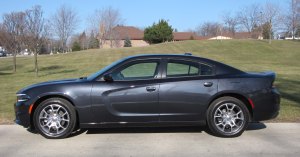 So hurrah for the Dodge Charger and its generous sized interior, a full-figured person’s dream machine. There’s head and legroom to spare, front and rear, plus Charger happens to be available in so many trim levels a person can pick and choose just the right power and goodies quotient to meet their needs, and pocketbook.

My test car was the SXT AWD model, which means it can hold its own on slippery streets. The SXT also is second on the trim level list to the base SE, so it’s not a complete budget buster. Oh, and Charger looks muscular and distinctive, not something many large sedans can claim. Dig the full-body-width taillight bar!

For the record a base SE lists at $28,990 including delivery. It comes with the same 3.6-liter VVT V6 as in the SXT, an engine with a generous 292 horsepower and 260 ft.-lb. torque rating. Moving up to an AWD version pushes that to $31,240, just about the average transaction price for a new vehicle these days.

The tested dark metallic gray (Maximum Steel Metallic) with a hint of blue in it, was listed at $31,995 in AWD trim. If power and speeding tickets are to your liking, the super-duper top-end Charger is the SRT Hellcat with a 6.2-liter V8 that cranks a mind-bending 707 horsepower. It lists at $68,640, but compare that with the supercars that start north of $1 million and have lesser horsepower, and it’s a bargain. There are three other trim levels between SXT and Hellcat and yes, HEMI V8s are available.

But this SXT AWD is fine for large (in number, or dimension) families who want comfort and enough power and style to make the neighbors question why they’re driving a boxy SUV.

The strong V6 with variable valve timing is quick to respond to accelerator input and jumps up to highway speeds with little effort. There’s some engine growl too, if you like that, but not the same as a V8. Chrysler’s 8-speed automatic transmission shifts smoothly and is well mated to the V6. The test car added the $1,295 Rallye Group that ups the horsepower to 300, so this one has just a bit more juice than the standard Charger.

Ride is good, well controlled, and the long 120.2-inch wheelbase spreads the bumps out even on Wisconsin’s moonscape roads. The Charger puts more emphasis on muscle and grunt than handling, but that’s not to say this handles poorly. In fact, the Charger handles well, with only moderate lean in corners and it’s especially pleasant on the highway. But at 4,188 lbs. the car feels heavy and steering effort is heavier than on many sedans.

Again, this model comes with AWD, which would be much preferred in our climate vs. rear-drive for a heavy car with hefty power. Traction control, stability control and 4-wheel disc brakes back all that up. The Rallye Group also subs out the standard R18 tires with beefier R19s.

I like how the Charger’s interior is laid out, although the dash itself is a monument to soft black plastic. This model included white leather inserts in the doors and white leather seats trimmed in black to spiff up the interior, and part of the $2,495 AWD Plus Group.

The steering wheel was a thick black leather, a comfortable fit for large hands. Seats themselves are modestly contoured, again providing more comfort for folks with wider hips. Both front seats have power and there are two memory settings for the driver’s seat. I had several folks ride in this one and all claimed the back seat was cavernous and comfy.

The AWD Plus package also adds two-level heated and cooled seats, along with a heated steering wheel. But the heated wheel did not stay on for more than a minute or two at a time, so I had to keep futzing with it on cold mornings. Never had that happen on a Dodge before. Rear seats also were heated.

Dash layout is simple and useful with a large nav/radio screen and big buttons and knobs that make for easy adjustment of the climate controls and radio.

The equipment packages added most of the electronic goodies we’ve become accustomed to the past five years, stuff such as a ParkSense rear park assist, paddle shifters behind the steering wheel, and a premium sound system, a Beats speaker and subwoofer here with 552 amps of power pumping it up.

For just $295 the car adds a blind-spot monitor system (well worth it), and for $695 it adds a back-up camera and GPS system with HD radio and Uconnect infotainment system and more. Oddly, none of the pricy packages included a sunroof on the test car.

Standard is a giant trunk though. At 16.5 cubic feet it’ll hold a lot of luggage for that family cross-country trip, now that gas prices are down. Also standard are sun visors that slide and feature extenders. Bravo!

You’ll be glad gas prices have dipped once you sidle up to the gas pumps as the V6-equipped Charger is rated at 18 mpg city and 27 mpg highway, much like a mid-size SUV or crossover with AWD. I got just 20.7 mpg in a week’s drive about evenly split between city and highway time.

Final tally for the test car was $37,770 with all the options and the $995 delivery fee. That’s a bit above the average car price these days, but considering all the equipment, space and muscle it’s in the ballpark for full-size cars. Some are heavier on luxury, but the Charger delivers space, comfort, power and style that many others lack.

wheel would not stay on for long.

Made in: Brampton, Ont.