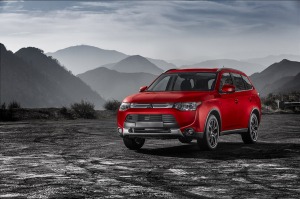 Mitsubishi’s new Outlander is a handsome SUV, but remains a middler.

Its performance falls in the middle of the crowded small to mid-sized sport-utility market. Little stands out.

The tested “rally red” ute was the 3.0 GT S-AWC model, meaning it’s loaded with Mitsubishi’s more desirable V6 engine and all-wheel-drive. This model’s base price of $28,195 isn’t bad, but not the lowest cost on the market either.

Trust me, you’ll want the 3.0-liter V6 version because it generates a decent 224 horsepower. Although torque is a modest 215 so you’ll have to jam the accelerator to get it to jump up to passing speed or to hustle onto the freeway. The base model touts a mild 166-horse 2.4-liter I4, not a great choice to haul around a 183.3-inch long sport-ute that can weigh between 3,200 and the test unit’s 3,571 lbs.

While power is decent in the test ute, its forte is handling. Steering is relatively quick with very minor play in the wheel. Handling is good with only modest lean in high-speed turns. It’s a pleasant highway cruiser and easy to control.

Ride though is relatively firm, with the Outlander’s tail seeming to jump and bump readily over sharp road creases. While not uncomfortable, the jolts are more noticeable than in many utes of this stature. For instance the Nissan Rogue and Subaru Forester’s rides feel more compliant. 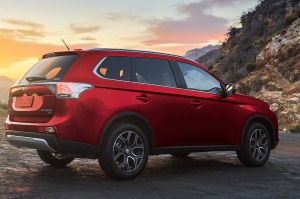 Outlander’s 6-speed automatic transmission also is a tad noisy and shifts aren’t as smooth as in much of the competition. Mitsubishi does give the ute extremely tall paddle shifters, if you prefer manual shifting without having to take your hands off the wheel. There is an AWD system here too, with four settings, including Snow. This gives Outlander solid footing, a point well made several times in light snow we had during my test week.

Inside, the Outlander is well laid out with a simple, highly functional dash. The interior is noisy though, more road and wind noise making it less comforting than most utes on the market.

Yet because it’s a little longer than some small to mid-size utes, it offers a third row seat, which neatly folds down into the floor to create a generous cargo area. That feature gives Outlander seating for seven, although legroom in the rear seat is miniscule. The advantage is for folks with a couple babies to haul around in car seats, or very small children. Then the Outlander arrangement allows you the option of putting them in row three while adults ride in the second row.

Seating is comfortable with moderate contouring. The test truck’s seat were black leather (part of a package) and the front seats had two-level heating, which was welcome on several sub-freezing mornings. Three of us also drove to Green Bay for a Packer game and everyone felt the seats offered good support for a highway drive.

I like the dash layout, with easy-to-see gauges and a nice array of climate control buttons under the moderate-sized touch screen for radio and navigation. There’s a gloss black trim behind the center stack’s screen and controls, plus fake wood trim on the dash and doors.

Outlander’s tilt-telescope steering wheel also has radio, adaptive cruise control and phone buttons on its hub. That touch screen for navigation and radio features small radio volume and tuning knobs on either side. However, the touch screen’s channel selection buttons are so small that you need to be careful to hit the right one while driving. Making the proper selection is especially tough on bumpy roads.

The test ute added a massive $6,100 GT Touring Package that included a fancy 710-watt Rockford Fosgate stereo with nine speakers, a nicety to be sure. That same package also added lane departure warning, which I constantly turned off, and a forward collision mitigation system, plus the aforementioned adaptive cruise control. A sunroof, power driver’s seat and power tailgate (slow to open), also were part of the GT package.

I had a couple other concerns too, including my usual bugaboo with sun visors that don’t slide. Yet another irritant, random electronic beeps as I drove on the highway, was more disconcerting. This was not the lane departure warning system, which was turned off, just an occasional beep as I was cruising with cruise control engaged. It often occurred with no other vehicles near the ute, sometimes when changing lanes, sometimes not.

Outlander’s gas mileage is so-so too.

I got 22.3 mpg in about 70% highway driving. In a mostly city stint I managed 21 mpg, so was a bit surprised when I put on more than 200 highway miles that I didn’t come closer to the EPA rating of 28 mpg on the highway. There were three adults aboard and a bit of gear, plus temps in the mid- to upper 20s. 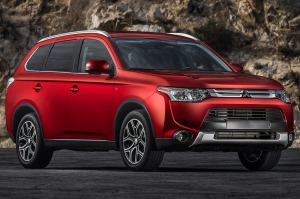 As mentioned earlier the starting price for the test ute was reasonable, but with the loaded option package and $850 delivery fee ended up at $35,145. That’s higher than I feel this one warrants.

Lower line models, starting with the ES, begin at $24,045 and two-wheel drive. The ES includes the 4-cylinder engine too, while a mid-level SE with the same 4-cylinder starts at $27,045.

Test drive one for yourself, but also check out the Rogue, Subaru Forester or Outback, and Hyundai’s Santa Fe as reasonable comparison vehicles.

Made in: Okazaki, Japan