Land Rover’s LR4 designed to hit the trail … off trail

Outside of the panache that driving a Land Rover delivers, due to their relative rarity among the sea of sport-utility trucks that cover our roads, the main reason to buy one is to go off-roading.

You say you don’t plan to go off-road with your $50+ grand truck? Well, you may want to reconsider if you like the looks and price of a Land Rover, formerly a British firm that now is owned, along with Jaguar, by Tata Motors of India.

The tested dark gray (Corliss grey, Rover calls it) LR4 is the mid-level Rover ute that starts at $49,995 in its base form. But this was the mid-level HSE model, so lists for $54,220 and comes loaded with goodies galore, plus its highly developed 4-wheel-drive system that lets you crawl over boulders if you care to dash about the outback.

Standard on all LR4s is a system that allows you to dial in four personalized 4-wheeling options, the standard one working best on pavement, naturally. You also can go for snow, sand, mud or rocks (and they mean serious ones, not gravel). This is easily accomplished by pressing one of the 30 buttons on the center stack and console. There also are five knobs there too for climate and radio controls, so a bit of overkill.

It takes but a second to engage any of these and I was thankful to have the snow setting for many of my test days in the LR4. Traction was excellent, which was well tested by the powerful (prefers premium gas) 3.0-liter supercharged V6 that pumps out 340 horsepower. That Jaguar engine is new to the LR4, replacing an even thirstier 5.0-liter V8. It responds quickly and makes this a tall, but nimble handling rocket on the freeway.

Rover says to expect 0-60 mph in about 7.7 seconds and top speed of 121 mph, should you have access to a racetrack.
Still, it’s off-roading you’ll be equipped for. For instance, the LR4 has 9.5 inches of ground clearance at its max, which you also can control with several buttons on the console. The Rover will “wade” in 27.5 inches of water, so perfect for when the spring thaw hits Wisconsin. 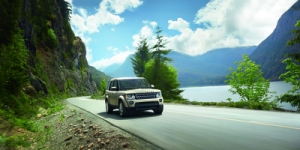 Normal ride height is 7.28 inches, which is still tall for a luxury ute. While there is a bit of a top-heavy feel to the LR4, it’s not a major concern. The test truck felt well planted on the highway and took curved exit ramps easily at close to highway speeds, with just a hint of body lean from the hefty 5,623-lb. truck.

Ride is pretty good too, with some float over abrupt rises and frost heaves, yet the potholes didn’t ruffle my rump much. Braking is fine and of course there’s stability and traction control and Hill Descent Control that keeps the ute from going down an off-road incline too fast. The ZF automatic 8-speed transmission behaved well too, delivering a high-quality, smooth feel. This also features Commandshift that allows you to shift gears manually via paddle shifters behind the power tilt/telescope steering wheel.

I mentioned the LR4’s thirst level earlier, because the new V6 is aimed at upping its gas mileage from 12 mpg city and 17 highway to an EPA estimated 14 mpg city and 19 highway. I got 13.5 mpg in about 50% freeway driving, and yes, it was 0-20 degrees during the test week. This model also has an engine stop-start feature that turns the engine off sometimes at stoplights to save gas. However, in our cold weather that only happened to me a handful of times, which may help explain my poor mileage.

The interior matches the boxy exterior styling with a square, macho look, but it’s fairly quiet and features comfortable leather seats, black in the test ute, and a well-padded leather dash with four large round air vents and a navigation/radio screen mid-dash. I was surprised the screen wasn’t a bit larger.

Gauges are simple with a tach and speedometer in front of the driver, plus digital info, including odometer and gas gauge between them. There are a lot of buttons on the steering wheel hub, like the dash, but while I found the trip computer, I could not find a screen that indicated my gas mileage. Maybe that’s not important to a Rover owner, but distance to empty could matter.
The LR4 comes with a powerful, 380-watt Meridian sound system with 8 speakers. It sounded fine, but you can upgrade to an 825-watt Meridian system with 16 speakers for $900, an audiophile’s dream.

Overhead are three sunroofs with the front two having mesh covers to keep the sun off passengers on hot days, and the front one powers open too. There are solid sun visors that do not slide, but I like the ute’s dual glove box and big cooled storage box between the front seats.

LR4’s power seats include three heat levels and both the front and rear seats are heated, as was the test ute’s steering wheel. The front seats are fairly flat with more contoured back and side cushions. Both the front and second row are comfortable and have oodles of head room. There’s also a third row seat in the HSE model. It folds flat into the floor and the second row seats fold flat, but with a bit of a rise between them and the cargo area’s rear portion.

While the heated front seats, power folding side mirrors, a parking aid sensor system, side third-row airbag cushions, navigation system and a 10-disc CD player are standard, along with the third row seats in the HSE, this one added more. A climate comfort package added an extremely helpful heated windshield and washer jets, plus the heated steering wheel and heated second row seats for $1,500. 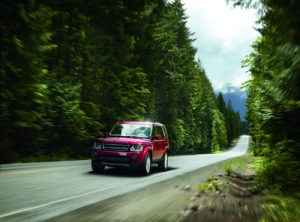 A vision assist package added a blind-spot warning system, automatic high beams, surround camera system, tow hitch assist, rear camera and reverse traffic detection for $1,600. Add in the delivery fee and the test truck hit $58,595. Certainly many domestic and foreign SUVs can hit that these days, and few, except some Jeeps, could do serious off-roading.

That’s your call on whether you need that or not. However, if you prefer a hatch over your cargo area, Land Rover disappoints with its usual split hatch that doesn’t open as one piece. The window area flips up, but the trunk door flips down into a tailgate. That may be great at a Badger or Packer game, but makes it hard to unload the cargo area as you try to reach over the tailgate.
For the diehard Land Rover fans, this one features the Land Rover name on its nose, where formerly this model was labeled Discovery.

Rover also freshened the grille and lights on this model for 2014, but it still carries a classic Rover profile.
If you’re an off-roader with a fat wallet, this one should be on your wish list.

Misses: Still poor fuel economy, many (30) buttons on the center stack, plus five dials, split hatch that doesn’t open as one piece making it hard to reach inside trunk with tailgate down.