Bugatti has always been a brand for the upper echelon buyers, folks who want the best, the most beautiful and who value quality and uniqueness as much as performance.

In 1938 Bugatti created one of its most rare cars, the Bugatti 57 SC Corsica Roadster. The 57 SC chassis and engine was all Bugatti, but its flowing body was a combined effort designed by Jean Bugatti along with Eric Giles. Giles was designing the car for his brother, British Col. G.M. Giles, later chairman of the Bugatti Owners Club. This was back in the day when the wealthy could basically design their own coachwork to be installed exclusively on a manufacturer’s chassis.

Coachbuilder Corsica, of North London, constructed the car’s sensuous body with its large sweeping pontoon fenders and long lean arrow-like hood. Alligator, then a popular luxury hide, was used for the interior.
Now owned by Californian John Mozart, the car won Best of Show at the 1998 Pebble Beach Concours. There’s no denying this is a beautiful car, well restored.

Performance: Where to start?

CMC’s model is stunning. The body’s proportions seem perfect and the silky dark blue paint job that clings to it is likewise gorgeous. Adding to its panache is matte silver waist line trim that flows from the large mesh screen grille back under the windshield to mid-door.

The center-hinged fold-up bonnet, or hood, is perfectly executed too, with small functional metal clips that hold it in place. Unlatch them and the hood folds up just beyond halfway over the massive inline 3.3-liter, 8-cylinder engine. In the original, the straight 8 created more than 200 horsepower, being based on Bugatti’s race proven engine in its Type 51 racer. 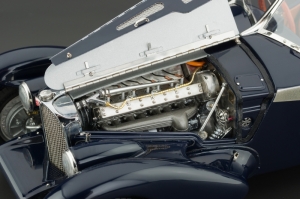 CMC delivers delicate photo-etched mesh screens nestled in the hood’s lower panel, along with a small handle on either side to raise the louvered bonnet.

Detailing under the hood is impressive and looks almost museum quality, with the appropriate wiring to the plugs and a hose and fan belt that look realistic. You can see the header, steering gear housing, carb and much more, all in pristine diecast metal. Even the underside of the hood shows cast hinge flanges.

Other standout features include the V-shaped windscreen with chrome surrounding three of its sides. This is a taller shield than was on earlier Bugattis to further buffer the car’s two riders from wind. I also like the delicate metal windshield wipers here.

Behind the doors, which open front to back (commonly known as suicide doors) on tiny metal hinges, are reflective metal protector plates on the rear pontoon fenders. Up front are realistic headlamps and small reflectors on the front of the pontoons. 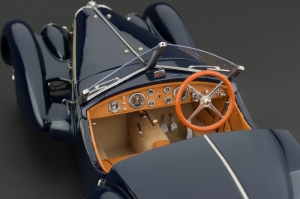 Suspensions and braking also are well detailed, as are the delicate looking wire wheels with removable center spinners. You can pop these off to remove one of the treaded tires to see the car’s giant drum brakes, too.

The roadster’s interior is impressive, starting with its highly detailed dash, a perfect match with the original when you compare photos with the CMC model. The gauges feature relatively readable faces and chrome surrounds for added realism. CMC also creates chrome buttons and gauge surrounds, and the shifter has a small wooden-look ball for a handle.

The Bugatti features a metal 4-spoke steering wheel hub with wood-look wheel, and the seats are the proper tan shade and feel like leather, but they do not feature a “crocodile leather” texture to match the show car’s interior. Still, it’s attractive and in a display case reflects the original car’s appearance.

In back is the shapely trunk and pointed protrusions of the pontoon fenders. There’s a metal flap over the trunk’s keyhole and two small twin rear lights, plus a license with GU7 on the plate. That’s the original plate number that the car wore when new in England.

CMC delivers more spectacular detail in the trunk, which includes a repair kit and spare tire, including ballpeen hammer, a rod to hold the trunk open, and various tools and boxes.

While you may never see one of these in person, the Bugatti is a work of art and no styling or functional detail has been left out here. This exudes automotive beauty.

Purchase this and other CMC models at Racing Heroes.