The question now is what that will look like. The 2015 Dodge Challenger and the 2015 Dodge Charger, both of which will be revealed Thursday, April 17 at the New York Auto Show, just ahead of the Dodge brand’s 100th anniversary this summer. Read more in their release here including how to watch the reveal live. No pictures though except oh, will you look at this one! They will have a ways to go to beat Subaru’s reveal at the Chicago Auto Show.Looks pretty cool. I’ve also seen a couple of images with the Charger in a two-door version. Now you’re talking. Next stop NASCAR. Not. 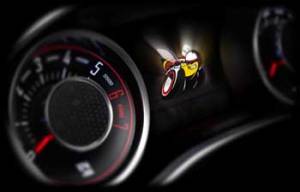 If you thought they were funnin’ us with the Charger teaser image, check out the Challenger image. Instrument cluster looks cool. They are telling me you will notice the difference from the 2014. What about the SRT Barracuda? At one point it was going to replace the Challenger. Car and Driver has a concept that looks cool but like the new Jeep Cherokee, the hardcore hate it. Read down into the comments. I kind of agree that it has to look something like the original. Can’t wait for the reveal.