Upon further review … solid, but bulbous and not as refined as expected

Every once in a while I get to test a vehicle twice in a single year. It’s rare, but this week I had the 2013 Honda CR-V AWD EX-L with navigation, just one model year newer than the CR-V I had tested early last spring. 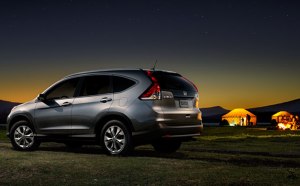 It confirmed my thoughts and observations, which cheers me that I didn’t miss the mark earlier. The good news, for the driver, is that this one was a pleasant Mountain Air (turquoise blue) color vs. the blah gray of the earlier model.

But, and I apologize if you feel you’ve heard some of this before, the CR-V remains a solid compact sport-utility vehicle with 5 more horses than the previous generation and a more rounded look. In fact, several friends and observers called the Honda’s rear-end ugly and too bulbous. It’s not attractive, but then few utes really are much more than boxes on wheels.

For the record when restyled for 2012, the CR-V shrunk a bit in length and height, but added 1.5 cubic feet of cargo space. In the past six months, the ute also has gained $420 in price, showing you the creep upward in vehicles prices that seems inevitable, even if many of us have stopped getting raises, or smaller ones at least. Guess that doesn’t happen in the marketing departments or executive suites among the car makers.

This highfalutin EX-L starts at $30,195 and with its delivery fee hits $31,025. It doesn’t feel that special to drive. I don’t mean to pick on the CR-V. It’s still a quiet, comfortable small ute that holds four adults comfortably, along with a copious amount of luggage.

Honda’s 2.4-liter i-VTEC I4 provides the CR-V 185 horses, which is pretty good, except that Honda sticks with its old 5-speed automatic transmission that does not shift very smoothly. Plus there’s an ECO button on the dash’s left side that once engaged will speed your shifts to keep your engine’s revs down and thereby save a bit of fuel. It did not seriously hamper acceleration, but you do notice it is on. Also green lights frame the attractive speedometer in the main gauge pod and light up when you are accelerating in an energy-conscious manner. That worked well and is very subtle. 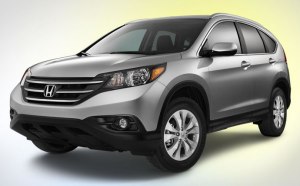 Ride was the only thing that struck me as much different, and I’m not sure why. It seemed bumpier to me, although last report I called the Honda’s ride a little choppy at times. Highway and suburban driving is well controlled and comfortable, which you might expect as the CR-V rides on a 103.1-inch wheelbase and features 17-inch tires.

Steering remains moderately light with a bit of wheel play and handling is OK with a little lean in tight turns. The standard all-wheel drive here will help you when the weather gets messy and traction and stability control are standard along with four-wheel discs brakes.

CR-V also comes with Hill Descent and Hill Start, features that help the small ute creep down a steep incline or start and gain traction easily on a hill. You also could use the Honda for light towing as it pulls 1,500 lbs. 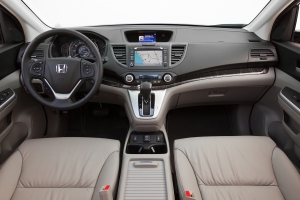 Inside, the interior is quiet and rationally laid out with attractive gauges. The test ute featured a brown over tan leather interior with tan leather seats and cheap looking fake gray wood trim on the dash and matte silver trim on the door pulls, steering wheel hub and center stack shifter area.

Honda still has key start, which is just fine, plus a tilt/telescope steering wheel. The tester had phone, radio and cruise buttons on the hub. Its navigation system and radio operate on a center-dash touchscreen, but the buttons around the screen are tiny and the radio volume knob also is small. The radio itself sounds fine with seven speakers and 328 watts of power. There’s also a subwoofer and the radio’s volume is speed sensitive.Honda uses a small screen atop the dash’s center for the trip computer, clock and compass functions. It is too far from the driver as the screen is recessed way back in the dash and its enclosure’s sides are angled exactly the wrong way for easy viewing. Yet the dual temperature control knobs down below the navigation screen are large and easy to use.

I like CR-V’s seats, which feature flat bottoms and mildly contoured backs that are firm, but comfortable. Both front seats offer two-level seat heaters and the driver’s seat is powered, including lumbar supports. There’s also plenty of head and legroom front and rear and the rear seats fold flat after you fold the rear seat bottom forward. Even without that, there is a load of room (37.2 cu.ft.) behind the second row seat and the cargo bed is low, so it’s easy to load and unload under the big power rear hatch.

The gear shift lever sticks out from the center stack at the bottom and the CR-V has two cup holders and a huge deep storage bin between the front seats with a sliding cover.

Overhead a power sunroof is standard on the EX-L, but the sun visors do not slide or feature extenders. That is poor for a vehicle costing $30+ grand!

I’ll reiterate, the CR-V remains a solid choice in the small ute market, but this top-end model is too pricey. There are many choices in this market, so shop around, before settling on a model. Other good alternatives are the Hyundai Santa Fe, Ford Escape and Toyota RAV4, to name three.

Hits: Useful, roomy ute for people and cargo. OK power and AWD helpful in winter. Inside the seats are fairly flat and comfy, with two-levels of heat, good gauge pod too. Gas mileage is decent.

Misses: Bumpy ride, moderate handling, automatic tranny isn’t smooth and this model was too pricey. Small buttons around the radio screen are tough to use as are the tiny touchscreen buttons. Visors don’t slide and bulbous back-end seems to put some people off.

Made in: East Liberty, Ohio