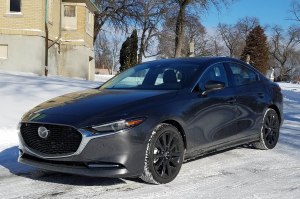 It’s possible that the current new generation of drivers will never know how much fun it is to pilot a car. Sad!

Crossovers and trucks are so big, so dominant in the marketplace that it’s almost unbelievable that some automakers are still making cars. Several have stopped, or scaled car models way back.

Thankfully Mazda is not one of them.

In fact, the Japanese automaker continues to improve its entry-level sedan/hatch the Mazda3. Last year it added all-wheel-drive to the sporty car and this year it ups the ante with a more powerful engine to deliver even more fun. Bravo!

Note that on regular lower octane unleaded gas the hp drops to 227, still powerful, and torque slips slightly to 310. I can live with that.

That turbo 4 is hooked up to a slick-shifting 6-speed that seems well mated to it. I experienced no turbo lag and the car is an absolute rocket in Sport mode, engaged via a toggle on the console. In Normal drive mode power is strong, but just not as impressive as when you toggle to Sport and really crank the ponies. I used it primarily when getting on the freeway.

Like any good sport sedan or hatchback the tested Turbo Premium AWD handles great too. Remember zoom-zoom? It’s still a part of most Mazdas. Steering is light, but precise and the Mazda3 is a blast to throw around corners and zip through curves such as those around the Holy Hill area. Cool too that this model has AWD so even in sloppy situations, which I had plenty of due to two major snowfalls, it was easy to control at speed.

Ride? Well Mazda3 has a long enough wheelbase at 107.3 inches to ride well, and my past test drives show improved ride. But last year Mazda returned to a torsion bar rear suspension, away from a multi-link. I’ve enjoyed driving many a car with torsion-bar suspension, but this one feels a bit choppy on our distressed Midwest roads. I felt this one was choppier than my previous test. You’ll definitely know when you square up on a pothole.

Outside, the Mazda3 touts a large, distinctive grille and fastback styling for both sedan and hatchback. I prefer the hatch’s smoother look, and its rear window wiper, a godsend in Wisconsin. 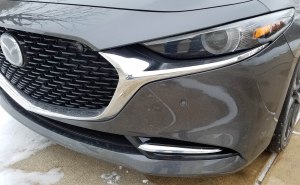 Yet the tested sedan is pretty spiffy too. I love the car’s pointy nose, sort of looks like a beak, reminding me of 1960s Eagle Indy and F1 racers.

Inside, styling is slim and youthful with black leather seats and soft inserts in the door panels, plus brushed chrome Bose stereo speaker covers and satin chrome trim on the wheel’s hub and buttons. The console’s top is gloss black.

The leather seats and soft touch door panels giving the Mazda3’s interior a luxury ambiance you don’t expect in an entry-level sport sedan that isn’t from a luxury brand. The front seats also are well shaped with good back support and a well-fitted butt pocket. The driver’s seat is powered and includes two memory settings while both front seats are heated, as is the steering wheel.

Rear seat legroom and headroom are moderate, but four average sized adults can fit in the sedan, while trunk room is decent.

Dash layout is fine and the screen that’s tucked in the dash’s top is large, nearly 9 inches, and easily viewed. My concern remains the console dial that tunes the radio and info screen. It’s not as easy to use as those with buttons by the screen, and certainly not while driving. The radio itself is strong, a Bose system with 12 speakers, and a 360-degree camera lights up on that screen when the car is in reverse, or it can be engaged via a dash button.

Other pluses include a sunroof, rain-sensing wipers, heated outside mirrors, dual climate controls. Heat comes on fast and gets quite warm so that 68 is a “hot” setting. 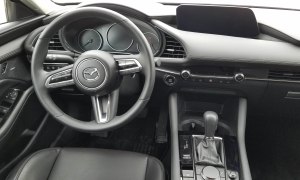 There also are paddle shifters for those who enjoy using them. Eh!

Then there is one big annoyance that would give me pause. Beyond that console dial for the infotainment screen is the park brake. This is not a problem in any other make’s cars or trucks. But Mazda insists on the park brake setting itself automatically whenever the engine is turned off. That means each time you start up you must press the brake release lever on the console. Sounds minor, but every time you put the car in reverse and the car’s brake holds you back it’s possible you’ll swear. My curse jar was full by week’s end.

I’d also like a wireless charger, which is optional, and a flat-bottom steering wheel if I’m driving a sporty car with this much speed and maneuverability.

Practically speaking the Mazda3 is a fine entry-level luxury sports sedan, efficient to run and purchase. Gas mileage with the SkyActiv-G engine is good, rated at 23 mpg city and 32 highway by the EPA. I got 25.0 mpg in a mix and with some heavy acceleration on freeway drives.

The tested top-level model with Premium Plus package and AWD lists at $33,395 and with just a special color and floor mats ended up at $34,015. That’s bargain territory for a car this well-equipped and this much fun to drive. 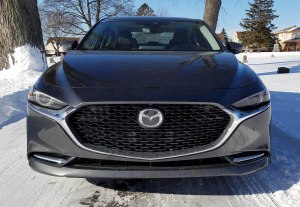 The Mazda3 may cost you a bit more than a Subaru Impreza (standard with AWD) or a Honda Civic, for example, but its luxury level equipment, styling and feel make it an easy choice. But please go with Soul Red!

Misses: Still not a fan of the console-controlled info screen, and ride is stiffer than many may like, and the park brake sets itself every time the ignition is turned off. SUPER annoying to disengage each time you drive the car. Wireless charging and flat-bottom steering wheel would be nice.