My appreciation of Aston Martin cars started as a 5-year-old with a little metal Matchbox DB2-4, was enhanced as a teen by watching James Bond mess up the bad guys in his DB5, and finally came full circle when I got to “briefly” test drive Aston’s new V12 Vantage at Road America in 2012. It’ll scoot!

But you know that and so does most of the automotive world that understands Aston Martin has racing at its heart. Vantage is simply its most recent racer that also is a road car. Its looks are divine, its interior sporty yet luxurious and its power mighty.

No wonder Autoart has reproduced one of the recent Vantage racers in 1/18 scale to reward Aston lovers around the globe. This is another fine composite die-cast sealed body model that will stun onlookers who see it on your display shelf. 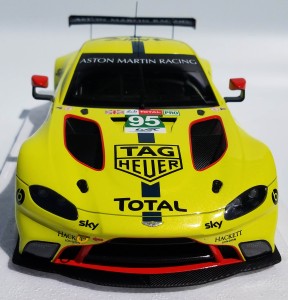 Consider its racing history, which started in 2012 when Aston moved from its DB9 model to the Vantage for endurance racing.

Aston Martin had beaten the Corvette Racing Team at Le Mans in 2007 and 2008 with its DB9-based racer, returning to European endurance racing after a long absence. History buffs may recall that Aston Martin raced at Le Mans from 1931 until 1959, often placing well, but it wasn’t until 1959 it actually won the prestigious 24-hour enduro with Carroll Shelby and Roy Salvadori at the wheel. Then Aston pulled out of racing for decades.

But the DB9 brought them back to the top and then Vantage renewed Aston’s championship ways winning the GTE Pro class at Le Mans in 2014 and 2017.

The 2018 Vantage racer Autoart recreates here is the No. 95 car Britain’s Darren Turner and Denmark’s Nicki Thiim and Marco Sorensen drove to 8th place at Le Mans. Thiim and Sorensen were the 2016 WEC GTE Pro champs. The trio completed 339 laps in 2018, ironically just one less than when Aston’s Vantage won its class at Le Mans the previous year. 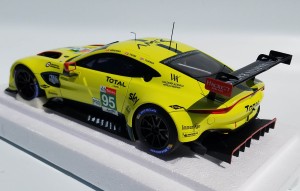 The racy Vantage is known for its 4.0-liter turbocharged V8 that creates somewhere north of 450 horsepower. The engine is actually made by Mercedes’ AMG race unit for Aston, and can achieve a top speed of roughly 190 mph. The engine is all aluminum and rides in a bonded aluminum chassis, while the car’s body consists of all carbon fiber panels. Total weight is just 2,745 lbs., about the same as today’s Nissan Versa subcompact, so light!

This Aston racer will be a bright spot among your die-cast display, literally. It’s flamboyant bright yellow paint scheme with black wing, diffuser, chin spoiler and body side air foils is stunning.

Sadly it’s a totally sealed body model, so no racy engine under hood and the doors don’t open for you to peek inside at the race car cockpit. That keeps pricing down though and besides, most of us display these models to show off their bodies, and this body is sweet.

All that black underbody and downforce creating wings resemble carbon fiber with a patterned surface, and this being a Le Mans racer (heck, any racer nowadays), there are even sponsor logos on the carbon fiber skirts, eight logos on each side.

Four sealed beam headlights are smoothly integrated into the nose with LED-look running lights just above the chin spoiler. The black grille is trimmed in red, as are the massive air vents in the hood and the diffuser in back. Aston Martin logos graces the nose and tail, plus that giant black carbon fiber rear wing proudly proclaims “Aston Martin Racing” too, as do black window bands front and rear. Wing endplates are red with Hacket London logos.

But the beauty, as with most models, is in the details such as the silver side-exit exhausts, giant red race mirrors on sturdy black supports, black fuel filler outlets in the roof pillars just behind the doors, and two antennas on the roof. There’s a pitot type tube up there too and a giant single wiper for the massive windshield. 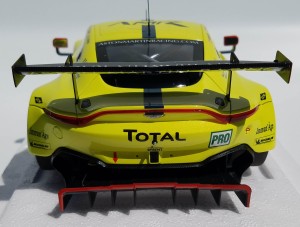 In back is the stylishly thin red taillight band that runs across the entire tail and the monster black diffuser that trumpets from the underside with small supports to hold it in place.

Big racing slicks with blue and yellow Michelin markings roll under this yellow screamer, and behind the black racing wheels are giant silver disc brakes with matching calipers.

The interior is tough to make out, other than you can readily see the silver roll cage through the rear window. Side windows are darkly tinted so viewing the interior requires a flashlight to shine inside, although you can see the wide dash through the windshield. Also, a driver’s headrest/restraint can be viewed through the left side window and it appropriately includes a RaceTech logo. With a light you can see the tiny aircraft-style racing steering wheel with its plethora of buttons.

Again, what you’re looking for though is a great body, and outward appearance and you get that here, as with other Autoart models. All the race day markings are here, including the Le Mans 24 Hours logo on the hood and doors, the white No. 95 on a green background, and all the sponsor logos and the three driver names above the doors.

Winner? Yes, and you may need sunglasses to view this bright beauty.