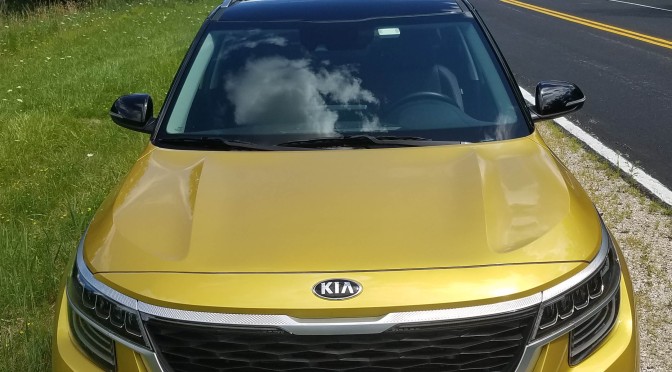 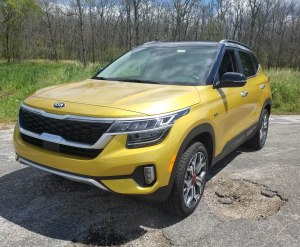 Some cars (or crossovers) just make you feel good. VW’s Beetle was one, the Mini Cooper another. It may be their looks, their ease of driving, their usefulness or simply their price.

Sometimes it’s all of that, which brings me to this week’s drive, the Kia Seltos SX Turbo AWD. Again, that’s a lot to take in from a name standpoint, but simply put, this is a fine compact crossover that borders on cute. Mine was a retina-burning Starbright Yellow, which I initially nicknamed Electric Mustard, but Electric Dijon may be more accurate.

This is not a vehicle that would be hard to find in a parking lot. It stands out like a scorching yellow dot in a black and white minimalist’s painting. It’s Shakira at an Amish picnic! 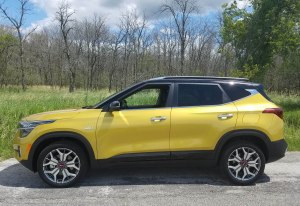 Yet Seltos, named after Hercules’ son Celtos from Greek mythology, is more than a bright sunspot on the exploding small to compact crossover market. It’s a stout AWD crossover in all but basic S 2.0 trim that will carry four adults comfortably.

This one had a black roof that along with its sizzling yellow paint scheme added $345 to the crossover’s cost. But really, when a well-equipped compact crossover starts at just $29,010, what’s a little extra for some paint?

That’s right, the new 2021 Seltos, which Kia says represents the “brave and assertive spirit of Celtos,” but with an S implying speed and sportiness, is low cost, high value. That’s a key Kia selling point throughout its lineup. A base S 2.0, either without AWD, starts at $23,110, including delivery fee. That’s the same price as the LX model with AWD, but not the active safety features found on the S 2.0 model. Confused? I was, but consider there also are EX, S Turbo, and SX Turbo trims, and those are likely the ones most folks will favor. 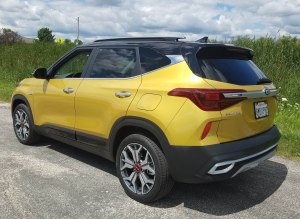 My tester was the top-end SX Turbo meaning it had Kia’s peppier 1.6-liter I4 turbo that kicks out 175 horsepower and a boisterous 195 lb.-ft. of torque. The S Turbo has the same engine, while all other models pack the base engine, a non-turbo 2.0-liter I4 with 146 horsepower, still not bad for a vehicle of this size, just 172 inches long with a 103.5 inch wheelbase.

That shorter wheelbase normally would translate into a jittery ride, but the Seltos was well controlled just transmitting small bumps to the occupants on our crater-strewn streets. An independent rear suspension helps the ride, while the base model, and many other small crossovers, feature a torsion bar rear suspension. The SX Turbo also was quiet and calm on the highway, much quieter than one might expect.

The power is fine in Normal drive mode too with just some slight hesitations upon acceleration, particularly when the Seltos was freshly started. That smoothed out quickly and turning on the Sport mode put more pep in its step immediately. Tap the gas pedal and the crossover responds, plus steering effort firms considerably in Sport. Kia also offers Smart mode, which apparently is so smart it learns your driving habits and adjusts shifts from the fine 7-speed tranny to mimic your normal driving patterns. I perceive little difference in Smart mode, but maybe if I had the vehicle for more than a week its shifts would seem more Savagelike! 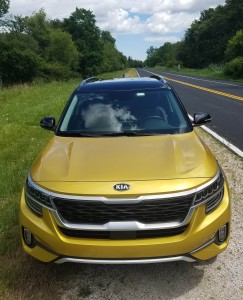 Otherwise handling is light and easy, a nice city or highway driver, plus there are 18-inch tires underneath and the AWD will come in handy once the winter slop arrives. Many small crossovers either don’t offer AWD or charge a couple grand more for it, that feature alone makes Seltos a fine value for upper Midwest buyers.

Gas mileage is appealing too, the test vehicle rated at 25 mpg city and 30 mpg highway. I managed 28.6 mpg for the week with a fair mix of both driving conditions.

Naturally Kia is generous with safety equipment, something it and partner Hyundai have been leading with in their value-oriented lineups for several years. 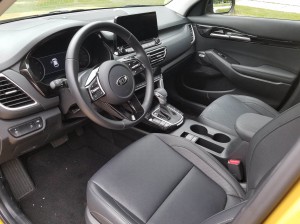 Seltos’ interior is nicely designed. Seats are black perforated leatherette in the SX and the dash is black textured plastic. Door trim is mostly plastic, but with soft leatherette inserts. Trim is mostly gloss black, what many folks are now calling piano black, while door releases are satin chrome as are the air vents and stack’s trim. The tilt/telescope steering wheel has piano black spokes and there are black Bose speakers in the doors.

In fact, the Bose system is an upgrade in the SX with sound-connected lighting. Other upgrades for the SX include a larger 10.25-inch display screen (an 8-incher is standard), LED headlights and fog lights, 1-year of satellite radio, a 7-inch color instrument cluster, smart cruise control with Stop & Go plus semi-autonomous driving assist, wireless phone charger, automatic climate control, and a 10-way power driver’s seat.

Dash layout is excellent and the large touchscreen easy to use and includes a navigation system. Other buttons and knobs for climate controls, etc. are large and easy to use too. Kia and Hyundai are among the logical, easy-use dash design leaders.

Seltos’ seats are comfortable too with mild bottom cushion contouring and better back cushion support. It was easy to find a good driving position and there was plenty of head and legroom front and rear so four adults could ride comfortably here. Better than some sedans I’ve tested recently, oh, and the front seats are heated.

There’s good storage behind the rear seat and that will split and fold down for generous cargo room. The rear hatch also has a wiper, but the hatch is not powered here, and doesn’t need to be. It’s light enough to be easy to raise and lower. 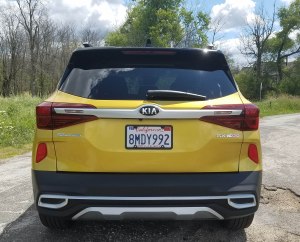 The only thing missing, really, is a sunroof. But at this price I could forgo that. It’s a $700 option.

And there was only one real annoyance during the test drive and that came after the engine was off. A chime rings and the instrument panel lights up with a “check rear seat” warning. That wouldn’t be bad if you had something in back, but to chime every time the car’s ignition is turned off is a bit much.

Which brings us back to pricing and other trim levels. The test car added just the fancy color and then floor mats at $130. Don’t get me started on whether floor mats should be standard on all cars. So the final tally was $29,485, about $6 grand below the average cost of a crossover these days. That’s value.

Kia also offers a lot of choices via its trim levels.

As mentioned above the base S 2.0 is the same price as the LX, but with the S you get front-drive and active safety equipment. In the LX you get AWD, but less safety equipment. That’s how Kia balances out the price to keep it the same on both entry-level models.

Probably makes sense for most folks to move up to the EX model that has both AWD and the safety features as standard for $26,410. Plus you get blind-spot warning and assist, rear cross-traffic alert and avoidance, a sunroof, heated front seats, leatherette seats and wireless charging, but still the smaller engine.

The S Turbo offers the peppier engine and 18-inch wheels in addition to the EX trim’s upgrades and finally the SX Turbo that was tested is fully loaded, with only a few options available, including that sunroof.

Seltos competes with the likes of Toyota’s C-HR and Chevy Trax, Hyundai Kona plus Mazda’s CX-3, Honda’s HR-V, Subaru’s Crosstrek and the Jeep Renegade. It’s cuter than most. In the Kia lineup the Seltos slots between the Soul and Sportage. And the Soul still doesn’t offer AWD.

For families seeking low-cost, high value and AWD. Seltos is a new model worth a test drive. 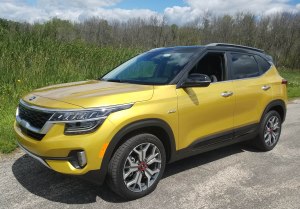 Misses: No sunroof and annoying “check rear seat” alert chime each time you turn off the ignition.

Made in: Gwangju, South Korea