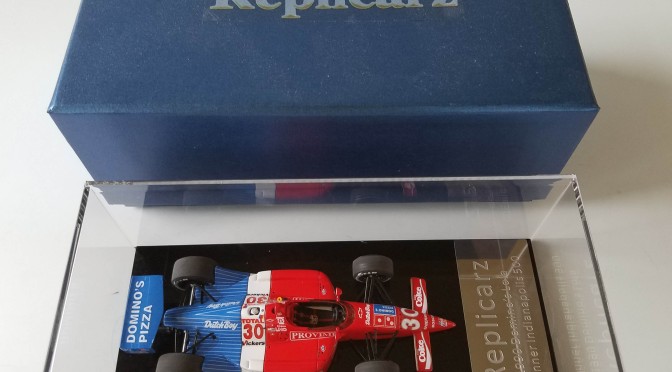 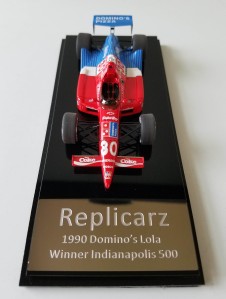 Back in the 1980s when I was covering the Indianapolis 500 for the Milwaukee Sentinel newspaper Arie Luyendyk was our hometown racer.

How’s that? Arie is Dutch.

But the likeable Indycar driver was sponsored by Provimi Veal, a Wisconsin company with a Dutch owner, so Arie was our guy. He was eager to talk to the media and it wasn’t long before he knew the Wisconsin reporters by sight. So it wasn’t a surprise when Arie and his wife gave us reporters stuck in race day traffic a friendly wave as he zipped into the Indianapolis Motor Speedway on his motorbike. 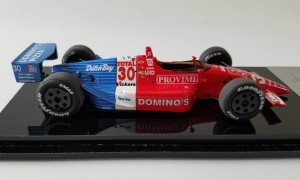 So I have a fondness for Luyendyk. When he won his first Indy 500 in 1990 it was a popular win and he drove a spectacular red, white and blue Lola with Domino’s Pizza sponsorship, and yes, Provimi Veal was still backing him.

About six months ago Replicarz delivered a beautiful 1/18 model of the 1990 winner and now for those of us on a tighter budget, and/or less display space, it delivers a sharp 1/43 scale die-cast resin model.

The Lola chassis was one of the leading Indycar platforms in the 1980s and 1990s and its sharp pointed nose made it look fast from the get-go. 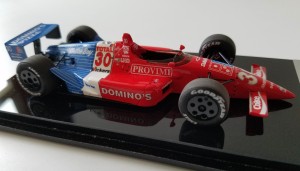 1990 was Luyendyk’s year, his Chevy-powered Lola held together for the full race, which usually assured that Aries would finish in the top five. This time he started on the outside of the front row for Doug Shierson Racing, one of the better teams that wasn’t a Penske, Pat Patrick, or Newman/Haas entry.

Luyendyk ran in the top three much of the day along with Bobby Rahal and Emerson Fittipaldi. By lap 168 his car was the best handling of the leaders and he passed Rahal, never relinquishing the lead. The 1990 Indy win was his first IndyCar victory and the first time he led at Indianapolis. Arie had been Rookie of the Year in 1985 when he finished seventh. 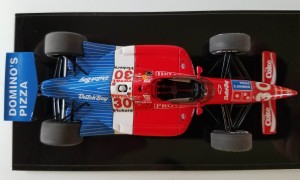 Ultimately Luyendyk won Indy again in 1997, sat on the pole three times and his 4-lap qualifying record of 237.498 remains the fastest ever at the Speedway.

Like the spiffy 1/18 scale model earlier, this Lola is a crisp replica of Luyendyk’s winning car, with all the race-day sponsor stickers and sharp details all around. Of course the body is beautifully sculpted. 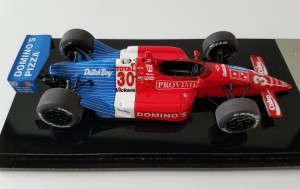 The main visuals here are the red, white, and blue paint scheme that is red from the roll bar forward. Here there’s the Domino’s logo along with those of Coke, Dutch Boy, Bosch and Total. Provimi is on the side of the cockpit and Domino’s is on the sidepod with another on the blue rear wing.

Total and Vickers logos grace the white stripe on the engine cover and Dutch Boy is located on the blue tail with white pinstripes.

The car’s No. 30 is prominent on the engine cover, nose and wing’s side plates. 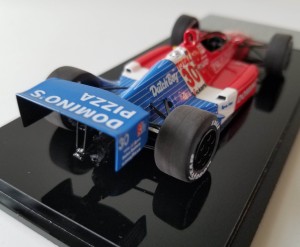 Tires are appropriately labeled Goodyear Eagle slicks and the main suspension pieces are finely executed black gloss. Delicate side mirrors project from the thin clear windscreen and red seatbelts and a photo-etched metal seatbelt clasp lay on the black seat inside the cockpit. There’s a black steering wheel and small gearshift knob on the right side of the cockpit’s tub.

Like the real deal, this 1/43 scale Indy winner looks terrific, and easily fits in any display. As with other Replicarz models in this scale, the car is mounted on a black gloss base with chrome nameplate and a fine acrylic case. 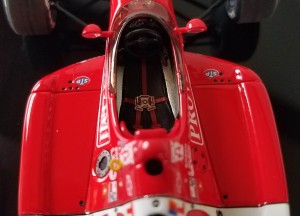 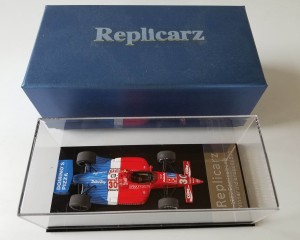