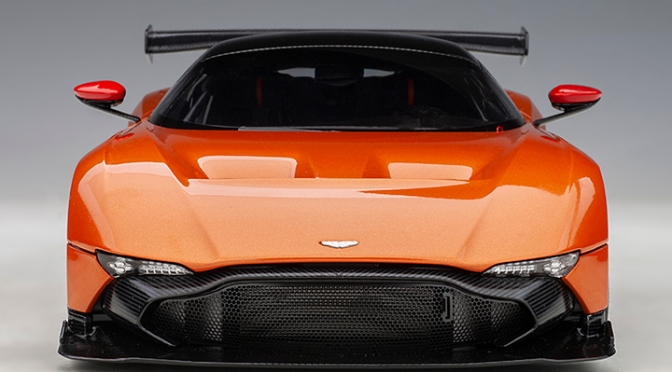 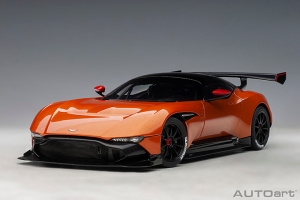 It also stirs thoughts of high speed and equally high prices. Well, Autoart’s new Aston Martin Vulcan lives up to those later images, as would any original Aston. This one is 1/18 scale though and oozing with detail that helps justify its $220 price tag. But that’s nothing compared with the 1/1 scale’s $2.3 million suggested retail sticker.

Vulcan is a decidedly newer car than that iconic DB5 and in real life is bathed in carbon fiber bodywork and rides on a lightweight aluminum alloy chassis. Total weight is just less than 3,000 pounds.

The front-engine, rear-drive Vulcan was launched in 2015 and sold through 2016. But only 24 were made for worldwide consumption and they are not street legal, entirely meant to be driven on a racetrack. Ah, the rich, they can have such fun with their toys! I’d want to blast around town and area freeways if a 1/1 version was in my 60-year-old garage.

Supercars like this are styling exercises and super halo cars for luxury performance brands like Aston Martin. These show what a brand’s designers can do, while also providing a few folks a car that will hit more than 200 mph and is rated at doing 0 to 60 mph in just 3 seconds. That’s slightly less than $1 million per second of performance from the massive 7.0-liter naturally aspirated V12 under its long, lean hood.

Officially the Vulcan creates 820 horsepower. Wow! And without a turbocharger.

Aston’s Vulcan features a prominent carbon fiber chin spoiler and a massive carbon fiber rear diffuser that helps the racer create more downforce than a GT3 race car. The internet assures us that would be enough downforce to drive the car upside down, in theory. You go first!

As for the stunning model, our review car was a gorgeous Madagascar orange, an in-scale sparkly orange with a black carbon fiber-look roof. And like the real deal, this model’s front spoiler, rear diffuser and giant rear wing all appear to be carbon fiber. In fact, the skirts along the car’s sides that wrap around dual exhausts also carry that carbon fiber appearance.

The Vulcan’s hood opens forward with scale supports and exposes more carbon fiber-look chassis pieces and that muscular V12 with small Aston logo atop. You also can see the twin radiators and fans in the nose, hoses leading to the turbos and giant spring-over shocks that are blue with red springs. Cool! 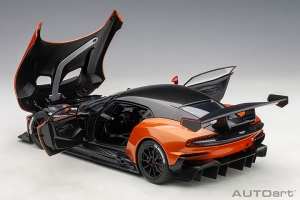 The composite-bodied model has twin doors that open wide to offer a good glimpse inside the racer. Interior is black and gray, the race seats being gray with a red accent stripe mid-seat cushions bottom to top. There are head and neck supports built into the seats, a roll cage, and detailed dash, console and steering wheel. The later is a race wheel, flat bottom and no top, resembling an aircraft pilot’s control yoke. Buttons and gauges are visible on the console and dash and a fire extinguisher is strapped to the passenger’s side metal-look floor.

Back outside there are slim racy red side mirrors, a photo-etched metal gas cap and string-bikini thin headlights. A metal and carbon fiber-look accent graces the front fenders, just behind the wheels to give them almost a winged-wheel look. While the gaping racer’s mouth, or nose is filled with black PE mesh. Meanwhile, Vulcan’s amber taillights are beautifully wrapped around the rear wing’s support, another aid to downforce.

Ultimately this is a beautiful racer, but with a clean body not all mucked up with numbers and sponsor logos. And you can get it in this awesome orange, or apple tree green metallic green, white with red and blue stripes, or matte black with lime green trim. All look terrific! 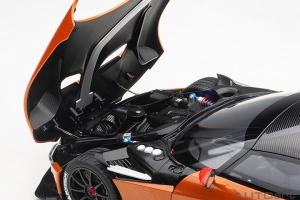