Dutchman Arie Luyendyk was a consistent top-tier competitor in IndyCar during the 1980s and 1990s, but he had never won an Indycar race until the 1990 Indianapolis 500. What a place to start.

He went on to be a two-time Indy 500 winner, but his first was special because he beat the top racers at the time, Bobby Rahal, Emerson Fittipaldi, Rick Mears and Al Unser Jr. And he set a record in doing it, running the 500 miles at an average speed of 185.981, a record that lasted until 2013.

Luyendyk was Indy’s Rookie of the Year at Indy in 1985 when he finished seventh, and always ran well at the Indianapolis Motor Speedway. He still holds the record for the fastest 4-lap qualifying run and fastest single lap, 237.498 mph. Ultimately, he won 7 Indycar races and three Indy 500 poles. He’s a legitimate Indy 500 star.

Luyendyk drove for some of Indycar’s top teams, qualified well and finished in the top 5 at many Indycar races, but his cars often failed to finish. However, the Lola racer he drove in 1990 was flawless all month. He started third in the Doug Shierson Racing Lola and ran in the top three most of the day.

Fittipaldi led early, followed by Rahal, but Luyendyk passed Rahal on lap 168 and never was seriously challenged afterward as Rahal’s car was having handling issues and Fittipaldi had dropped a lap off the pace with tire blistering problems. Emmo passed Luyendyk on the white-flag lap to finish the race on the lead lap.

Ironically this was not only Luyendyk’s first Indycar win, but the first time he had led the Indy 500, and it was Lola’s sole Indy win during its run from the 1980s until it left the series in 1996. A pure Lola chassis also had won in 1966 with Graham Hill. Power for Luyandyk’s racer came from an Ilmor-Chevrolet V8, a popular choice at the time.

Fit and finish are stellar on the Replicarz model with the pinstriping on the blue portion (Dutch Boy) of the tail being precise and perfectly running up the winglets in front of the rear wheels. All logos look sharp and there are photo-etched screens tucked inside the tunnels on the car’s sidepods.

This is a sealed body car, so the engine cover doesn’t pop off. What you see is the transaxle and wing support in flat black extending out under the blue wing sporting the Domino’s Pizza logo. Wiring is evident and gearing is visible in back and those big fat Goodyear Eagle tires look scuffed and the racer’s wheels wear the cool black 6-hole wheel covers that were used at Indy that year for streamlining. 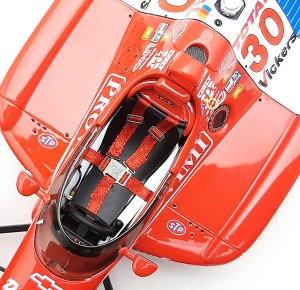 Just behind the cockpit on the driver’s left is a metal-ringed fuel filler and a tiny delicate looking yellow ring just below the roll bar. Behind that hoop is the popoff valve used to limit speeds at Indy. And all the black suspension parts at each corner are a sturdy metal.

The cockpit is surrounded by a smoky, tinted windscreen and there’s a handsome red restraint system with photo-etched buckles atop the flat black seat with red headrest area featuring a Lola label.

The surrounding cockpit area looks like black carbon fiber and the dash has minimal details, but includes two raised areas to represents warning lights. The three-spoke steering wheel is flat black and there’s a gearshift box to the left and weight-jacker controls to the right. Red mirrors flank the cockpit on the windscreen and feature mirrored faces.

The 1990s still featured beautiful sleek racers at Indy, so it’s nice to see Replicarz begin to mine that era of Indy winners. 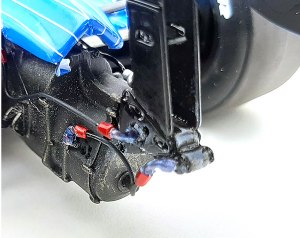