Not that long ago Honda’s Pilot was a boxy ol’ thing that frankly was as stylish as a shoe box jacked up on 20-inch wheels.

But like its chief rival, Toyota, Honda seems to have suddenly gotten the word that blah styling doesn’t help you stand out in a crowded market. Brilliant!

So the 2019 Pilot finally gains a bit of style with more rounded edges, creases in the hood and a chrome trim line above the grille that wraps around the front fenders over slimmed down headlights.

Is this a radical restyle? Well, no. But it makes the Pilot a lot easier on the eye and less frumpy. That’s particularly good because mechanically Pilot remains a stellar large SUV that competes well with the likes of Subaru’s new Ascent and Volkswagen’s new Atlas. Other mainline competitors include Ford’s Explorer, Toyota’s Highlander and Mazda’s CX-9. 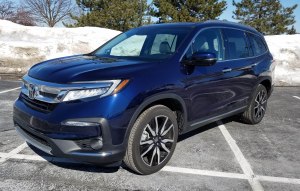 Power, ride and handling are all pluses for Pilot. Sure, the Ascent, Atlas and CX-9 feel a bit more responsive and, dare I say, sporty, all things being relative in the world of large utes.

But the 3.5-liter VTEC V6 with variable cylinder management will deliver ample horsepower at 280 and solid torque ratings at 262. This means you can tow up to 5,000 pounds with a front-drive model or 3,500 pounds with the tested AWD unit.

Acceleration is good and steady, rolling this big boy up to highway speeds with ease, even with four folks aboard. The 9-speed automatic tranny also does a nice job of smoothly slipping the Pilot gear to gear. This transmission is only available in Touring and Elite models though, a 6-speed comes standard at lower levels.

Handling is fairly responsive and easy to control on the highway. Not any lane wander as you can find when driving some big utes.

I liked the ride too. Crumbling Wisconsin roads and railroad tracks didn’t phase it much, mostly softening ride to semi-luxury levels. Big potholes and spread out expansion joints (thanks old man winter) did create a bit of bounce, but ride never became uncomfortable. A little softer springing may help the overall feel, and you might expect that in upper level Pilots like the tested Elite model.

AWD also helps give the vehicle better traction in snow and slush. I dealt with a little, but luckily the spring melt began shortly after I received the dark metallic blue test SUV.

As with many high-end vehicles, the Pilot also comes with a Sport mode that allows the driver to increase low-end acceleration, plus Intelligent Traction Management that allows one to set the AWD system for snow, mud and sandy surfaces. All good and Hill Start Assist also helps keep the SUV from rolling backward when starting up a steep incline.

Safety features abound, as you’d expect in the top-level Pilot. Honda Sensing is standard and that includes smart cruise control, collision mitigation braking, lane keeping assist and road departure mitigation. Some fancy words there, all meaning sensors vibrate the wheel if you are drifting over lane markers and they automatically trigger the ute to push you back to the lane’s center if you’re drifting too far. All this is most useful when driving on the highway.

Thankfully Honda allows drivers to still control the car at will. You can press a button on the lower left dash to disengage the lane departure system. That’s great for city driving where pot holes and construction often dictate you straddling a center line to avoid mayhem.

Functionality is vital for any big SUV, but interior comfort counts for a lot too, especially for families, and the Pilot has comfort well under control.

Seats are mildly contoured and the Elite has first and second row captain’s chairs and a fold-down split third row seat, so would seat seven. A center row bench seat also can be ordered to make Pilot an 8-passenger vehicle, although you likely wouldn’t want to take a long trip with eight folks aboard, as seat space would seem cramped. But it would be perfect heading to a soccer game or swim meet with the kids and their friends.

Front seats are powered and there’s a two-memory function on the door for the driver’s seat. The driver’s seat also powers back when the ignition is turned off, making for easier exits. In addition, the front seats are both heated and cooled while the second row seats are simply heated. A heated manual tilt/telescope steering wheel also is standard on the Elite.

Big interior pluses include dual sunroofs, a smaller one in front and larger one over the rear seats. In addition, the Elite model comes with a wireless phone charger under the dash’s center stack, and rear seat folks get a flip-down screen for viewing DVDs on a long drive. That system comes with wireless headphones and the kids can adjust everything themselves, but mom and dad control what DVDs are loaded into the player from the front seat. Smart! 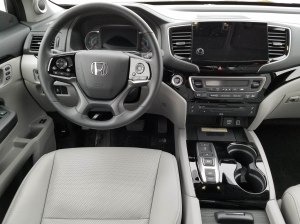 The hatch is powered in back and can be opened internally or via the key fob or motion when standing behind the Pilot.

Interior room is spacious and all the dash controls are well laid out for easy use. Pilot’s big touchscreen works well and sometimes responds even when you’re wearing gloves. I found a hard direct tap would change the stations most times.

Climate controls are handled via buttons and a smaller screen lower on the dash’s center stack. Again, everything is clearly marked and simple to use.

The only thing that took a little getting used to was the push-button transmission with its buttons atop the console. Park and Drive require a straight-down push to engage, while Reverse requires the driver pull back slightly on a button. A shifter feels more normal, but one would likely adapt to this fairly quickly. Also good, if you forget to put the SUV in Park (hey, it could happen), but turn the ute off, the Pilot automatically shifts to Park when the ignition turns off.

A couple other points to ponder, there are big sun visors that flip and slide, wipers are rain-sensing, the side mirrors are powered and will fold flat, and there’s a separate heating system for the rear passenger areas.

Gas mileage is as you’d expect in a large ute. The EPA rates Pilot at 19 mpg city and 26 highway. I got 20.8 mpg in about an even mix of city and highway driving. My fill-up was about $40 for a week’s drive.

Obviously the Elite is loaded and leaves its owner wanting for little. That’s why it starts at $49,015, including delivery. The test vehicle added no options.

A base LX model with front-wheel drive starts at a more modest $32,445 and AWD adds $1,900 to the price for any trim but the top two, which feature AWD as standard.

The popular mid-level is the EX-L and adds leather seats and many of the features families want. It starts near $39,000.

So from basics to luxury the Pilot has this segment covered, and now it accomplishes that with a bit more style.

Misses: Some bounce on major road bumps. Push-button transmission takes some getting used to.

Made in: Lincoln, Ala.