Picture a blue and orange Gulf liveried racer and you’ll likely conjure up either a Ford GT40 or Porsche 917.

Both were iconic racers in the late 1960s and early ’70s and now Porsche is fast approaching its 50th anniversary of the 917’s win at Le Mans. Porsche’s first overall win at the famous French racetrack occurred during the summer of 1970.

Brumm, which has been making fine, yet affordable 1/43 scale die-cast racers and European road cars for 47 years itself, marks the anniversary with a series of Porsche 917K releases, all in Gulf trim. 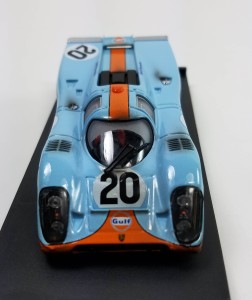 Of course, only one Porsche won, the race, the others are team cars, plus there are two models of 917s that ran in the 1000km endurance race at Spa in 1970.

Our review model was the No. 20 Porsche as it appeared after the race.

For the record, No. 20 was driven by Jo Siffert and Brian Redman, both noted endurance racers, and it was competitive. It ran among the leaders, but lasted just half the race, dropping out after 12 hours with engine problems.

It was a similar car, entered by the Porsche Salzburg team and driven by German Hans Herrmann and England’s Richard Attwood, that won Le Mans in 1970. Porsche’s win at Le Mans came after 20 years of trying. But 1970 certainly was not Porsche’s last Le Mans triumph. The make’s most recent win came in 2017.

Of course, today most of the road racing endurance prototype cars look like clones of each other. But back in 1970 the Porsche’s long flattened tail and wing gave it more downforce and coupled with Porsche’s monster 4.5-liter air-cooled flat 12-cylinder engine, gave it a top-end speed of nearly 250 mph on track’s famous Mulsane Straight. Ironically the K models were considered short-winged models as a longer-bodied L version also was run.

Drivers complained the L version was unsteady at the high speeds run at Le Mans, most preferring the K model even though its top-end speed was less than that of the L models. It was more stable and less prone to accidents.

The sample racer is the “as raced” model, the reason for the R at the end of its product number – R493R. Brumm now makes about 500 models, so this is model 493 in the lineup.

What has always amazed me, and I admit to collecting Brumm models for years, is the quality of the look and finish for a modest price. This one lists at just less than $50, while many new 1/43 scale models now push $100.

These are made in Italy and their fit and finish look great, and accurate and the car’s dimensions also appear true to the original. Head and taillights look realistic too and there are two chrome gas caps atop the bodywork and a single plastic windshield wiper. Look closely at the big windscreen and you’ll see the “raced” effect, a dirty windshield with an obvious wiper streak. 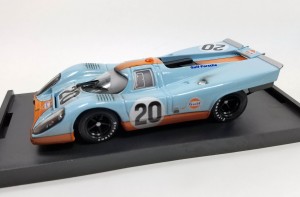 There’s also black grime by those gas caps, the fender vents above the fat front race tires and the nose also is blackened a bit, as are the rocker panels along the racer’s side. The Porsche probably could look even grungier, but most collectors still want to see the No. 20 on the nose along with the orange and blue Gulf Oil logo. So maybe one can imagine this is the car after several hours of racing.

Side cockpit windows also are fogged with grime, but you can see the driver in his reddish-orange driver’s suit inside as he holds the black steering wheel. 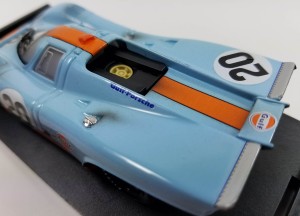 In this era race cars were thankfully devoid of the corporate logos that smother today’s cars. Other than four round Gulf logos, there’s a simple dark blue Gulf-Porsche label on the rear bonnet. Plus you can see a black covering on the engine and white turbo wheel. In back the tail displays a small silver wing extension. Wheels are black 5-spoke racing wheels and the racing slicks carry Firestone labelled sidewalls.

Love the detail and the value here that allows collectors to fill the voids in their race car collection at a modest price. 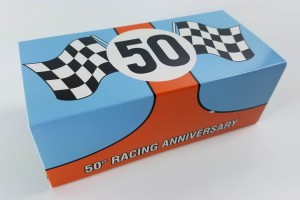