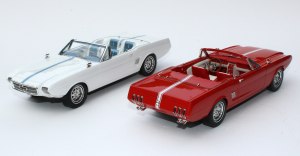 If you’re a Mustang nut, and let’s face it, there are lot out there, you’ll likely know the story of the 1963 Mustang II concept car.

If not, hang on and just know that Automodello is producing two versions of the rare one-off concept car used for several months to hype the production car that debuted in April of 1964 at New York’s Worlds Fair.

Automodello plans 1/24 scale die-cast resin models in the original white with a blue stripes, and another very limited Tribute Edition, in red.

After the two-seat mid-engine Mustang I’s debut at Watkins Glen’s F1 race in 1962, Ford’s brain trust decided it needed a concept car closer to the reality that was to be launched in 1964 on Ford’s Falcon platform. 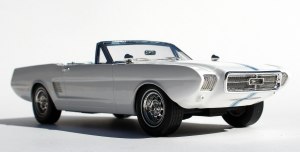 So Ford designer John Najjar went to work and then had Dearborn Steel Tubing fabricate the concept car of steel reinforced by fiberglass. The car kept some styling elements from the Mustang I, including the triple-bar taillights, although elongated, and the fake side louvers.  The car also featured a sculpted headlight treatment and no bumpers front or rear, plus spearlike fenders.

Built as a coupe DST ultimately cut off the roof to make it appear as a roadster, although no working top was ever created for the concept, just a removable top.

Inside, it used various Falcon components, primarily the aircraft style instrument cluster. Upholstery was all handmade.

Power would come from a 271-horsepower 289 cu.in. Ford V8. While mostly stock it used trick lifters that were created to make the Mustang II sound like a race car when started – great marketing for a show car.

And that’s exactly what this was, a show car that traveled around prior to the Mustang’s April launch. The Mustang II debuted, as Mustang I had, at the Formula One race at Watkins Glen, N.Y. in the fall of 1963, just five months before the 1964 ½ Mustang’s launch.

Eventually the Mustang II was donated to the Detroit Historical Society where it remains in storage. It rarely is displayed.

There’s no mistaking this as anything but a Mustang.

While the spear-shaped front fenders are a bit extreme, the profile still says Mustang and Automodello does its usual fine job of beautifully sculpting the car’s resin exterior.

We’ve only see the prototype, but the front grille, also unmistakably Mustang, complete with rectangular inset for the iconic pony logo. Detailing is precise and attractive. There are screened front lights and the stretched (extra tall) rear taillights that look realistic. 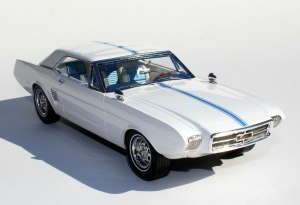 Twin chrome mirrors rest on the front fenders just in front of the chrome-trimmed windshield. The chrome wheels look great too, as do the twin dual exhausts that grace the car’s rear. Door handles also are chrome.

As with other Automodello models, this is a sealed-body replica, so no opening hood or engine detail. But the interior is handsome with a  blue dash and seats with blue center cushions and white outer edges. The dash detailing is sharp too.

Automodello plans just 299 pieces as the Standard Edition model in white with blue stripes, while a special Tribute Edition specifically authorized by Ford will consist of just 50 hand-numbered models in Tribute Red. Note too that Automodello now will be the sole source for all of its models, no matter their size. So look for these at Automodellow.com or Diecasm.com