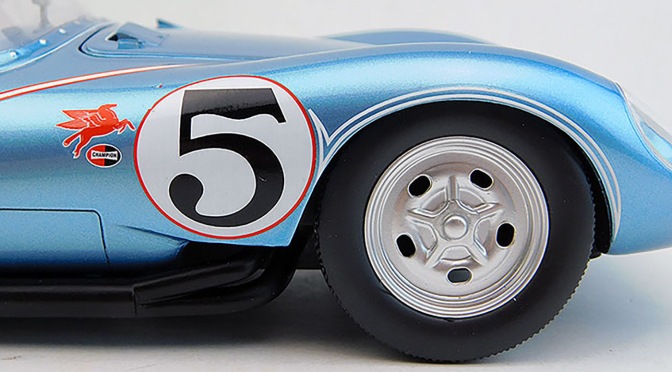 This beautiful Scarab won Riverside in 1958 … 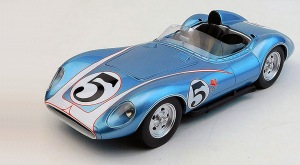 First came the 1959 Scarab that Jim Jeffords drove to a win at Meadowdale, but now Replicarz delivers the first Scarab to win a sports car race. This beautiful bright light metallic blue racer is a replica of the one Chuck Daigh drove to victory at the Riverside International Grand Prix in California in 1958.

Replicarz exclusive lineup of Scarabs are cast resin, so feel substantial and are magnificently shaped with their sexy bulging fenders and long hood. This is a 1/18 scale model with great shelf or display case presence.

For those who may recall our earlier Scarab review, this will be a bit of a refresher.

Scarab’s grew out of the imagination of Lance Reventlow in the late 1950s. Reventlow’s father was a count and his mother the heiress to the Woolworth retail store fortune. So Lance had some cash to go racing with. 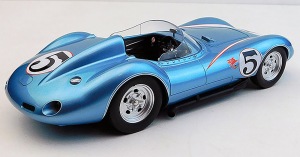 But he was a talented racer and soon figured out that to be competitive with the Ferraris, Jaguars and other European makes at the time he’d have to create his own racer. The manufacturers sold their seconds, and year-old models to their customers so that the brand’s team cars were always the latest and greatest things on wheels.

So Reventlow hooked up with racecar designers Tom Barnes and Dick Troutman and the Scarab was born.

This beauty rode on a space-frame that weighed just 127 lbs., keeping it light and racy. After some rules changes regarding engines, the Scarab designers settled on a special-built Chevy engine, a 283cid V8 that created a massive, for the time, 365 horsepower. The car is known to have hit 192 mph at one point, and handled well too. So Scarabs became the sports cars to beat during the late 1950s and early 1960s.

As with Replicarz’s earlier purple version representing the 1959 win by Jeffords, this blue model’s finish offers a luster that alone will make this racer stand out in any collection. 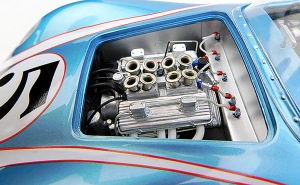 Likewise, the hood easily comes off to reveal the Scarab’s awesome Chevy V8 that was special built for racing. This is fully plumbed and wired with short tilted velocity stacks that give this engine a bit of personality and may entice you to pose it without the hood.

Headlights are enclosed, much like other racers of the day, and look brilliant here. Likewise there’s a fine black mesh in the car’s large oval mouthlike opening at the nose. In back are small red taillights and a silver gas cap inside the left rear fender, next to the sleek rear fine that forms the driver’s roll bar. 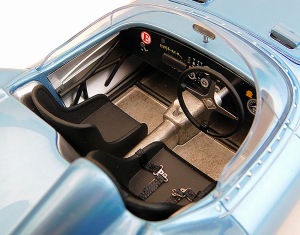 Not many logos on racers in the late 1950s, but this has Pegasus, the red Mobil Oil logo on each side of the car.

Inside the cockpit is a weathered metal floor and two black bucket racing seats with cloth seatbelts and metal buckles for the driver.  The dash too is impressive with a variety of detailed gauges and black 4-spoke steering wheel. The Scarab also has a white ball shifter on the tranny that runs between the seats too. 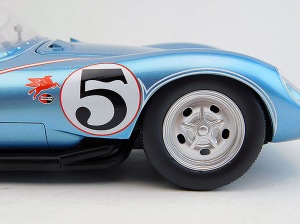 Replicarz also plans a 1958 version of the car Lance Reventlow drove to a win at Santa Barbara, Calif., and the Scarab’s final victory when Augie Pabst won at Continental Divide Raceway in 1963. No release dates have been set for those models, but we look forward to seeing them soon.  –  Mark Savage