As the world turns toward an all crossover and SUV automotive market it’s encouraging that the likes of Mazda continues to try and design sharp-looking vehicles that drive more like sports cars than trucks.

The CX-5 has been one of Mazda’s standout performers for several years and this iteration just moves it along the developmental road another half mile or so.

Just one engine right now, and that’s its fuel-efficient Skyactiv-G 2.5-liter 4-cylinder that cranks 187 horsepower and a similar 186 ft.-lbs. of torque. That’s up 3 hp from the last CX-5 and when in Sport mode, engaged via a console toggle, feels downright horsey. I found it easy to toggle to Sport at a stoplight and then power away quickly before toggling back to Normal mode to save fuel.

You find yourself wanting to do that because its 6-speed automatic delivers only moderate power via the Normal mode. It’s fine around town, but once you escape to the highway you’ll want the acceleration that Sport mode delivers. And you’ll remember to downshift to Normal as the engine whines pretty loudly in Sport, refusing to downshift itself even once you settle in at highway speeds.

Easily the biggest feather in the CX-5’s performance cap is how it handles. Handling is responsive with a moderately heavy steering wheel feel. But turn the CX-5 into a tight corner aggressively and it knows what to do. The Mazda corners well, with little lean and the road feel is more akin to a sports sedan than a crossover, making it fun to drive.

Ride is helped by its 106.3-inch wheelbase and a suspension tweak last year has given the CX-5 a better overall ride than it had had before. It always has been sporty, meaning firm. It still is, but less jostle now to make it more family friendly.

Mazda’s four-wheel disc brakes give it good stopping power and the tested GT model rides on 19-inch tires. Oh, and then there’s the full-time AWD that will help in sloppy weather, something we’ve recently been reminded is common in Wisconsin, even in April.

Inside, the sexy CX-5 features a black over white leather interior with white seats, chrome air vent and gauge surrounds, a gloss black console top and fake wood and chrome door inserts. This looks sophisticated and more upscale than the Mazda’s price indicates.

The leather seats are comfortable, mostly. The butt pocket is a bit tight, but there’s moderate back support and the driver’s seat has 8-way power controls, including lumbar support. Standard too is three-level front seat heat.

Mazda provides a roomy rear seat too, but still probably best for just two riders. Three will fit in a pinch, and those rear seats will split and fold down. The test crossover also added a $1,395 Premium Package that included heated rear seats, and a heated steering wheel. Awesome! Also included is a head-up display that Mazda calls Active Driving Display, which recognizes road signs and also projects those on the windshield.

All that worked fine, but there was no way to adjust the brightness of the screen and it was too bright in some circumstances, making it a distraction. I’d opt not to add this display, although I’d want the heated wheel.

And while the Mazda dash is well laid out and features a nice 7-inch touchscreen, there’s no way around the horrible radio tuning system. This remains the worst of any vehicle I’ve driven in several years.

Mazda uses a big knob on the console to control the radio, navigation and a few other functions, and none are intuitive. Finding a station was hard and storing and retrieving it while driving is awkward at best. Many vehicles now have gone back to giving the driver six buttons on the center stack for easy radio channel storage. Mazda needs to too.

But otherwise this is a good-looking and solid interior. There’s a manual tilt/telescope steering wheel with the usual assortment of radio and cruise buttons on the hub. And overhead is a power sunroof and shade, plus HomeLink system on the rearview mirror and visors with extenders.

Standard here, and on all CX-5 models, is a power rear hatch and open-wide rear doors that make it easier to load a kid into a child-seat or just help us older folks crawl aboard.

Safety features are plentiful with blind-spot warning and rear cross-traffic alert and a rearview camera being standard on all trim levels.

Move up from the base Sport model to the Touring and you’ll go from cloth to heated Leatherette seats, with the driver getting 6-way power. Also on Touring the Mazda iActivesense suite of safety features is included. That adds adaptive cruise control, lane departure alert, automatic high beam headlights, rain-sensing wipers and smart braking. This braking system works up to 19 mph and detects if a front collision is imminent and applies the brakes to avoid an accident.

The Grand Touring model I tested delivers fully leather seats with a 10-speaker Bose sound system and navigation system too.

The different trim levels also allow you to choose either front-drive or AWD. I’d opt for the later in our climate. Sport starts at a modest $25,125 with front-drive and $26,425 for AWD. Remember all trims come with the same engine and transmission.

With the options mentioned earlier and a couple others, illuminated door sills, rear bumper guard and retractable cargo cover, the test vehicle ended up at $34,685. That’s just a touch below the average cost of a new car these days, so the Mazda remains a bargain.

Gas mileage also is a strong point with the Skyactiv-G engine that aims to produce more power with lower fuel usage and now offers a cylinder deactivation system, the first on a 4-cylinder engine. I got 27.3 mpg in a week’s drive, about evenly split between highway and city. The EPA rates the CX-5 at 24 mpg city and 30 highway.

Another engine is coming later this year, a diesel for the diesel lovers of the world. Diesels usually get somewhat better fuel economy, but the fuel itself costs more and we’re already approaching $3 a gallon now for regular gas.

From a driving, price and economy standpoint the Mazda CX-5 should be on anyone’s midsize crossover shopping list. You may be able to work the radio system easily, but that’s the only drawback that would give me a second thought. 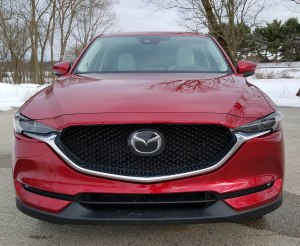