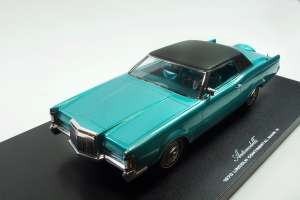 Is it fair to say the second time’s the charm?

Well, Automodello is rolling out its latest 1/24 scale model, a brilliant 1970 Lincoln Continental Mark III, which follows its 1971 version released several years back. That one was sharp, but I like this model even better.

It’s a little thing, but this 1970, another sealed body cast-resin model, just looks longer and leaner to me. With its simulated black vinyl top (standard on the 1:1 car) uncluttered by a sunroof hole, the Medium Aqua Metallic, a sort of metallic turquoise, looks great. It appears more elegant and regal, like the top-shelf 1970s luxury car it was.

For the record, only 150 of this model will be made, while an Homage edition in black also is available. Just 24 of those are planned. 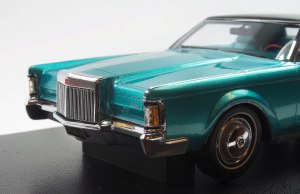 The Continental Mark III was launched mid-1968 to challenge Cadillac in the personal luxury market. The U.S. makes still weren’t too worried about European or Japanese imports at the time. The car rode on a modified Ford Thunderbird frame and was both smaller and sleeker than the Mark II. Under the hood a new 460-cu.in. V8 powered the 1970 Continental, kicking out an impressive 365 hp.

But this was a luxury car, and while performance mattered, the looks and interior finery and comfort may have mattered more, ultimately, when it came to sales. Yes, there was the “Continental” spare tire hump in the trunk lid, plus a giant cascading grille that some said looked like it was taken from a Rolls Royce.

Inside were leather “lounge” seats, while outside the 1970 model was the first to offer concealed windshield wipers. Continental also was first with electronic anti-lock braking. 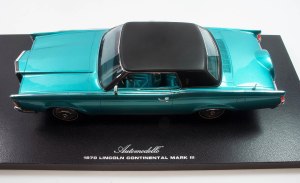 Automodello’s Lincoln is hand painted with automotive quality paint to give it an enduring finish and folks at Automodello tell us both the body and trim are polished by hand to give it its lustrous finish. People will notice this one!

But it’s the small details that impress the most. First, the Continental featured a chrome accent strip that ran the length of the car, front to rear fenders. That’s replicated here with a delicate looking chrome trim piece atop the fenders, plus shapely chrome window trim , including that rear window that’s inset into the vinyl top. 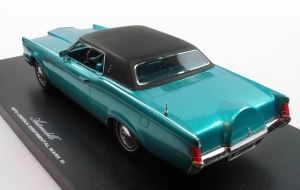 Mirrors and door handles also are chrome with key locks looking realistic and a new rear Continental script on the trunk lid.  Front and rear bumpers are all chrome too as is the trim around the tall fender running lights and turn signals along with the thin vertical taillights. Lenses are realistic looking front and rear too.

For this 1970 model the white sidewalls on the tires has been properly thinned as Automodello went through the whole model to update its various details to make sure all are to scale.

Inside, the gauges are highly detailed and made to show more depth so that the dash looks realistic. With the driver’s side window being down it’s easy to see that broad dash with five deep-set gauges and three-spoke wood-look steering wheel. The passenger-side windows are posed in the up position.

Seats look cushiony with the proper crossed stitching pattern on the lower cushions and the seats perfectly match the car’s exterior color.  We’re assured the carpeting is flocked to scale, but you’ll be hard-pressed to see that well without a seriously bright flashlight. 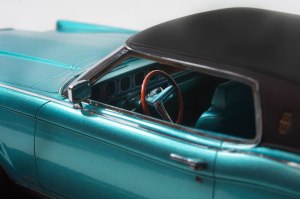 Ultimately this is another fine effort by Automodello, creating another rare domestic model from the 1970s.

You’ll want to order early for the black Homage edition, since quantities are so limited. It sells for $449.95, but  will be quite rare. The aqua model lists at $299.95. Previously the 1971 Continental model came in Red Moondust, Ginger Bronze and black, but those have  sold out.

So if you’re a 1970s Lincoln lover, this gives you a second chance at a true luxury liner.