VW Beetle Dune a cute bug that will scoot …

Volkswagen’s latest Beetle, the Dune edition, is colorful and simply cute as a … OK, cute as a Bug!

There, I’ve said it. But honestly I got a lot of looks in this metallic dark yellow mustard colored Beetle with its blacked out wheel wells and rear spoiler. It looked racy and fun, and it was.

VW has dropped a new 2.0-liter turbocharged 4-cylinder engine into its sporty little hatch and that improvement really amps up the fun factor. Horsepower is 174 and torque is 184 lb.-ft. That translates to low-end torque that helps the Dune get away from a stoplight with a bit of gusto. And that’s amped up further if you put the 6-speed automatic in Sport mode.

I did that a lot when hopping on the freeway, and the Beetle zipped up to highway speeds with ease.

I like the Dune’s wider and taller stance too, about a half inch higher than a standard model. The car’s stance gives it more stability than most small cars, and aids the Beetle’s handling. This feels sporty, like it would be a blast to take out on Road America for a few laps.

Ride, well, that’s fine on the highway or smooth roads, but crumbling Southeast Wisconsin side roads and neighborhood streets could sometimes create an abrupt ride. It didn’t help that the weather turned February cold for about half my drive, stiffening up the whole car.

The Beetle is front-drive and I did spin the tires on damp pavement a couple times, but the Dune also helps itself by going with 18-inch tires standard, that’s up from 16-inchers on the base model and 17-inchers on the SE. VW offers four Beetle trim levels, S, Coast, SE and Dune. 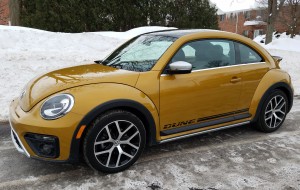 In addition to the larger tires, the Dune also comes with a backup camera, bi-Xenon headlights, blacked out wheel well trim and a snazzy Fender audio system that packs 400 watts and includes a subwoofer in the trunk. That sucks up a little cargo room, but still this is a hatch and the rear seats split and fold to increase cargo space. Beetle has a bit more than 15 cubic feet of hauling room in back.

Inside, the Dune looks as youthful and entertaining as outside. The dash carries over the exterior color as do the top of the door panels. That dark mustard yellow also is replicated in swatches of color above the instrument pod’s gauges. 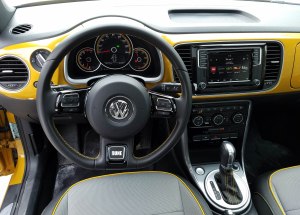 There’s also satin chrome trim for the door handles and on the doors, plus gloss black surrounding the radio touchscreen and the climate controls on the center stack below that. Best, to me were the seats, patterned gray cloth cushions with black leatherette trim and yellow piping and stitching. Plus a yellow streak on the leather shifter and stitching on the soft leather-trimmed steering wheel. Sharp!

You’ll also find push-button start and a big sunroof overhead, which darn near makes this as nice as a convertible. For the record, convertibles run about $5,000 more than the hatchback coupes. More on price in a minute!

In addition to the sunroof, Dune has three-level heated front seats and the steering wheel is a sporty D-shaped model to increase knee room and spiff up the car’s looks. The wheel is tilt/telescope too.

That rearview camera helps when backing out of parking lot spots and the visors overhead slide, so help keep sun and glare out of a driver’s eyes, another safety factor. Get this, VW also includes what it calls the Intelligent Crash Response System. The what?

The ICRS cuts off the fuel supply, unlocks the doors and turns on the safety flashers if you’re in an accident that causes the car’s airbags to deploy. Clever, and I don’t recall testing any other cars with this feature, no matter their price.

The dash is simple and easy to see and all buttons and knobs easy to reach. The fancy Fender audio system sounds great too.

Front seats are well-shaped, supportive and manually adjusted, including a pump handle on the driver’s seat to raise and lower it. I found it easy to achieve a driving position and the bucket seats have another advantage, a release handle on the back near the top. That allows you to simply flip the seat forward to allow kids to crawl in back. Headroom is limited in the rear seat, so no one over about 5-foot-5 will want to sit there. 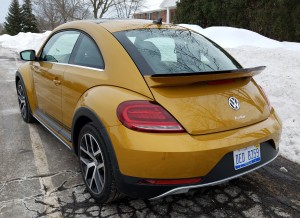 As much fun as the Beetle is to drive, there was one major flaw in the test car, a severe rattle in the car’s tail. Sounded like it was mostly from the passenger’s side, but was hard to pin down. Still, it rattled on every bump, large and small. Hope that’s not a standard feature.

Good gas mileage is though, and the turbo is happy drinking regular fuel. I got an impressive 32.5 miles per gallon in a week’s drive with about a 50-50 mix of highway and city. The EPA rates the Beetle at 26 mpg city and 34 mpg highway, which seems easily achieved.

Pricing also is on the Beetle’s side. The base S model starts at $21,070, including delivery. The Coast, which features a surfboard-inspired wood look dash, lists at $23,970, and the SE at $24,870. It comes with a blind-spot warning system. The top-end Dune, with spoiler, stripes on the side and that Fender audio system, lists at $27,640, including delivery. The test car’s special sandstone yellow metallic paint scheme costs $250 extra and put this model at $27,890.

That’s a pretty decent bargain compared with other wee hatchbacks. A couple main competitors are the Mini Cooper and Fiat 500. The Mini is equally fun to drive, but the VW has more horsepower than the base Mini and costs less. The Fiat’s main advantage is its lower price.

Hard not to like a VW Beetle, and fully loaded as this one was, and featuring its snazzy paint job, stereo and rear spoiler, this was a hoot to drive, and shouldn’t driving be fun? 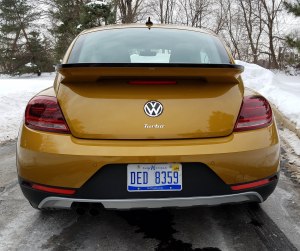 Misses: Ride can be abrupt at times and test car had severe rattle in tail-end. Rear seat headroom is limited.