If you can get beyond the new Honda Civic Si’s odd Transformer-ish rear-end you’ll find one of the finest, and most economical, sporty coupes on the market.

There’s a lot to like here, even if eye candy is not one of them.

The souped-up Si model has been missing from the Civic lineup for a couple years, so its return is welcomed by entry-level sporty car buyers whose options have been limited since the Si’s demise.

The Si links performance and economy unlike most other cars. It starts at a highly affordable $24,100 while boasting a turbocharged 1.5-liter I4 engine that creates a peppy 205 horsepower.

For a coupe weighing less than 3,000 lbs., that turbo will jack it up to highway speeds quite smartly. Firing up, or down, freeway entry ramps is fun and quick. There’s not much turbo lag with the Civic and its smooth shifting 6-speed manual allows the driver to put as much muscle into acceleration as needed, or desired. 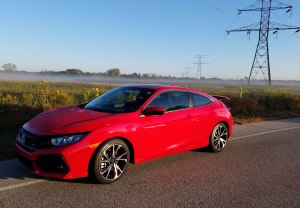 A Sport mode button may help that a little, although I didn’t feel it was needed or provided much extra boost.  Mainly the Sport mode firms up the steering wheel, or more to the point, makes steering effort much heavier than when that mode isn’t engaged. I found the normal driving mode just fine and steering response fairly precise without the added steering weight of Sport mode.

The Si is a Civic you can enjoy on meandering rural roads, say on a run to Holy Hill, and also on winding suburban subdivision streets. The car feels light and easy to drive. It corners well and its front-drive setup provides plenty of grip.

Ride is well-controlled, but on the firm side. So those with sensitive posteriors may prefer something smoother, with a less sporty suspension. But for the younger car buyers that Civic is aimed at, the sporty ride will most likely be just fine.

Certainly all Si owners will enjoy the car’s gas-sipping ways. I managed a phenomenal 39 miles per gallon in a week’s drive, and with plenty of time spent enjoying the car’s generous turbo-induced torque. The EPA rates this Civic at 28 mpg city and 38 mpg highway. The only downside is the Si’s preference for premium fuel. Still, you have power and mild gas consumption, so it’s likely worth the premium gas price tradeoff.

Inside, the bright red test car delivers a premium and sporty feel for its price. While the seats are gray and black cloth, they are well-shaped to give good thigh and lower back support. These aren’t Recaro race seats, but nearly as supportive and there’s a pump handle on the side to raise and lower the seat to fit the driver.

Plus the Si comes with heated front seats with three levels of heat. Add to that a sporty look with red stitching and both a leather gear shift knob and leather steering wheel, also with the red stitching, to liven up the car’s interior looks. 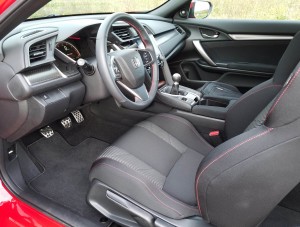 Civic’s dash is black with pewter knobs, gauge trim and vents and a gloss black center stack and good-sized nav/radio screen. There’s even a bit of fake carbon fiber trim on the dash.

The dash’s layout is simple and easy to see and understand and that nav/radio touchscreen is easy to use and figure out.  There’s a big open bin between the front seats with up to three cupholders inside and there’s an electric parking brake toggle near the console-mounted shifter – simple and handy!

Si comes with a tilt/telescope steering wheel with the usual assortment of buttons on the hub for radio, phone, cruise control and trip computer. Sadly that steering wheel is the usual round sort. A sporty car like the SI would be better served with a D-shaped wheel (flat bottom) to allow more leg and knee room since drivers have to be comfortable to use the clutch here.

A few other concerns include wide doors that can make entry and exit a little tough in scrunched parking spots where you sometimes can’t open the door all the way. Also the A-pillar is wide, sometimes limiting sight lines.

There are still other pluses though, including a push-button start, sun visors that slide, a backup camera and even a sunroof is standard. A sunroof is particularly rare in this price range. Which is?

Well, the Civic Si starts at $24,100 and adds an $875 delivery fee to bring it to $24,975. That’s right, just less than $25 grand. This was the coupe, but a sedan is also available, for the exact same price. The only option is $200 worth of summer performance tires. That’s a nice add-on if you don’t mind owning another set of tires to handle fall, winter and spring here in Wisconsin.

There are other more basic Civics starting even lower, but their I4 engine will pump out 31 less horsepower than the Si’s. Automatic transmissions also are available in those models, which include the hatchback, coupe and sedan.

An even racier Civic Type-R has just come into the lineup too, starting at $33,900. This is much more a racer with a 2.0-liter turbocharged I4 that creates a monster 306 horsepower. That’s monster for this size and weight car. Hope we can test one soon!

But the Si remains the top bargain among the sporty car set and the coupe still features a useful hatch in back with reasonable cargo space under the lid. Naturally the rear seats also fold down to increase cargo room.

I fudged a little on the eye-candy thing earlier, as the Civic still looks nice in profile and its standard wheels are a smoked chrome with fives spokes and look pretty darned racy!

And after all, with such a modest price and strong performance it’s easy to overlook the Si’s few shortcomings if you want a sporty small car that’s fun to drive.