Volkswagen brings a little fun to the small wagon market, which is a niche of a niche these days, but certainly compares well with small crossovers.

But instead of a tall boxy AWD vehicle, the Golf Alltrack is a decidedly leaner machine that looks downright sporty compared to a crossover. In fact, the Golf Alltrack is an offshoot of the Golf SportWagon, same basic vehicle, but raised a seemingly minor 0.6 inches for a 6.9-inch ground clearance and uses VW’s fine 4Motion system for grip.

The silver test wagon, which VW aims to compete with Subaru’s Outback and Crosstrek, was the mid-level SE model. The S with manual transmission starts at $26,670, while the test unit listed at $30,530 with no options and an $895 delivery charge.

What you get is a dandy handling, light and quick wagon that will haul quite a lot. Like most crossovers and such, it could go on minor-league muddy, rutty, non-paved surfaces, but really is aimed at on-road use. That’s thanks to the 4Motion system that runs the car at 90% front-wheel drive and 10% of the power in back most of the time. Once slippage is sensed, it splits the power 50/50.

So on slick or slushy streets the Alltrack will give you more driving security, more sure-footedness. I had it one day when streets were wet and its grip was satisfying.

But really, its winning point is its light easy handling. The car feels agile, which most crossovers do not. Point the car into a tight corner and accelerate through it and the feel is sporty, the turn’s apex clipped and with virtually no body roll. This adds some fun to the daily commute.

Power is good too from a 1.8-liter direct-injected 4-cylinder with a turbo. It generates 170 horsepower and 199 lb.-ft. of torque. There’s a slight lag, but generally quick acceleration and solid power.

Press a button to engage Sport mode and the steering effort firms just a bit and shifting becomes slightly more aggressive. The 6-speed automatic tranny also can be shifted manually by tapping the console-mounted gearshift lever or using shift paddles behind the steering wheel. That way, you control the shift points. 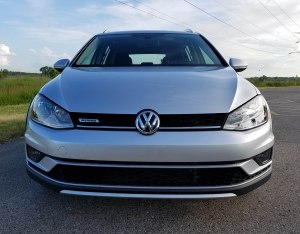 In addition to the Sport mode the Golf includes Normal, Custom and Off-Road settings. The off-road adjusts the AWD, throttle and traction systems for uneven roads. The mode adjustments are controlled via a console button that is right next to the keyless start button. Be careful to not mistake one for the other.

The major compromise with VW’s Alltrack is a stiffer ride than in many small utes and crossovers. Expansion joints are felt, but in the VW’s defense, the ride feels more controlled with less shock rebound than in most crossovers, a more precise feel. That’s something I expect from the German makes. Sadly there was some suspension noise in the test car, some groaning over bumps taken at low speeds.

Braking is fine from four-wheel discs and traction and stability control are standard.

Inside, I liked the VW’s interior design and the black perforated leatherette seats were well-formed and supportive, plus included three-level heat for the front seats. These were manual seats, but easily positioned and included a pump handle on the side to raise and lower the driver’s seat to a comfortable level.

Dash design is simple with everything easy to see and adjust. The touchscreen is moderately sized but easily read and includes a rearview camera to aid the driver when backing the wagon. 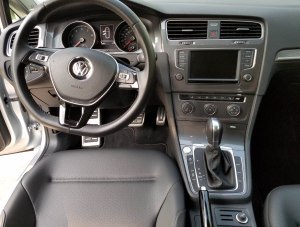 It was easy to figure out the radio controls and adjust channels and the climate controls consist of three simple knobs. Wunderbar! VW’s steering wheel is a manual tilt/telescope model with the usual radio, cruise and computer controls on its hub, but Volkswagen ups the sportiness factor with a flat-bottomed steering wheel.

The radio sounds good and the car includes Fender speakers in the A-pillars and a Fender premium audio system.

Overhead the Alltrack features a panoramic sunroof with big single sliding shade that easily blocks the sun on bright days. Passengers were impressed with its size, especially considering the car’s modest cost. Also overhead, the VW’s visors slide to block side sun.

Oddly, one key safety feature is not standard, a blind-spot warning system. Its absence was a surprise.

The interior feels roomy and I carried up to four adults in the Golf and everyone found it had plenty of head and legroom. Being a wagon there’s a hatch in back, with wiper, and the rear seats split and fold flat to boost cargo room, which is generous. With rear seats in place it measures 30.4 cubic feet and with seats down it balloons to 66.5 cubic feet.

I also like the roof rails, which are standard, and the black plastic cladding that goes over the wheels and along the car’s base. That will protect it from scratches and dings and frankly gives the car a more appealing appearance.

Gas mileage also was solid for an all-wheel-drive wagon. I got 26.9 mpg in a relatively even split between city and highway. The EPA rates the Golf Alltrack at 22 mpg city and 30 mpg highway.

Overall the tested Golf Alltrack SE checked in at $31,350, an extremely competitive price in the small crossover segment. Moving up to the top-level SEL model pushes the price to $33,710 with delivery.

Some may be larger and have a better ride, but there aren’t many crossovers or wagons that are more fun to drive.