Lexus GS F is a NASCAR wannabe in street clothes … 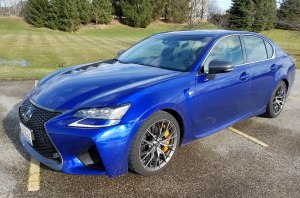 Unless your name is Hellcat or you sport some semblance of racing stripes and a hood scoop you’re not supposed to gurgle and pop with power if you’re simply a luxury sport sedan.

Ah, but the Lexus GS is everything from a fine luxury sedan to a NASCAR wannabe, a racer in street clothes.

A base GS 200t, you see, is equipped with a 241-horse 2.0-liter I4 that’s turbocharged. Oh that’s nice and sporty in its own way and a potential Lexus owner that’s pushing the limits of his home equity loan to snag one will shell out roughly $47 grand and change.

But there are so many other choices, two more engines and a hybrid model too. So say sayonara to that base model if you want to light up the tires and thumb your nose at German luxury sedans, or domestic muscle too. The tested GS F, or F Sport model is the sharp end of the GS line and it’ll flat out fly.

No, it’s not a HEMI, but the Lexus has a sexy sounding V8 that’ll nearly put the roughly 4,000-pound sedan into orbit. The numbers are this, 5.0-liter V8 creating 467 horsepower and 389 lb.-ft. of torque. Don’t go pooh-poohing that because your Vette or Hellcat has more ponies. With its modest weight and a dandy drive mode system that allows you to go from Normal to Sport or Sport+, you’ll suddenly find the GS turning surly. 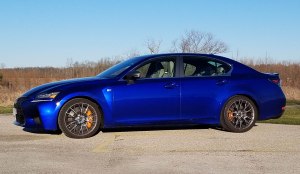 I was expecting good power, but punched the console’s drive mode button just as I was pulling onto the freeway and the rear-drive GS twitched its tail and rocketed up to, er, well, more than the standard highway speed before I was halfway down the entry ramp. Haven’t had this much fun since my last Vette drive, and that’s been a while.

We shouldn’t be surprised, I guess. The GS has adopted the Lexus oversized grille and aggressive looks, so it follows that their engineers would drop a massive V8 under the hood. The best part, for youngsters who have been thinking a V6 or turbo I4 is hot stuff, is the sound the V8 makes. Throaty in Normal mode, it wails as it winds to highway speeds with a demonic burst of power.

OK, so it rocks. But the handling is firm and sporty in all modes, just firmer and more responsive in Sport and Sport+. There’s Adaptive Variable Suspension too that will firm up the ride, if need be, but it’s soooo deliciously refined as it is, I found little need for adjustment. The car eats up bumps while remaining in touch with the road, giving the driver good feedback as you slip through fast turns with moderate wheel effort.

There’s an aluminum suspension underneath, which helps keep weight down, and furnishes that excellent ride. Braking is superb too with Brembo ventilated discs and the test car added orange brake calipers for $300. Those stood out behind the alloy 19-inch wheels. The F model upgrades from the standard 18-inch tires and wheels.

This 8-speed Sport automatic also is slick, quickly and nearly imperceptibly changing gears. There are also paddle shifters behind the steering wheel if you fancy yourself an F1 driver and want to manually select each gear. I like manual gearshifts, but this isn’t nearly as much fun.

The test GS was a beautiful sparkling Ultrasonic Blue Mica, a $595 upcharge, but worth it. A lot of office colleagues noticed this one in the parking lot. It stands out in the gray sedan corral you find in most lots.

Inside, the GS bathes the dash in black suede with blue stitching that carries over to the doors, console and center armrest. It feels and looks great. There’s carbon fiber-look trim on the dash, doors and console too. Seats are perforated gray leather with an “F” monogrammed on the headrests.

There’s plenty of room inside for four adults, but the F model puts race car-like snug seats up front with a 10-way power sport seat for the driver and 8-way for the passenger. Both get three memory settings too. These seats are super supportive and comfortable, but snug. Some folks may not like that hug over a long drive.

The seats are heated and cooled too, with an automatic setting so you don’t need to fiddle with buttons as you drive. Controls are at the front of the console. Oddly, Lexus does not include a heated wheel on the racy upscale model though, nor a D-shaped steering wheel. Many sporty coupes and sedans go with the flat-bottomed wheel because it looks racy and also gives drivers a tad more legroom when exiting the car. However, the driver’s seat here powers back when the ignition is turned off. 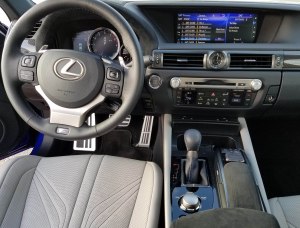 Overhead is a power sunroof and visors that slide. There’s an SOS button and HomeLink buttons too.

F Sport adds a power trunk lid, plus storage is sizeable in back. Other upgrades include variable gear ratio steering, bigger brakes and a 12.3-inch navigation screen. It looks great, but as with other Lexus models, uses the awkward console-mounted mouse to control all onscreen functions. A touchscreen would be a better option.

One thing that doesn’t stand out here, and again should not be a surprise, is gas mileage. I got 20.2 mpg in a mix of city and highway driving. That’s right in the middle of the EPA estimates of 16 mpg city and 24 mpg highway.

Now on to pricing. The range for the GS is phenomenal, starting at that $47 grand and avalanching all the way to the test car’s $83,940 starting price. Adding fancier wheels, a heads up display, upgraded paint and painted calipers put this one at $87,310, including a $975 delivery fee.

I know you’re gasping and holding your mouth right now, but that’s certainly in line with other hot rod sedans. Consider its competitors as the BMW 5 Series, Mercedes-Benz E Class and Cadillac CTS-V, among others. 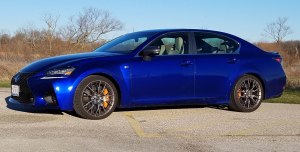 So what are you waiting for, sell the house and go buy a sexy, street-legal racer that sounds like it’ll smoke about anything, and mostly will!