A beautiful Buick ambulance in 1/18 scale …

Every kid of the 1950s and 1960s remembers the extremely long brightly colored ambulances of the day, either from seeing them as they ran our city’s streets with lights flashing and sirens blaring, or from TV shows of the day.

Cadillac ambulances with their big tailfins were popular to be sure. We all remember the Ghostbusters’ Ecto-1. But many ambulances were based on Buicks too, in fact from the 1930s forward Buicks were the basis for both ambulances and hearses.

BoS-Models, also known as Best of Show, has just launched a beautiful cream and crimson 1960 Buick ambulance in 1/18 scale and it’s a stunner. This diecast resin ambulance is more than 13 inches long, finely finished and reflects a custom ambulance created by The Flxible Co. in Loudonville, Ohio.

This long-wheelbase Buick built by Flxible (the E was dropped to create a registered trademark) was the Premier model and listed at the time for $8,615.

Flxible made ambulances, hearses and buses, but started as Flexible Sidecar Co., making motorcycle sidecars. The name came from a patented flexible mounting that allowed sidecars to lean in corners with the motorcycle, making them safer and easier to control. Flxible closed in 1996 after 83 years in business.

In the 1960s the firm used primarily Buicks to create their ambulances and hearses and had a smaller model, the Flxette, that rode on the 126-inch wheelbase of a Buick Electra. The premier was more than 27 inches longer.

The 1960 Buick Electra had a concave grille, with side-by-side quad headlights, and the first tri-shield Buick logo on its grille. Plus the front fenders sported four VentiPorts, the chrome portholes of a sort that had started in 1949 Buicks and had returned for 1960. All of that is perfectly captured in the resin BoS model. 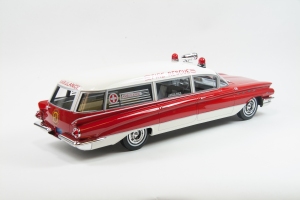 This Buick’s front and rear bumpers, and naturally that toothy grille, are all chrome as are the door handles, mirror, and taillight surrounds. The roof sports two standard red bubblegum lights trimmed in chrome and the center-mounted red light and siren to get folks attention. The thin white-sidewall tires also feature full chrome hubcaps and they’re pretty darned fancy looking for an ambulance, but were standard fare in 1960.

Buick is spelled out in photo-etch on the hood’s nose and BoS puts red Fire-Rescue and Ambulance decals on the roof. A fire and rescue emblem is emblazoned on the big wagon’s back door and Ambulance markings with a cross are printed on the rear side windows. The model also has a no. 138 decal on each side in front of the doors to represent the car’s fleet marking. Flxible script logos are on both front fenders too.

This is a sealed body model, so no doors open, nor the hood. All windows are posed up too so the light and dark gray interior will stay dust free if you display this outside a case. You’ll need a larger than usual acrylic case if you want to enclose it due to the car’s length.

Inside there’s the new, at the time, Buick two-spoke steering wheel with horn buttons instead of the usual chrome horn ring. Gauges are raised on a pod atop the dash, very modern for the early 1960s, while the shift lever is still on the column.

Naturally the ambulance’s tail is most interest and there is a gurney there with yellow mattress and white pillow, plus two jump seats to accommodate an attendant or two. There is no other medical equipment in the rear and I really wish the tail’s big door opened to give a better view inside.

Still, this is a beautiful long-wheelbase ambulance, not your typical subject matter for a 1/18 scale model!