Cadillac has mastered the styling, now it needs to work on the details.

The new Cadillac XT5 crossover continues Cadillac’s sharp chiseled styling with tall taillights and noteworthy nose and headlight stylings. Its interior is luxurious and attractive in a way most German makes have yet to figure out because of their love for black leather.

But the XT5’s seats are way too snug in the hip and the ride too firm for our crumbling Wisconsin roads that are cracked by time, winter and a lack of willingness to pay for improving them. Additionally its CUE audio screen is improved, but still not the easiest to master while driving.

The XT5, which replaces the SRX and rides on what should be a smoothing 112.5-inch wheelbase delivers a firm ride that turns too sharp and bumpy on cracked streets and highways.

Yet like other Cadillac’s and GM products, the XT5 delivers ample power with a new 3.6-liter direct-injected V6 with variable valve timing. It’s rated at 310 horsepower and 271 ft.-lbs. of torque, so it’ll scoot when required to. That happens best when in Sport mode which holds gears longer in the 8-speed automatic. In normal mode acceleration is moderate.

Sport also firms the ride, which is unneeded, and slightly stiffens the steering. However, handling is good even in normal mode making the XT5 fun to drive on winding roads. My test vehicle made the annual trek to Holy Hill to see fall colors and it was a delight, particularly with its panoramic sunroof allowing rear seat occupants to stare up at the colorful foliage.

Cadillac’s crossover corners well and is easy to control, with just slight body lean. Overall the XT5 feels fairly nimble, and in fact is about 300 lbs. lighter than the SRX it replaces.

The Platinum version that I tested also featured all-wheel-drive to give it better footing in the wet and snow. That adds to driver confidence once bad weather sets in. AWD also adds some weight, but it was not much of a factor in driving and didn’t hurt the XT5’s mpg.

Most folks will be impressed with how quiet this interior is. Cadillac has done a stellar job of quieting the cockpit and cabin. It’s roomy enough for five adults too and the rear seat will slide a few inches to increase rear legroom when needed.

There’s a power hatch and this one included a compact spare tire and cargo net for another $350. In addition there was a collapsible cargo organizer behind the rear seat. That’s not listed as standard equipment, but a $140 dealer-added option. However, it was not on the pricing that came with the test crossover.

Interior trim and accents are plush and gorgeous. Mine had soft tan leather seats with suede on the dash facing, plus open pore wood trim and satin chrome trim around gauges and the nav/radio screen. The lower dash and lower doors, plus console sides, armrest and steering wheel were dark brown giving the XT5 a rich looking interior.

The XT5 came with a heated steering wheel and heated and cooled front seats too, plus that giant sunroof overhead, with power of course. Even the thick sun visors slid to block side sun.

Seats are powered and include two memory setting for the driver and a power lumbar. However, Cadillac creates an extremely snug seat bottom that clutches at your hips. Large drivers will not like that. I’m small and it was tight for me. Seat backs are well contoured though and rear-seat riders praised head and legroom, plus seat comfort.

Cadillac’s dash is cleanly styled. The nav/radio screen could be a little larger, but I could read everything on its face. Cadillac still favors its CUE infotainment system and I must admit, it has been refined to make it easier to use. It’s less touchy now. But CUE is still not the easiest electronics system to use while driving.

Also, the push buttons for heating and cooling the seats were hard to activate, requiring a decidedly firm press to click on and adjust. First World problem indeed, but other makes’ controls are easier to use.

There also are the usual techno goodies too, a rearview camera, lane departure, blind-spot warning, even a head-up display. Sensors also warn if you’re about to smack a curb, other car while parking, or even a vehicle slowed in front of you as you drive. But it takes a unique and welcomed approach. The system vibrates your seat to alert you instead of distracting with a piercing alarm or flashing lights as most do. In this, Cadillac excels.

A few other small things. One, the rearview mirror is tiny compared to most. Yet the steering wheel is a power tilt/telescope model, there are cornering lamps, and Apple Carplayer is available for smart phones. OnStar service also is standard for a year.

Finally, the cup holders feature a sliding cover to spiff up interior appearances if you’re not sucking down a designer coffee.

Pricing is mostly what you’d expect on a Caddy. While a base front-drive model starts at a reasonable $39,990, the tested top-level Platinum model lists at a hefty $62,500 with $995 delivery fee. It comes with the high-level leather interior and 20-inch tires and wheels. The test crossover listed at $63,845. 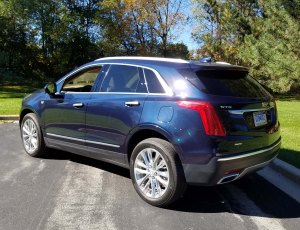 Made in: Spring Hill, Tenn.