I can’t explain it, but the youngsters these days are going crazy over matte finishes on cars, motorcycles, snowmobiles and ATVs. It is different, but looks like primer paint to me.

Still, Bburago gives them what they want with its new matte, or flat, black LaFerrari in 1:18 scale. The model is tucked inside a Styrofoam shell inside a racy red box with foil-like silver lettering on it. This is part of Bburago’s move to more upscale models, somewhat beyond the toy market, but still high in value.

Speed and sexy looks sum up Ferrari’s essence. LaFerrari is the latest mid-engine package that plays off that iconic theme.

LaFerrari was launched at the 2013 Geneva Auto Show and is a hybrid super car with a 6.3-liter V12 and a 161-hp electric motor. This is the first production car with the hybrid HY-KERS, a system that stores and delivers electricity for added power. KERS was developed in F1 racing. Combined, the car has 949 horsepower and 663 ft.-lbs. of torque.

Top speed at least 217 mph and LaFerrari will do 0-60 mph in less than 3 seconds. Not many are being made, naturally. Just 499 have been built and each costs more than $1 million. The Bburago is a much better deal!

Bburago delivers a beautifully sculpted version of LaFerrari and one that features opening doors, hood and engine cover. The matte black finish is smooth and does not show fingerprints quickly, so that’s a plus. 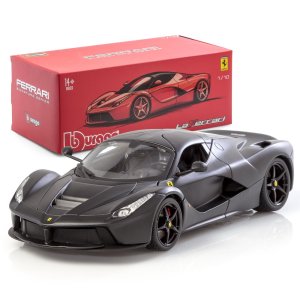 The interior and engine bay details prove most impressive for this value-oriented model. The scissor-like doors that open up and forward feature a large matte black hinge that allows them to swing clear and give you a good view of the black interior.

Seats are well sculpted and feature separate shoulder harnesses. The squarish black steering wheel features Ferrari’s trademark black stallion on the hub, along with several buttons and the console and dash all look good with various buttons and gauges. Floor pedals are silver and appear to look like the original’s chrome-plated versions.

The entire rear fender and window bonnet flip open and are easily posed in that position without any support, however there are plastic struts you can raise to make it appear they are holding the engine cover.

In any case, with the bonnet up you see the top of Ferrari’s massive V12 with headers properly labeled. And there are orange cables that wind through the engine compartment for the F1-derived HY-KERS hybrid drivetrain that features an electric motor. There’s a slight carbon-fiber pattern to the inner fender covers too and you can see the giant round red taillights in their entirety.

Closed, the bonnet’s rear window still reveals the top of the Ferrari engine and some of the orange cabling. Always cool when you can see a car’s engine through its rear window.

The well-shaped and vented hood opens too, but there’s not much to see other than more fake carbon fiber. I feel Bburago could have left the nose sealed and saved some effort.

Head and taillights look good and there are yellow and black Ferrari logos on the nose and doors. In back is a chrome stallion and chrome Ferrari nameplate, plus LaFerrari where a license would go. Diffusers and quad tailpipes also sexy-up the rear-end.

Tires are treaded, but not branded and the five-spoke sport wheels are black with yellow Ferrari logos on the hubs. Big silver vented disc brakes and red brake calipers are visible through the wheels and include a Ferrari decal on each caliper. The doors also each have a tiny amber light/reflector just behind the front wheels and big matte black mirrors extend from each door on long stalks. Gas filler caps are simply body indentations on each side of the rear bonnet.

Now that Bburago has Ferrari back in the fold we can expect a lot more moderately priced 1:18 and 1:43 scale models. Ferrari had been away for about 14 years. But Bburago has upped its game with the new Ferrari lineup, and collectors are the beneficiaries. These are high-value die-cast at a modest price.