By 1971 Al Unser was no longer just Bobby Unser’s younger brother, he was a 2-time Indianapolis 500 winner, while Bobby had won just once.

The decidedly quieter, more humble Al had wisely hooked up with Parnelli Jones’ team and had the dominant PJ Colt chassis and a Ford V8 engine behind him. That helped Al lead 190 of the 200 laps after winning the pole position as fastest qualifier in 1970. He would not only win Indy that and the following year, but the Indy Car National Championship in 1970. 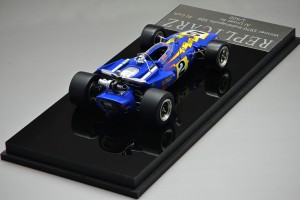 Unser and the team also were lucky to have the colorful sponsorship of Johnny Lightning, a then new die-cast toy car maker that was challenging the likes of Hot Wheels and Matchbox. The result was a colorful bright blue racer with yellow lightning bolts in 1970 and a darker blue version with those same electric bolts for 1971. Every kid in America knew this car and its color scheme.

Al Unser came into the 1970 Indy 500 with just four Indy 500 starts under his belt, including a second place finish in 1967. But he missed the 1969 race due to a freak bike accident that left him with a broken leg.

But driving for the team headed by Jones, who had won Indy in 1963 and nearly in 1967 in the famous STP Turbine, Unser nearly unstoppable. He won five races the previous USAC season, three on paved tracks and two on dirt. In 1970 when he was champion, Unser won 10 races, five each on dirt and paved tracks. The following two years his teammate Joe Leonard won the championships, showing how strong the Vel’s Parnelli Jones Race Team was at the time.

Both Replicarz models are beautifully executed and while many casual observers will assume these are the same cars in different color schemes, they are not.

Close inspection shows the bright blue 1970 model with a wider left side pod that protected the fuel tanks, while the 1971 model is slim with each side being the same dimension.

The 1971 model’s nose also has small winglets on the side and yellow front suspension springs. The Johnny Lightning decals, while similar, also vary some and the 1971 model is No. 1, reflecting Unser’s championship the previous year, vs. the No. 2 on the 1970 car. Various sponsor decals, which were rapidly growing in numbers by 1970, also vary from year to year. 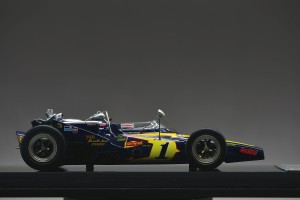 Spectacular detail at this price and size include the delicate well-executed front and rear suspensions with their slim supports and springs. There’s a fuel insert coupler on the left side of each, flat wings that run next to the engine compartment, silver duct work to feed the turbo and the silver and black turbo itself at the rear of the engine cowl. The car’s tall driver’s mirror also sits atop a unique tripod just to the right of the cockpit, which includes a black seat and steering wheel.

Al Unser’s name, along with that of Chief Mechanic George Bignotti, are printed on the cars’ sides. And the racers ride on brushed-metal look wheels with knock-off central spinners and Firestone branded black slicks to give the cars a realistic race-morning look.

Replicarz’s 1:18 Indy Cars are special, but for folks with less display space, or smaller budgets, the new lineup of 1:43 scale cars are a perfect fit to complete an Indy Car collection. In a surprise move, Replicarz also issued Leonard’s yellow national championship car in 1:43 scale recently in very limited quantities.