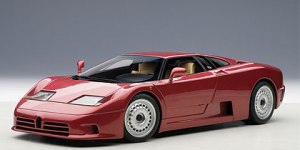 Bugatti’s existence is best characterized by a rollercoaster. Its ups have been spectacular, and its downs, well, also were outs.

But in September of 1991 its new owner introduced the new mid-engine EB110 GT, the 110 signifying the 110th anniversary of company founder Ettore Bugatti’s birth. The EB110 was a supercar ahead of its times in several ways. Sadly, sales results weren’t one of its successes.

Now Autoart has creates a 1:18 version of the 110 GT with its usual eye to detail, and in four colors, blue, white, silver and the dark red of our sample.

Bugatti, an Italian who built his successful company in France, created beautiful high-performance cars for years, its heyday being the 1920 and 30s. But the company floundered after World War II and ceased production in 1963, only to be revived in 1986 by Romano Artiolli. When it appeared in 1991, the 110 GT was Bugatti’s first car in roughly 40 years and it was spectacular.

The supercar featured the low lean look that Ferrari and Lamborghini had been taking to the bank for years, but added scissor-style doors and a 3.6-liter quad-turbo V12 and all-wheel-drive to make it both racy looking and giving it top-shelf performance.

Top speed was listed at 213 mph and the car featured a carbon fiber chassis made by an aircraft manufacturer.

But the EB110 was only made from 1991 through 1994 before money woes ended this chapter for Bugatti. Just 139, a number that seems somewhat in question if you cruise a lot of websites, of the EB110s were made. Reportedly just 95 of the GT models were built and former Formula 1 champion Michael Schumacher owned a yellow one.

By 1995 Bugatti was in bankruptcy, ultimately to be bought by Volkswagen. Its Veyron model was a hit with the supercar crowd and its many iterations continue to keep the Bugatti name, and flair for design, alive.

Blue is the traditional Bugatti color, so it’s nice that Autoart offers some other variations here. The dark red review car is sharp and the paint job flawless. Autoart says there are 116 free-hand sprays to achieve this deep, smooth finish. 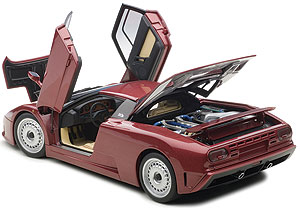 Like other Autoart cars of this scale, everything is functional, meaning hood, hatch and scissor doors open. There’s also a wide thin spoiler or wing that can be raised slightly at the car’s rear.

Detail is fine and the car feels robust. Of the impressive 346 parts, 111 are metal, with most of the plastic ones used in the interior and in the fine engine detail. Like most supercars you can see the magnificent V12 engine through the rear window and the headers include the Bugatti name. I like the blue trim on the silver engine and blue hose fittings along with the metal foil-look wrap that has become more common among high-performance engine bays.

Inside, the tan and cream interior looks upscale and sporty, and the shading difference between the two colors is subtle. The dash though is black, as is the steering wheel. Stickers detail the dash gauges and mimic the wood-look dash facing. A big console with stubby gearshift knob runs between the two seats.

Exterior detail includes beautifully crafted head and taillights, a Bugatti badge on the nose, a large black plastic windshield wiper and arm, large side mirrors with reflective faces, tiny side light bubbles over the front wheel wells, nicely detailed wheels and dual chrome exhausts. Photo-etched grilles grace all air inlets and outlets and the cool scissor doors feature metal hinges. I wish the tires were branded, but that’s a minor point and no doubt would push the model’s price up to pay for the licensing.

Overall an exotic looking early supercar, the Bugatti looks great in profile and creates a stunning display model with the doors swung up and the engine bay exposed. If you’re a supercar fan, the EG110 GT is deserving of a spot in your collection.