Muscular Stingray convertible opens up more ways to have fun

I had to laugh at the timing. After a beautiful spring week, a “velocity yellow” Corvette Stingray convertible showed up for a test drive as snow was flying and the temperature had dropped to the mid-30s, ah Spring in Wisconsin.

But by the weekend, the sun and 60+ degrees had returned, allowing me to drop the yellow screamer’s black cloth top, at least for a while. It only takes 20 seconds to power the top down, and you don’t even have to loosen any latches at the roofline.

I’d driven the new seventh generation Corvette coupe last fall, but just briefly. This time I was allowed a week in the bullet-like street racer with its long pointed nose and menacing Star Wars looking tail with four tailpipes bunched together and burbling away happily. Folks always notice a Vette, and slathered in near neon yellow, this one screamed for attention. I was hoping our state troopers would prove color blind.

Funny thing, everyone wants a ride when you are testing a Vette. I had new friends at the office, gas station, custard stand, you name it. And why not?

The 2014 Vette is not only a looker, it’s a racer, a muscular heart-throb of a car with a massive 6.2-liter direct-injected V8 that features variable valve timing and boasts 29 mpg EPA rating on the highway. And this with 450 horses no less. I’m betting it would get darned close to that if a driver could resist tromping its gas pedal so hard. But avoiding that is like eating just one potato chip, a challenge.

I managed 18.5 mpg in 60% city driving, but admit to mashing the gas pedal when getting on the freeway. It was fun to watch the dash’s projector-style speedometer register nearly triple digits. Heck, Chevy says this will top out at 190 mph and do 0-60 in less than 4 seconds. Both are believable, but sadly there are few places to legally check such facts.

That may be the biggest problem with such high-performance cars, along with traction. Despite traction and stability control, I could get the car’s nearly slick Michelin ZR-rated run-flat tires to squirm, even on dry pavement. These are meant for high-speed runs on smooth asphalt and likely wouldn’t last long on our roads that still are covered with winter grit and salt remnants. Tail-wagging was common and that road grit made it sound like someone was sandblasting the wheel wells at times along side streets.

Once on a smoother blacktop highway, like Hwy. 83 north of Chenequa, the Vette ripped around S-curves like the racer it is. I could put its tires on the inside white line in a turn and keep it there, no matter the car’s speed. Steering wheel feedback is good, but heavy, which you’d expect. Yet Corvette’s speed-sensing power steering makes the car easy to control.

Ride is firm, but there’s Magnetic Ride Control, a $1,795 option, that allows you to dial in the ride via a console-mounted dial. There are Weather (for slick roads), Eco, Touring, Sport and Track modes, with Track firming up ride the most and yes, you could feel the difference. It was hard to tell much dampening difference between Touring and Sport, at least on the chattery roads I frequent. But you’re not buying a Corvette if you have a sensitive tail bone. Note too that the low-profile performance tires (19-inch front and 20-inch rear) deliver a harsher ride than standard radials.

I was happy with the Corvette’s 7-speed Tremec transmission too. It’s easy to shift and so well geared and suited to the engine that I never stalled the car in first gear, despite a heavy clutch. In past Vettes I’ll admit to killing the engine a few times in first gear.

Braking from giant performance vented discs is excellent, sometimes getting passengers to comment on how quickly and resolutely the Corvette seemed to stop. 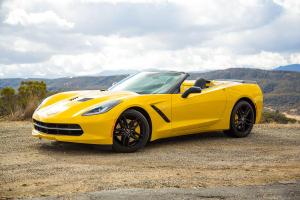 Naturally, this being a drop-top, the convertible’s function is a key element of this model’s allure.

As I said, putting the roof down is easy, just hold down a button to the left of the steering wheel and the roof unlatches itself and powers down and is folded under a solid bright yellow tonneau cover. With the top down there is precious little wind in the cockpit, so even in 40- to 50-degree temps the interior felt pretty cozy.

Part of that cozy feeling comes from its performance-oriented seats, which are well contoured to hold driver and passenger in place, if perchance, you’re driving at speed. I, and several passengers, found the butt pocket a bit narrow, but mostly folks agreed these seats are comfortable, once you got planted in them. I know I’m skewing old these days, but lowering into a Vette is still a challenge for all but the most limber drivers and passengers.

Mostly you step down and turn sideways and drop, then use the steering wheel, or console handle for passengers, to pull yourself out. One challenge for short drivers is the small clearance between the door frame and seat base. I found myself powering the seat back several inches and powering up the tilt/telescope steering wheel all the way for easier exit. I would like to see a driver’s seat that powers back and a wheel that powers up automatically once the ignition is off. Many luxury models offer this now.

On the plus side, this Corvette’s interior is better appointed than previous models. The test car featured a black leather interior with gray stitching on the dash and doors along with pewter looking trim on the doors, by the gauges, steering wheel hub and console. The steering wheel features a thick leather wrap with gray stitching. Seats are leather trimmed with suede inserts.

What pray tell is extra when you’re paying $60 grand up front? Well, this one added a head-up display that projects the speed and your gear choice onto the lower windshield. That, along with heated and cooled seats, heated outside mirrors and power memory seats, a Bose audio system with 10 speakers and MyLink navigation system are part of an $8,005 option package.

This also added a multi-mode performance exhaust, the bright yellow paint job and brake calipers, carbon flash painted spoiler and outside mirrors and a carbon fiber dash trim as options. Total for all options was $14,570.

Standard on the car is a big 8-inch navigation/radio screen, which also is helpful because that’s where the back-up camera presents its view. There are big buttons under the screen, making it easy to use while you’re zipping along the freeway at light speed and the steering wheel is a power tilt/telescope number. Remote top-down control for the roof, power seats, dual zone climate control, satellite radio and OnStar also are standard, along with a carbon fiber hood to keep weight down. In fact the Corvette, despite its mammoth engine and bevy of tech features weighs in at just 3,362 lbs.

Oddly there’s no blind-spot warning system, something you could really use because of the massive blind spot created by the car’s large rear roof panels. There’s also a fair amount of tire noise and some wind noise that creeps in at the rear part of the roof. You won’t be carrying too much luggage with you either in the wide, but narrow trunk. GM says there’s 10.0 cubic feet of space, so enough for a couple overnight bags.

Folks who prefer solid top can opt for the coupe 1LT version that starts at $53,995. Its mechanicals are all the same as the convertible. A higher-horse model, the Z06, also will be available later this year as a 2015, in both couple and convertible. Its supercharged V8 will create 625 horses and Chevy is calling the Z06 a supercar. So far no word on price, but buying a lottery ticket now may be advisable.