With a name that promises size as well as exclusivity, the Nissan Armada Platinum Reserve delivers on both while coming in at what has become a mid-luxury large SUV price.

The Armada, made in Mississippi along with Nissan’s luxury make Infiniti Q56, is a beastly big vehicle with a softer luxury side. Touting the Platinum Reserve package that sounds like a wine rating assures a buyer that he or she is getting, well, something pretty darned special.

And so they are.

First, Armada looks like the biggest full-size ute on the highway. Its boxy styling and tall stance give it a formidable road presence. But it’s an optical illusion. The Chevrolet Suburban/GMC Denali XL, are much larger, nearly 15 inches longer stem to stern. In reality Armada slots in between Suburban/Denali and Chevy Tahoe/GMC Yukon, but weighs 21 lbs. more than Suburban and 147 lbs. more than Tahoe.

Armada, while shorter than Suburban, is 5 inches longer than Tahoe/Yukon. Height and width are similar for all these large trucks. Tahoe/Yukon has the best power to weight ratio at 17.8, but Armada can tow the biggest load at 9,000 lbs. Suburban is just behind at 8,000 lbs.

Be that as it may, all these are large, and Armada loses the gas mileage battle, being powered by a massive 5.6-liter V8 that creates 317 horsepower, same as the Infiniti Q56. I managed only 14 mpg in a week’s driving, while I had eeked out 15.5 mpg in the 400-horse Infiniti a couple years back. The EPA rates the Nissan at just 12 mpg city and 18 mpg highway. Ironically there is no gas guzzler tax on SUVs, just cars.

Here’s the difference between the Nissan and Infiniti. The Armada has just a 5-speed automatic transmission while the higher-horse Q56 boasts a 7-speed automatic that delivers better fuel economy. Both shift incredibly smoothly, so from a driving standpoint you’d be satisfied with either, but the Armada drinks like a drunken fleet captain.

Power, not surprisingly, is stellar from the big V8 and couple that with the smooth tranny and you’ll feel you command the road. Likewise, the independent suspension at all four corners give Armada a super controlled ride. Railroad tracks, pot holes and the like really barely faze the Nissan. Stability control also is standard and this model came with 4-wheel drive.

Braking is provided by four wheel discs, but because of the truck’s weight, 5,841 lbs., you need to remember to brake early as the truck’s momentum can carry it forward with more velocity than you might be expecting. I found myself braking, or getting off the accelerator, earlier than even in other trucks as I approached stoplights.

Pricing might seem high to the uninitiated, but isn’t out of line with the competition. The tested 4-wheel-drive model lists at $56,180 and with the Platinum Reserve package ($2,090) and a $995 delivery charge hit $59,265. That used to be enough to buy a home, and this feels like you’re driving around in your living room, but compare that with $59,765 for a comparable Suburban LTZ with 4-wheel drive, or $57,725 for a Tahoe LTZ. 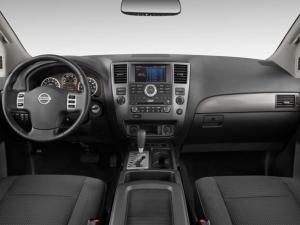 Let’s move to the interior, which is drawing-room comfy, thanks to that reserve package’s baby-behind-soft leather seats. The Java Metallic (a spiffy metallic brown) test truck featured a two-tone chocolate brown over tan interior, with the seats trimmed in the darker shade. It looked ritzy.

But there’s more, including a light tan wood trim on the doors and console, plus dark satin toned chrome trim. The tilt/telescope steering wheel is swathed in a soft thick leather and naturally the radio, cruise control and phone controls are on the hub. The wheel also is heated.

There’s also keyless start, automatic lights and sonar object avoidance you can switch on or off. It beeps if you get too near another object front or rear, plus there’s a backup camera that shows on the nav/radio screen mid-dash. Armada also has power-adjustable pedals, so shorter drivers can move the brake and accelerator a little closer, if need be.

Need more power? Well, the rear hatch powers up and down, as do the split third row seats. Press a button in the cargo area and down they go, individually. So you can carry up to 8 adults, or fold down one seat and carry 7 and more luggage, or fold down the wider back seat and carry 6 adults and their luggage. Yes, there’s a roof rack up top too, but you’ll need a step ladder to get up there. For the record there’s 20.0 cubic feet of cargo room behind the rear seat.

While the seats are comfortable in most ways, shorter driver’s will notice that the bottom seat cushions are rather long, so can press uncomfortably on the back of the knees. I also wonder why a luxury vehicle like this only has two-level, not three, seat heat. One other downer, the big V8 isn’t the easiest to start at times. I’d crank the engine and it would often die after the first crank when first starting the truck. Crank it a second time and it’d restart easily. That was odd.

What isn’t odd is the comfort and the goodies you have at this price point. In addition to those mentioned above, there also is a dial to set the vehicle in 2- or 4-wheel drive, a tow mode button, easy to figure out and use touch screen for the radio, big running boards to help you climb aboard, a huge storage bin between the front seats and a large fold down screen for the rear seat occupants to watch, along with individual video screens in the back of the front seat headrests.

Overhead there’s a sunroof too, plus the sun visors have extenders.

There’s not much more a person, or large family could want in a big hauler like this, except better gas mileage. If you have this sort of coin to drop on a luxury ute, and need/want all these features, I’d consider moving up to the Infiniti for that 7-speed automatic and the gas savings it could yield over time. If you need more space yet, go the Suburban/Denali route for roughly the same cost, and its 5.3-liter V8 is rated at 15 mpg city and 21 highway.

Misses: Horrible gas mileage, long seat bottoms tough for short-legged drivers, only two-level seat heat and engine tended to die after first crank, so had to restart before beginning a drive.

Made in: Canton, Miss.