There may be something sweeter and more nostalgic than a 1967 Shelby Mustang GT500, but I can’t think just what. 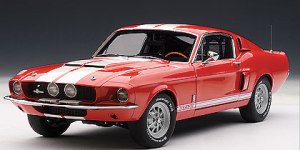 Autoart outdoes itself with this gorgeous red 1:18 diecast with broad white LeMans stripes nose to tail and at a relatively low MSRP of 164.90. Let’s face it, quality 1:18 die-cast cars are now in the $150-$175 range regularly.Racing legend Carroll Shelby (RIP) started building Shelby Mustangs in 1965 while he was working closely with Ford to power his race cars and then managed its LeMans race team and its famous GT40s. By 1970 he left all the Mustang building to Ford, but in the interim he and Ford churned out some of the fastest and most memorable Mustangs and in 2007 Shelby revived the Shelby Mustang.

Many think 1967 was the pinnacle for Shelby’s Mustangs. Certainly their fastback styling set the tone for car design for years to come. First Shelby created  the GT350 with a high-performance 289 motor, but the GT500 powered up with a 428 cid Police Interceptor V8 engine that cranked more than 350 horsepower and did a quarter mile at 99 mph and 0-60 in 6.2 seconds. 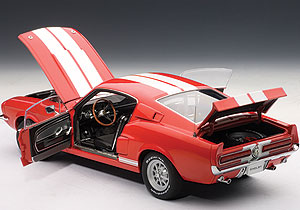 Outside, Shelby added fiberglass pieces to aid aerodynamics. The car had a longer nose than a standard Mustang, four body side air scoops and two on the hood, plus a small spoiler in back with sequential turn signal lights, reportedly off the Mercury Cougar of the time. Many also had high-beam lights centered in the grille, which this model features.

Performance: There’s no way this drop-dead lustrous red and white Shelby Mustang won’t be a show stopper in your display case.

Autoart did its homework and perfectly replicates the GT500 with its twin air scoops on each side and the hood, plus small spoiler in back. There are chrome hood pins, wipers, mirrors and door handles along with window trim, including vent windows. In back are the Cougar-like lights and Cobra gas cap. Cobra emblems grace both front quarter panels too.

Naturally the hood, doors and trunk open, with a spare tire in the trunk and the muscular 428 cid V8 up front. This is well detailed and will make it hard for buyers to decide whether to display this model with the hood closed, or opened to expose the V8.

Inside the interior looks authentic with a wood 3-spoke wheel with chrome center and the dash is finely detailed, including the Shelby signature on the glove box door. There’s a roll bar and cloth look seatbelts too.

The underside is well detailed and the car rides on Radial T/A BF Goodrich tires that give the Shelby a muscular look.

Final thoughts: Mustangs, old or new, remain popular and are second only to Corvettes in their demand by die-cast collectors. If you’re a Boomer, this is one that you remember, and you’ll be proud to have it front and center in your display.