Perfect timing! I had just driven the raciest version of Fiat’s tiny 500, the Abarth, when an even racier MINI Cooper Coupe, the John Cooper Works, or JCW, edition slotted into the test garage.

The Coupe is MINI’s new model, with no back seat and a lowered roofline that gives it a distinctive profile, and some might say, a more buglike appearance. Bathed in Midnight black paint with a red racing stripe – reversed on the red roof with a black racing stripe – the JCW was hot. Women loved it! Even my car-neutral wife commented on its great looks, and THAT’s rare!

Here’s the deal. The MINI Coupe is a two-seater that isn’t afraid to admit it and it has attitude, plenty of it. Yet the JCW version turns that up a couple notches. It has a BAD attitude and wants to kick some booty, all the while looking like it’s a super cute runabout. BMW makes the MINI in Oxford, England, but the high-performance engine and transmission are straight from the parent company in Germany.

While the base MINI Coupe features the standard 121-horse 1.6-liter I4 that powers other Coopers, the JCW model cranks that to 208 horses by using direct injection and a turbo. It couples that with a 6-speed Getrag manual transmission that means business.

There are long throws here, but the tranny feels stout and it’ll handle whatever the turbo pounds out. You can chirp the tires if you drop the clutch quickly and the MINI launches away from stops. Where the 160-horse Fiat turbo was sporty and fun, the MINI Coupe is seriously racy, offering dynamic power.

The MINI, despite its name, is larger than the Fiat 500. It weighs nearly 200 lbs. more, but rides on a 97.1-inch wheelbase compared with the Fiat’s 90.6 inches. The JCW model also boasts 17-inch tires compared to the Fiat’s 16-inchers. Overall the Cooper feels stronger, larger and more comfortable. 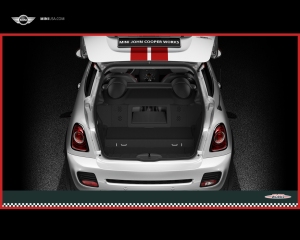 Its rear hatch opens to hold nearly 10 cubic feet of cargo while the Fiat’s will hold 7 cubic feet, although the Fiat’s rear seat will fold down to hold more, but the seat doesn’t fold flat.

Handling remains the MINI’s trademark and makes all of its models fun to drive. The JCW Coupe though feels like it’s racetrack ready. It corners flat and quick. Steering is precise and there’s a fairly heavy feel to the thick steering wheel.

The performance aspect you may not like, why most of us might favor the mid-range S model, is the $500 extra sport suspension that turns the ride super stiff, to the point of punishing on our rougher roads. If I was on a smooth racetrack, I’d probably eat this up, but on city streets it’s jarring.

You’d think with all that power and attitude the Coupe might punish you at the pump, but even with my heavy-footed driving I managed 29.0 mpg, with the trip computer estimating a much more robust 32.6. The EPA says to expect 25 mpg city and 33 highway. My driving was about 60% city. For the record, the base MINI is rated at 29 mpg city and 37 highway.

While I loved the car’s exterior and its performance, I admit I’m way beyond tired of the kitschy interior with all its circles, the giant speedometer and info readout at the dash’s center, the hard to get at toggles and its teeny tiny buttons.

Hate is a strong word, but let’s say I’m not a fan, in any way, of the tricky stereo system either. A friend who owns two MINIs said this one was far worse than his, and he isn’t fond of his cars’ systems. Suffice it to say this is as bad, or worse than BMW’s first trip info/radio system that required the use of a big console knob. There are so many layers and functions here that this system should not be used while the car is in motion as you fiddle with a little joy stick that can be rotated between the front seats.

Finding a local radio station was a two-day job of playing with the fiddle stick and then the system did not want to remember the station in my giant list of out-of-town (Chicago) stations that already were programmed into the car. To quote Charlie Brown, “Argh!”

In addition to all the interior’s circles (Fiat copies that, but it’s cuter in the Italian car!) there’s a circular key fob that slides into a port on the dash, before you press a button to start the MINI. All the window controls are toggles at the base of the center stack, and there’s a fine navigation system built into the giant, and I mean Giant, round gauge dead center of the dash. There’s a speedometer there too, along with the radio and trip computer info. Luckily there’s a small round gauge atop the steering column that features a digital speed readout, which is much more useful.Oddly there’s an oval glove box release and oval design in the doors though, spoiling the symmetry of the interior’s circle-fest. Fit and finish appear good throughout, but there was a rattle as if something were loose in the back, especially noticeable on bumpy roads.

Before we move on to the ever important pricing, I do want to praise the gimmicky overhead ambient lighting. There’s a toggle for that too that adjusts the light’s color. Very cool, especially the blue and green!

Pricing might scare a lot of folks off the JCW version, which starts at $31,200, and there’s a $700 delivery fee. The test car went hog wild with options, including a black and beige leather interior that adds $1,500. Even the black metallic paint costs $500 extra. But add in all the electronics, the cool racing stripes, etc. and this model hit $38,450. That’s high.

But there’s hope for those of us who paid less than that for our first house. The base MINI Coupe with its 121-horse engine starts at a very approachable $21,300 and the S model at $24,600 and its souped up engine delivers 181 horses and 27 mpg city and 35 highway. THAT may be your most economical and fun route, maybe allowing your wallet to stretch just enough to add a few fun features, like the racing stripes!

Misses: Ouch, a super stiff ride and kitschy interior with too many circles and toggles and tiny buttons. Radio controls were the worst to adjust I’ve ever used, way too confusing and distracting to a driver.