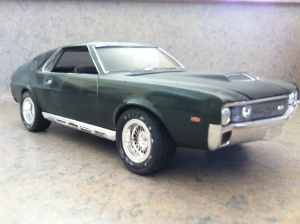 This is by far my most favorite car AMC ever made. If I had the cash, and good ones go for about 25 grand, I would go out and get one. Looks and power in a small package. I did own one, once, and it was a disaster for me. Hellbent on getting one of these, I found one for $2,500. That should have been my first clue of impending disaster. When I jambed the throttle, it pinned me to the seat, I laughed and the tires screamed! What a hoot. Then the engine blew up. A 390 which would not be easy to find. I found a 360 and actually tried to install it myself which would be about the same if I tried doing open heart surgery. I know where all the stuff is and what it does but was in way over my head. I eventually sold it to a fellow member of the American Motors Owners Association. 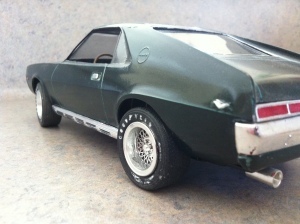 When he came to pick it up, he gave me a lesson on what to look for. The back sail panels were mostly bondo, the floor pan had rust. I got $1,500 for it. That was one expensive lesson. After that, I built this model you see. it’s the same color of the one I had, briefly, including the shadow black hood.

American Motors needed to shed the econo car image and debuted the concept in 1966 as one of the company’s Project IV show tour. The AMX name originates from the “American Motors eXperimental” code used on a concept vehicle. What AMC essentially did was shorten the Javelin taking out the back seats. AMC launched the car using Craig Breedlove to break all kinds of records. I saw his

blue, red and white car at the Chicago Auto Show in 1968. AMC was touting this all over the place including the company’s magazine I dug out of my collection. The car had all kinds of innovations and won all kinds of awards. AMC sold 6,725 of them in 68, 8,293 in 69, its first full model year, and 4,116 in 1970, its last year. After that it was offered as a performance package on the Javelins. Too bad because there was a 2-door concept made on the 71 body but it never made it to production. A lucky guy owns the concept and brings it to meets. It looks really cool. Because 1970 was the last year for the AMX, and there were fewer made, the 70 is more sought after. One cool thing AMC did was put a plaque on the dashboard stating the build number.

OK, so now to the promo models, which I have found are a lot easer to maintain and of course cheaper to buy. Like the real deal, these too are becoming difficult to find. The 68/69 model (background image) I have seen for around $70. The 70’s (front image) a lot more, a lot more. This ’70, next to the ’68 are part of my collection. Both are mint and I have the boxes. The 1970 would easily go for upwards of $300. One thing to keep in mind when discovering one of these jewels before you plop down the cash is the window side posts in the C pillar. The 68/69 will not have a post while the 70 will. Also make sure the stick shift is there as these have been know to fall out. Like I said, I love the AMX! 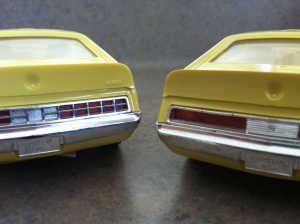 For 1971, until the end of the production run for the Javelin in 1974, it became an option which included a different grill than the standard Javelin. Not that this wasn’t a still a cool car. My dad brought one home for me at graduation to drive for the weekend. I like the lines. It had a 401 and 4-speed. Boy did it scoot! On the two Javelin/AMX’s from my collection, a 71 is on the right and a 73 on the left. The only difference are the taillight treatment. The chrome on mine is OK but since I’ve moved them around a lot, there are some scratches on the roof. I think I can buff them out but have never gotten around to it. These will go for around $70 again based on their condition. Fun cars.