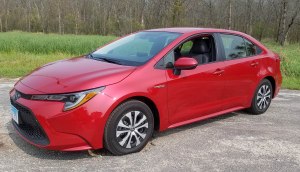 After weeks in high-powered muscle and sports cars it was refreshing to get back into an easy-driving sedan with simple controls and stellar gas mileage.

This, my friends, is the beauty of a Toyota Corolla LE Hybrid. Oh, it’s not exterior beauty as with the others. However, Toyota’s 2021 Corolla is pleasant enough looking.

No, this is simplicity and value delivered in a handsome package so you don’t feel like a geek driving an odd-shaped hybrid that garners road rage among those who prefer power over efficiency.

I’d driven the revamped Corolla Hybrid about 17 months earlier, so you may note my opinion hasn’t changed much, other than I noticed more road noise, mostly from the tires and beneath the car, in this Barcelona Red Metallic test car.

The hybrid power is vital to this Corolla’s value. It barely costs more than the gas-only models, yet the 1.8-liter I4 coupled with the hybrid system delivers a pleasing 53 mpg city and 52 mpg highway according to EPA estimates.

Yet I’m here to tell you it’ll beat that. Last test I managed 55 mpg in cooler weather. This time I crushed that with 65.6 mpg, almost exactly what the trip computer was telling me I was getting. That alone is amazing. Trip computers usually estimate considerably higher than real mpg.

So mpg is a major selling point, but it’s not all the Corolla hybrid has in its quiver. Toyota also replaced the torsion beam rear suspension with an independent setup that vastly improves Corolla’s handling and ride.

Handling is light and easy, if a bit lazy, but that makes the car simple to maneuver around town and in tight parking lots. Steering effort is light and while far from sporty the car is easy to control, fine for a family sedan.

Ride is above average too with that new rear suspension helping provide a more controlled ride on choppy roads. You’ll still feel the big bumps, but they won’t create a severe ride.

Then there’s acceleration, well sort of. As I said last time, there’s no hiding that the hybrid power feels mild as you accelerate to cruising and highway speeds in Normal mode, and even worse in Eco. The gas and electric power here is rated at 121 horsepower, but with just 105 lb.-ft. of torque. Naturally the hybrid’s electric power gives you a decent initial power boost up to about 10 mph, then there’s a lag and the car’s power plant works methodically to reach 40 and beyond.

Yet that drive mode button on the console allows the car to be put in Sport mode. That increases the pace of acceleration and honestly I used this mode most of the time, and still got that exceptional gas mileage. It’ll make the gas engine sound like it’s working fairly hard, but things quiet down as the electronically controlled CVT settles. Plus shifts are seamless.

I also noticed more road noise in this test car, primarily on cement pavement where more road roar seeps in through the tires and floor. It’s noticeable, but not overwhelming and I should note I’ve had a spate of extremely pricy luxury vehicles prior to this where road noise was minimal.

Inside, the simplicity is what hooks me. The dash is well laid out with an 8-inch infotainment touchscreen that’s easy to use, even while driving. Fewer and fewer vehicles can claim that.

The dash and much door trim is hard plastic, black over gray in the test car, but attractive. Seats are gray cloth with dark gray backs to add a touch of style. Trim is pewter, with piano gloss black on the stack and by the shifter. Climate controls are simple and feature two big knobs, but the buttons on the edge of the infotainment screen are rather small.

These manual cloth seats are well shaped for comfort and there’s a pump handle on the driver’s seat to allow it to be raised and lowered. The seats are not heated. Head and legroom are good front and rear and the trunk is large, another plus for families.

Corolla also includes a manual tilt/telescope steering wheel, push button start, inside fuel and trunk releases. Standard now are additional airbags for the rear seat, plus the stop/start feature to safe fuel and an Android Auto hookup so you can link up a phone. No wireless charging here yet though.

Additionally there’s a vent window between the A-pillar and side mirrors which helps improve side views. The only downside inside is an annoying beep that sounds when you leave a window down and shut the car off. Window Open it cries from the dash. Hmmm, that’s something people do a lot in summer and fall. Grrr!

The only extra as far as safety, is a blind-spot monitor and rear cross-traffic alert system, which costs $500 and is worth it. That was the only option on the test car so brought it up from its $24,355 starting price, including delivery, to $24,855. Believe me, that’s a bargain considering all you get and the economy of operation with the hybrid. 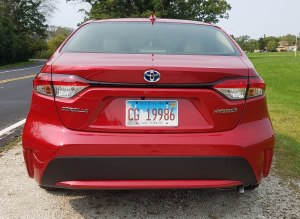 For gas-lovers who prefer to use only fossil fuels, Toyota continues to offer the standard 1.8-liter I4 139-horse powered Corollas in L, LE and XLE trim, starting at $20,780, including delivery. The LE is just $450 more and garners some improved features.

In any trim the Corolla is a bargain, but I like the hybrid! 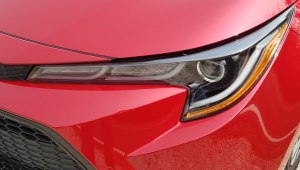 Misses: Road noise a bit high, small buttons on info screen, no heated seats and an annoying beep if windows left down and ignition turned off.