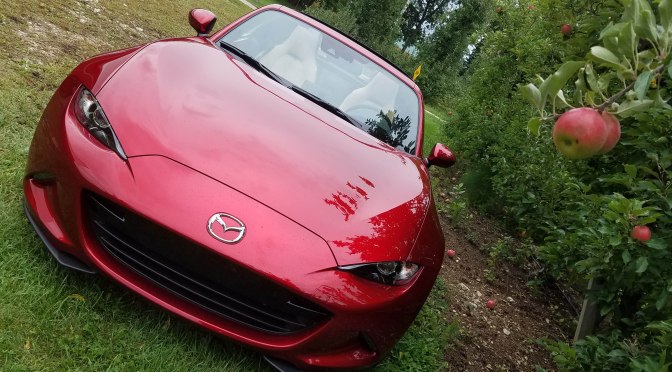 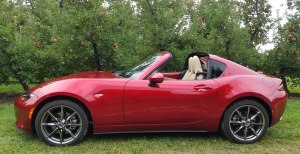 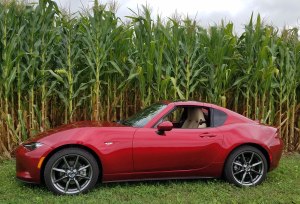 For years those of us who dreamed of owning a sports car envisioned a British MG TF in British Racing Green with a tan interior.

MG’s TF was the epitome of what a sports car should be, and look like – cute, stylish and nimble. It also was a British car, so electronics were suspect.

You’ll notice I didn’t mention power, because sports cars are not muscle cars, they are quick, nimble and fun to drive. They don’t throb at a stoplight like a stereo’s bass speaker about to explode. They purr and chortle. 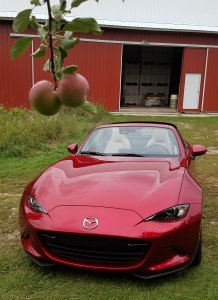 They also are as rare as an albino rhino or ethical politician. For the past 30 years there has mostly been just one true sports car on the market in the States, Mazda’s MX-5 Miata. Oh, there were a few other pretenders, but none with staying power. And, for the record, there is the Fiat 124, a relabeled Miata with somewhat different body work.

Mazda launched its Miata in 1989 as a 1990 model and at least one automotive writer (me) named it his Car of the Year, garnering my first Zoomie Award. To show how out of synch Motor Trend magazine was at the time, it named the Lincoln Town Car its 1990 COY and followed with Chevy’s whale-like Caprice Classic LTZ Hmm!

Miata has stayed true to its roots, remaining small, nimble and cute as Paddington Bear on roller skates. Yet it has changed too, all for the better. 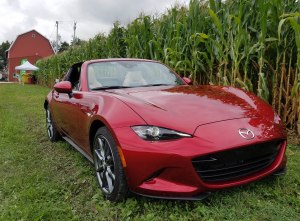 The changes have been the addition of a power retractable hardtop, the tested RF model, and its I4 keeps gaining steam, so now produces 181 horsepower. This, my friends, in a roadster weighing just 2,452 lbs.

Still, that doesn’t make it a challenger to say, a Dodge Challenger, it just quickens its pace, and there’s nothing wrong with that.

Mazda also has developed the most spectacular red paint color, Soul Red Metallic, that some of us Boomers think looks a lot like Candy Apple Red from our youth. It sparkles like a diamond in the sunlight, and it’s only $595 extra. The color upgrade was the only option on my test car, the MX-5 RF Grand Touring.

What driving purists continue to love about the MX-5 (its official name) is its simplicity and affordability. It’s a dream car for the masses, which is why more than a million have been sold in 30 years. 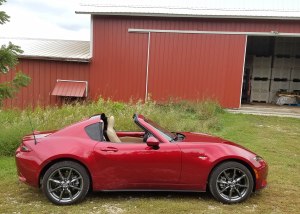 This latest RF is a perfect example, starting at $33,990 in base trim and just $35,345 as tested in top-level Grand Touring trim. With the RF you get the power hardtop which neatly and mechanically stores itself in front of the precious trunk in about 10 seconds.

Standard too is a 6-speed manual transmission, which is a delight if you are old enough to know how to work it, or were taught to use a clutch by your dad or mom. Hook that manual up with the 2.0-liter SkyActiv-G I4 engine and you can slip through the gears and zip up to highway speeds in a jiffy.

Shifter throws are short, precise, and easy allowing the perky powerplant to sing sweetly while delivering increased power to the rear wheels. Some chirping is possible and the power is perfect, in my humble opinion.

Handling remains stellar, both light and precise. Some liken Miata to a go-kart, and there’s some truth to that as you can toss it around curves at will. It sticks well to an apex and shifting through the quick gearbox helps it power out like a hummingbird flitting off to its next nectar-filled blossom.

Ride remains a bit jiggly, but you’re in such control with Miata that you’ll rarely care. You can dodge pot holes and minimize your trampling of any rough spots on the road, adding to your car control fun. And yet, with a miniscule 90.9-inch wheelbase the ride never becomes brutal, as one might expect. Thank the GT’s Bilstein shocks, which are part of the sport suspension that also includes a strut tower brace in back. 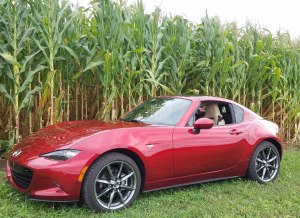 Good brakes also slow the MX-5 and the GT comes with as much safety equipment as you find on some luxury sport sedans. Standard are blind spot monitoring, rear cross traffic alert, lane departure warning, and rain-sensing wipers. Note too the Bilstein shocks, Brembo disc brakes and a limited-slip differential are standard on the GT.

Also standard on this top-line model, one up from the Club trim, are automatic climate controls, leather trimmed seats, adaptive front lighting and automatic high beam lights, and a navigation system.

Again, the cockpit is simple with everything easy to see and reach, plus big climate controls. I also like that a quick button tap turns off the beeping lane departure assist feature. Plus it’s cool here how Mazda brings the sterling outside color into the cockpit by painting the interior door top trim in the body color. Otherwise seats were tan leather and the dash was black over tan, classic sports car colors.

I do take exception to two features though, the console-mounted knob to adjust the infotainment screen is still awkward as all get-out. A proper touchscreen is needed. Plus the power roof button works opposite of what’s intuitive. You pull up the toggle to lower the top and push it down to raise it. What? 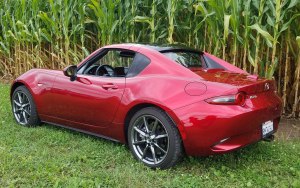 You learn to live with it though and once you’ve settled into the racy supportive manually adjusted seats you forget about most everything except the fun you’re having driving the MX-5. Plus the seats are heated, meaning you can enjoy your drop-top a little later into a Wisconsin fall. 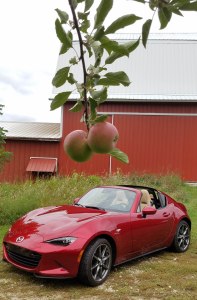 A few other points to consider. There’s a removable cupholder that extends into the passenger’s side upper foot well, about where a passenger’s left knee would be. There’s another between the seats and behind them a bit, which is OK for a passenger, but not a driver, to use. Note too that for years Miata has had a bulge in the passenger’s floor foot well. It’s still there.

Tall riders also could find headroom a problem, especially those with long torsos. But the MX-5 is a great drive for 6-footers and shorter.

In back is a 4.5 cubic foot trunk, which isn’t a lot, but would hold a couple overnight bags and a briefcase. 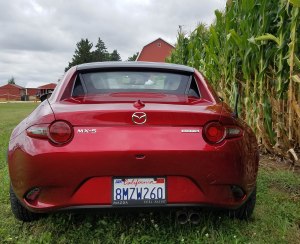 Gas mileage is super. I got 37.5 mpg in a week’s test on highway and city streets, usually with a passenger aboard. The EPA rates the RF at 26 mpg city and 34 mpg highway. It’s rare I beat the EPA numbers, and I certainly wasn’t lollygagging.

Then there’s that price, mentioned above. With only the paint as an option the tested Grand Touring model was $35,940. A Club trim level lists at $32,615 and has much of what the GT has, minus the leather seats, some of the safety features and fancier lights.

Oh, and those of you who would spoil an MX-5 Miata with an automatic transmission will have to pay between $600 and $1,350 extra for the privilege, depending on trim level. 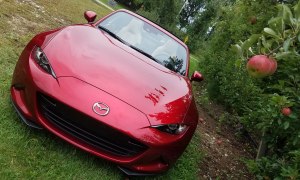 And remember a manual soft-top Miata is still available too, but a bit noisier inside vs. the RF hardtop. It lists at $27,525 in Sport trim and goes up from there.

For my money (which is possible at this price), I’d go with the RF’s GT version and slather it with Soul Red Metallic. Awesome!

(And a special thanks to Barthel’s Fruit Farm in Mequon for allowing me to photograph the car there this fall!)