You may be a Ford guy or a MOPAR maniac, but there’s no denying that Chevrolet is, and has been, the top-selling domestic brand for decades.

And while Johnny Lightning is an equal-opportunity die-cast car maker, it makes sense for the maker of 1/64 scale cars and trucks to go heavy on Chevy (and its kissin’ cousin GMC) once in a while. Indeed JL does just that with its latest releases of the 1987 Chevy Monte Carlo SS, 1972 Chevy Vega Panel Express and GMC’s muscular 1992 Typhoon.

There are two versions, A and B, so you could snag two of each, but in different colors, or just collect the A or B models. Plus these latest releases are part of its series that include a cool storage tin with a picture of the model on each side and the Lightning logo on the top and each end too. 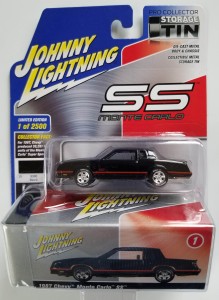 Easily the most famous of these is the Monte Carlo SS, which was made for many years before becoming Chevy’s Lumina. It was a sort of personal luxury coupe with a performance bent, thus the SS (Super Sport) designation. Heck, even NASCAR’s main man, Dale Earnhardt, who raced Monte Carlos, plugged them and there was a special Earnhardt edition too.

The Vega was popular initially, with attractive styling, and GM decided to produce more than just a subcompact 2-door hatchback, notchback, and Kammback (wagon), venturing into a panel truck vehicle with the Panel Express in 1972. Remember Ford’s Pinto lineup included a wagon at this time too. 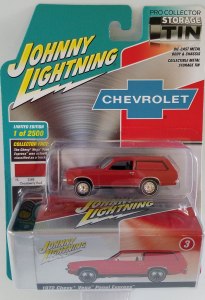 Ironically, the small Vega’s Panel Express model was considered a truck with a low storage floor. That meant it could avoid some safety requirements needed in cars, and keep costs down. Its rear side windows were replaced by steel panels and a passenger’s seat was optional, but is included in the JL models.

The Typhoon was likely ahead of its time, a muscle truck before much of the world realized they wanted a truck, not a car, in their driveway.

I was at the North American International Auto Show in Detroit when the Typhoon was unveiled and there was a good deal of excitement, many feeling General Motors was coming out of its funk with some specialty products like the Typhoon. 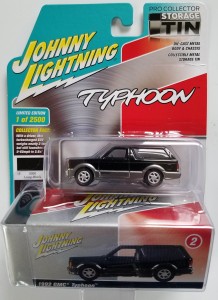 Ultimately just 4,697 Typhoons were built for 1992 and 1993 combined. Power was its gig, with a 4.3-liter turbo V6 giving it a generous, for the time, 280 horsepower. That was way up from the 190 this Vortec V6 created in the original Jimmy that the Typhoon was based on. For the record, Car and Driver magazine at the time said a Typhoon would do 0-60 mph in 5.3 seconds with a 95 mph top speed in the quarter mile. Brakes were beefed up to and there was an air-operated self-leveling rear suspension.

Supposedly Bob Seeger and Clint Eastwood each owned a Typhoon.

We know what to expect from JL, fine dies with accurate body shapes, and being metal they have a solid feel. Detailing is always nice too and the chassis also is detailed with suspension, drivetrain and other underbody features.

The Monte Carlo comes in white for Version A and black for Version B. Both have a red accent stripe along the lower portion of the car, SS logos at the lower front edge of the doors, red and amber side reflectors and well-marked tail and headlights. Both also have gray plastic interiors and big chrome sport wheels and Goodyear branded Rally GT tires.

The Vega panel trucks are both bright, one Cranberry Red, the other Mulsanne Blue Poly, with black and silver lower body trim and black plastic interiors. Each has black outline trim around the panels that replaced the rear side window. I appreciate the fine silver painted trim over each wheel opening and for front and rear bumpers too. Again, each has side reflectors and thin white-walled tires. Hub caps are solid chrome with slight indents around the rings. Front and rear windows are trimmed in silver paint as are the door handles and key holes.

Typhoons look like slightly souped up Jimmys, which they were. Both look muscular but being two-doors they aren’t as long as, say, a Suburban. These are Lamp Black and Forest Green Metallic, both with silver cladding along the bottom edges and over each wheel well. Again there are painted silver-gray bumpers and crisply painted lights front and rear, along with red GMC initials on the black grilles. Tires are not branded on the Typhoon, just blackwalls on 6-spoke wheels.

In the 1:1 car world the Typhoon’s most popular color was black, 1,262 being made, while the Forest Green Metallic was less popular, just 82 made. So the JL cars cover two extremes. Rarest are the Radar Blue and Raspberry Metallic Typhoons, just two of each color were made. Maybe we’ll see those in a future JL release!

One more thing, like all JL cars and trucks, the hoods open here so you can pose these with hoods up and see an engine. And remember, each comes with a clever and attractive storage tin. All these GM vehicles are sold individually, not as a set of six or two sets of three. 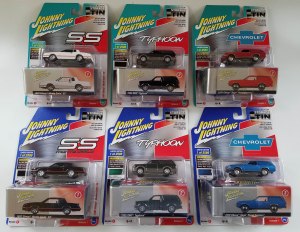