What car lover doesn’t long to own a Hertz-intended Shelby GT350, a rare black fastback Mustang from its 1960s hey days?

Most of us would part with some serious coin for one of these black beauties in any size and now Auto World delivers a stout one in 1/18 scale as part of its American Muscle series that reproduces cars honored at the Muscle Car and Corvette Nationals events.

Like others in this series it’s a high-value die-cast metal model with opening hood and doors and a finely detailed interior.

This version is of historical note with a serial number ending in 117 and being one of the few GT350s originally built for Hertz rental cars. The plan was to rent out these souped up Mustangs with Shelby detailing and performance to customers who didn’t mind paying a little extra for their hot rod rental car.

Sadly the program died before many of these were made, just 52 GT350s and 3 GT500s that Shelby had ordered for Hertz. Once the program was nixed Ford discontinued the special Raven Black color and ceased building the models.

It includes a couple early production features, including inboard driving lights in the grille and red safety lights in the scoops on the rear roof pillars. Both represented on the model here.

At some point the Newton family stored this black Shelby in a Sea-Land Container on jack stands with various materials and debris around it Auto World tells us. The good news though, when it was rediscovered in the early 2000s the car was still intact with all its original parts. Restoration followed, and the model reflects the car as it is today.

Sexy and sleek in black, this Shelby Mustang looks like it’s ready for the track, all it needs is a number and a racing stripe or two.

Hood and doors open, revealing a blue-block Ford V8 with Cobra header covers, a chrome air filter cover with a “289 cubic inches” orange and black sticker on it and extra bracing to stiffen this up for performance. Plumbing is here with a radiator hose, but no wiring. But there is an “Autolite” battery.

Inside are ribbed bucket seats with backs that can be flipped forward, plus a chrome three-spoked steering wheel that’s tan to resemble wood. The dash and gauges are well detailed and there’s the Shelby Cobra logo on the passenger’s side dash and a monster shift knob extending from the transmission hump on the floor, along with a couple round gauges just above it.

Windows are trimmed in silver paint and there is a chrome mirror, door handles, antenna and vent windows, along with front and rear bumpers, hood pins up front and windshield wipers.

The grille is black plastic with inset driving lights and the Shelby logo and there’s another gold logo on each front fender just in front of the doors and above the white G.T. 350 racing stripe along the car’s sides. This model also includes twin black air scoops, one just behind the doors and another on the roof panels beside that large rear window.

In back are dual chrome-tipped exhausts, a gas cap with Shelby Cobra logo and red plastic bar taillights. There also is a prominent seam delineating the trunk, although it does not open on this model.

Below are Goodyear branded tires and five-spoke chrome wheels with black interior space between the chrome spokes. And as with other American Muscle models from Auto World, the undercarriage is nicely detailed with the twin exhaust pipes, fuel tank and full suspensions front and rear. Plus the front wheels are steerable and you see the lower portion of the blue Ford engine block.

One display note: You’ll want to wear soft cotton gloves when handling this model as fingerprints readily show up on the gloss black paint. 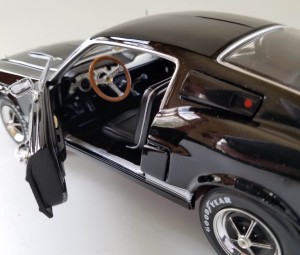 Yet for Shelby Mustang lovers that’s a minor issue as this Raven Black beauty is a fine collectible of a rare GT350.