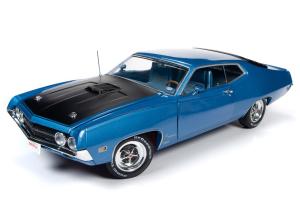 My wife’s family had an early 1970s Ford Torino, and while it looked OK and had oodles of power, it wasn’t really a very good car.

But these were the big Fords that raced in NASCAR in the day and in coupe version had a fastback roofline, so weren’t hard on the eye. Let’s be honest, the Torino was a bargain compared with some other muscle cars of the time, especially Ford’s own Mustang.

So it makes perfect sense for Auto World, one of Round2’s die-cast car brands to deliver a sharp 1970 Torino Cobra, or Cobra Jet as Ford liked to call the model. This one is in 1/18 scale and in keeping with one of Auto World’s latest marketing efforts, the review model is a reproduction of a car that appeared on Hemmings’ Muscle Machines magazine cover in September 2018.

Like all of Auto World’s American Muscle series cars, the Torino’s hood, trunk and doors all open, the front wheels are steerable able and the model’s body is metal.

Bathed in a sharply executed medium blue metallic paint job with a flat black racing hood and Sports Slats rear window, the car is a dead ringer for the Hemmings’ cover car owned by Ed Nowakowski.

Auto World tells us Nowakowski not only raced Mustangs in the 1970s, but is devoted to Torino Cobra Jet-powered models, owning six through the years, and buying this one about 16 years ago. Reportedly Ed raced this model (equipped with a Super Cobra Jet Drag Pack) at the Pure Stock Muscle Car Drag Race a few years ago setting a quarter-mile time of 13.30 seconds and a speed of 107 mph. Not supercar speed to be sure, but respectable for a 1970s muscle machine to be sure. 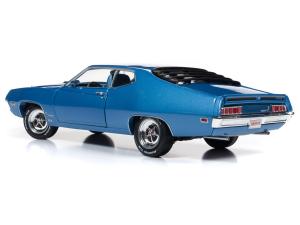 In fact, the 1970 Torino was Motor Trend magazine’s Car of the Year, for what that award’s worth. Remember that in 1971 Motor Trend picked the Chevy Vega and in 1974 picked the Mustang II. 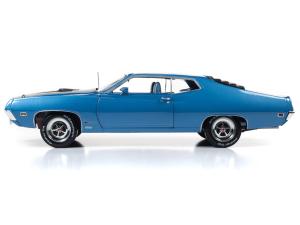 Auto World says this car is rare not only because of its medium metallic blue exterior, but because it also has a matching blue interior. It’s a sharp look, especially with the black hood and rear window slats.

I like the painted silver window trip, body-colored mirrors, which came on the Cobra, plus the chrome door handles and subtle painted silver trim over each wheel well. Simple is often better, and the Torino was a simply styled car, letting its engine do the talking. 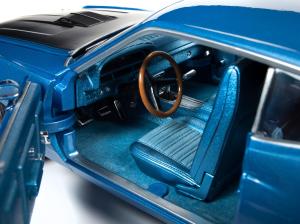 Both the nose and tail look good with the blacked-out grille and good-looking head and taillights. There are Cobra Jet script logos on each side of the shaker hood scoop. Plus, I think the sharp chrome Magnum wheels with BF Goodrich Radial T/A tires make a strong visual performance statement, as do the twin pipes in back. There’s a fully detailed chassis too.

Under that big hood is a nicely detailed blue V8 with chrome headers, the Ram Air intake sitting atop the big blue air cleaner, along with plumbing and wires. While inside are the blue ribbed bucket seats, a wood-look three-spoke steering wheel, and well detailed dash gauges and console. Heck, there are even chrome door-lock buttons sticking up inside the doors. Remember those?

If you’re familiar with Auto World’s fine lineup of American Muscle die-cast models you know you’re getting good quality at an affordable price. With this model you also get the exclusivity of a surviving Torino that is so cool it made it on a car magazine’s cover. Fun!