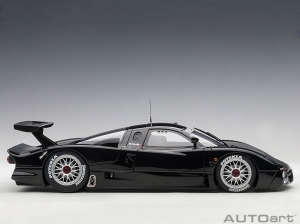 Le Mans racers have always been cutting edge, even in the 1920s and ‘30s when the endurance race was new. But for the past 20 years or so many of the top cars have developed into bubble-top racers with carbon fiber chassis, and engines that are near bulletproof.

In 1998 Nissan rolled out its R390 GT1 for the famous 24-hour race in France, and for the remainder of the endurance racing season. It was a looker, as is this all black 1/18 scale version from Autoart, where the detail moves to a new level for the composite die-cast car maker.

Aimed to replace Nissan’s popular and successful GT-R Skyline on the endurance racing circuit, the R390 GT1 was designed for the Grand Touring (GT) category. But in the late 1990s those were looking a lot like the prototype racers, even though they were to be based on production cars. Nissan did build one road car, but eight GR390s to race over 1997 and 1998. 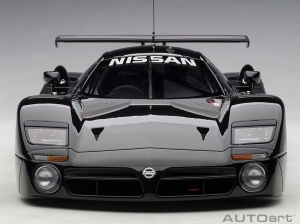 Nissan worked with Tom Walkinshaw Racing and its designers Tony Southgate and Ian Callum developed the racers with Nismo’s Yutaka Hagiwara. They started with a carbon fiber chassis, double wishbone pushrod front and rear suspensions and then bolted in a 3.5-liter V8 twin-turbo for power. The racer weighed in at 2,269 lbs.

The 1997 24 Hours of Le Mans was the car’s first race and three were entered. They qualified 4th, 12th and 21st, but only one was able to finish the grueling 24 hours, despite two gearbox changes. It was 12th overall. But for 1998 the Nissan was more reliable with all four entries finishing the race well in 3rd, 4th, 6th and 10th. Only Porsche 911 GT1s beat the Nissan.

As often happens in endurance racing, the rules then were changed and Nissan dropped its GT efforts, moving to the LMP class. 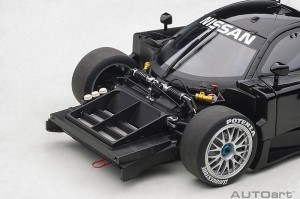 Wow, this is one of Autoart’s best detailed racers to date, and that extends from nose to tail on the Nissan. First, you can take the body’s nose and tail covers off to reveal much of the black racer’s fine details.

In front there is a massive radiator that lays flat under the hood, plus a detailed suspension and air scoops for brake cooling, along with horizontal shocks and its wiring just in front of the big windshield.

In back, this Nissan engine is beautifully detailed from carbon fiber-look heads to all plumbing and wiring, plus four monster chrome turbos. Chrome exhausts wind from the engine to outlets on the body’s side, just in front of the rear wheels, and more horizontal shocks link the rear suspension to the actual engine. Radiators? Yes, there are a couple more tucked in the engine bay right behind the cockpit, and the bay is chrome clad too.

The Bridgestone slicks are labeled Potenzas and there are giant rotors behind the racer’s matte chrome racing wheels.

Then there’s the car’s gloss black body that looks so sharp without oodles of sponsor logos on it, just the big Nissan name across the windshield’s top edge and Nismo branding on the cockpit’s sides just behind the doors. 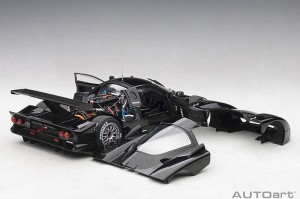 Other small points to look for? There are three air holes atop both doors to help cool the cockpit, black mirrors with mirrored faces, sharp-looking head and taillights, chrome latches for the hood and engine cover, red tow hooks front and rear, photo-etched metal screens over the front fender vents, and, naturally, that beast of a black rear wing.

Inside, the cockpit has a realistic looking racing dash, with good-looking gauge detail, plus a black racing seat with blue shoulder and lap belts and red clasps. The console also is as button-crazy as the real racer, there’s carbon fiber flooring and what looks like a yellow tray that could hold a laptop needed for testing and downloading info on the racer. 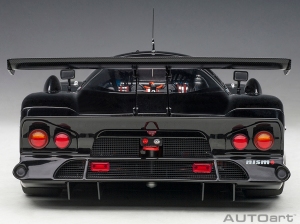