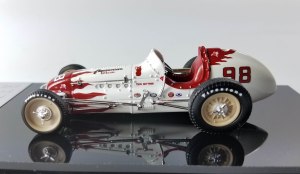 If you’re an Indy 500 nut like me you’ll recognize Troy Ruttman’s name, otherwise he might be a mystery, or vague memory to you.

More likely you recognize the name J.C. Agajanian, Ruttman’s car owner who was noted for wearing a cowboy hat and was a fixture at the Indianapolis Motor Speedway for years, also owning Parnelli Jones’ 1963 Indy-winning roadster.

The 1952 race was the Bill Vukovich show as the rookie ran away and hid in his roadster as others, like Ruttman, tried to keep up. Ruttman started seventh, qualifying at 135 mph and remained in contention all day, actually leading 44 laps, but the last 8 were the ones that counted.

Vukovich, leading by almost a lap broke a steering gear and crashed with just 8 laps remaining. Ruttman cruised on to victory with Jim Rathman, the 1960 Indy winner, finishing second, more than 4 minutes behind. Sam Hanks, the 1957 winner, was third. But it wasn’t long after his win that trouble found Ruttman as he severely injured an arm in a racing accident later that summer and miss almost two years of racing.

Ruttman, who was the youngest Indy winner ever at 22 years and 80 days, said in later interviews that he was never the same after his accident. In fact, he only broke into Indy’s Top 10 finishers again once, in 1954 when he was fourth. 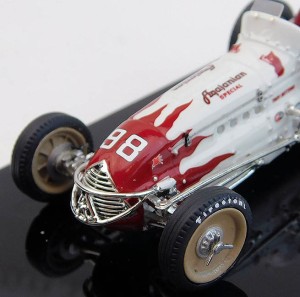 The 1952 winning car was a Kuzma dirt car chassis with the standard Offenhauser (Offy) engine. It was a rare dirt car win, although just a year earlier Lee Wallard had won Indy in another stubby dirt car. Ruttman won at a record speed of 128.922 mph. For those who remember the Ruttman name, Joe Ruttman, his younger brother, raced for many years in NASCAR, and Troy too made some stock car starts.

Ruttman’s racer carried one of the best paint jobs of the day, a white car body with red nose and flames licking back over the hood and down its sides. The cockpit was a similar red with flames painted from its headrest back slightly onto its tail, where a like-colored No. 98 (Agajanian’s traditional car number) rode the tail.

The white car also features the Agajanian Special logo on the hood, which features small latches on the left side that would hold the hood in place on the actual racer. Flying Pegasus, the Mobil Oil Co. logo is located on either side of the nose and the tail, just behind the cockpit and a few other sponsor logos ride below the cockpit’s left side. Ruttman’s name is there too and the Bear Automotive cub is on the cowl, just below the white windscreen.

Small details are what make a big impression on all Replicarz 1/43 models and this one includes the small clear windshield above the windscreen. It was especially needed by Ruttman, a tall driver.

Chrome steering rod and suspension arms front and rear along with brakes on the inner rear wheels add authenticity, while the chrome grille and protection bars in front give the car someone of a jeweled look. The chrome exhaust pipe that runs from the manifold down the car’s right side is a sort of purple color to reflect bluing caused by exhaust heat.

At first glance you might think the light tan colored wheels with silver spinners is a mistake. But Replicarz points out that the wheels on Ruttman’s racer were magnesium, so this color is an exact match to what they would have been on race day. The car as it exists today in the Indianapolis Motor Speedway Museum are now painted black.

Interior detail is nice too with a seatbelt and clasps, big 4-spoke black steering wheel with silver spokes and dash with gauges and a shifter that rode atop the tranny, which ran between the driver’s legs.

I’ve always thought this among the most photogenic Indy winners and now Replicarz has delivered its own winning version.