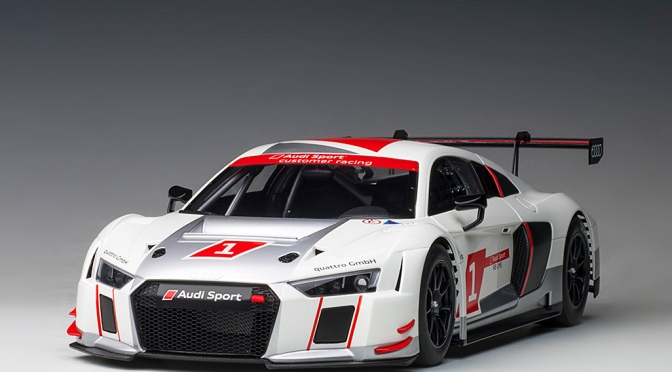 Just like in the real racing world, Autoart now makes composite die-cast bodies for its models, one of the latest being a steaming hot version of Audi’s racy R8.

It has been a few years since I got to test drive the 1/1 version, but it was a rocket, yet comfortable enough to drive on a cross-country trip.

Autoart’s 1/18 scale die-cast model is the FIA GT3 car in its Presentation car trim from 2016. This is what Audi showed off to potential racing teams so they could eyeball the R8 in race trim, just in case they wanted to part with major bucks and hit the track running.

This is the second generation R8 racer set up to compete in the GT3 portion of Le Mans series races. Entry cost was $445,550 for the 2016 model and the cars kept the same specs through the 2018 season.

This bad boy touts Audi’s 5.2-liter V10 cranking 585 horsepower, actually a bit less than the production car. Hey, there are rules in racing! And the car weighed just 2,700 lbs., much lighter than the street version, so the loss of power was no big deal. The R8 also featured a six-speed gearbox.

Note too that while most Audi racers are 4-wheel-drive, using Audi’s quattro system, the GT3 rules don’t allow 4WD, so this racer only powers the rear wheels.

The car is a gloss white with red, black and silver trim, a large No. 1 on the doors inside a red rectangle with Audi Sport and R8 LMS nomenclature protruding from the red block. Other tim includes a broad silver racing stripe covering the hood and tail with a red block amid the stripe on the roof.

Body and trim execution is good, starting with a wide black mesh grille up front with black lower nose spoiler and two red winglets on each front fender. There are six projector beam lights under the thin front lenses and cooling vents cut into the top of both front fenders. Hard to ignore the giant air scoop hole in the hood where you can see inside to a massive metal screen.

Those front fenders flare out beyond the cockpit, again allowing heat to escape just in front of the racer’s doors. Those are indented slightly to provide an air scoop into a black mesh screen just beyond the door to help cool the rear wheels, brakes and engine.

Speaking of which, the giant V10 is impressive under the rear window with silver headers featuring the Audi logo and a wired orangish-red engine block that’s similar to the car’s red trim.

In back the wide red taillights look realistic, two big exhausts project from just below the rear hatch and black diffuser gives the car a racy, Transformer-like appearance. Oh, and there’s a giant red and black spoiler with Audi Sport emblazoned on it, all sitting atop tall black struts.

There’s also a fuel hose coupler on the passenger’s side beyond the door and the car’s racing slicks are branded with the Michelin logo. Wheels are black spoked race wheels with giant silver Brembo brake rotors behind them and labeled Brembo calipers.

The driver’s door window has a slit window that is opened for air circulation to keep the driver from roasting and once you pop that door open you see black safety netting and silver safety cage crossmembers. To see the rest of the interior it’s best to open the passenger-side door where you can see a fire extinguisher and liquid reservoir where a passenger’s seat would be in a road car.

Autoart nicely replicates the black dash and a thin console that angles to the dash for all the buttons and readouts needed by the driver while racing. There’s also a big circular air vent mid-dash to cool the driver. The steering wheel is a flat-bottomed racing wheel that looks much like an fighter pilot’s stick. And the black racing seat is sculpted with high head and neck support and deep side bolsters.