LeMans prototype racers press the envelope of styling and power to compete at the highest levels of the World Endurance Championship that includes the famous 24 Hours of LeMans in France.

Audi has dominated that race for the past decade and Porsche has had its run too. But a few years back Toyota decided to enter the fray and take on the big boys with its TS030. But it took two years to work out the bugs and the hybrid model TS040 won the WEC manufacturer’s championship in 2014.

Autoart has created another masterful reproduction in 1/18 scale, here with the No. 7 Toyota racer that was driven in 2014 by noted endurance drivers, Alexander Wurz, Kazuki Nakajima,  and Stéphane Sarrazin.

Toyota’s foray into prototype racing for the endurance title started in 2012 with the TS030 hybrid. But it was the TS040 that finally moved the Japanese car maker to the top of the LMP1 podium. 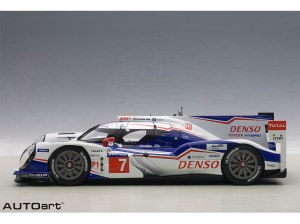 The TS040 used a naturally-aspirated V8 that featured a supercapacitor system, or energy-retrieval system, on the rear and front axle to give it 58% more power than its predecessor. This also gave the racer 4-wheel-drive, a major benefit in an endurance car that often has to race in lousy weather.

The car features a carbon fiber and aluminum honeycomb chassis and its 3.7-liter 90-degree V8 along with the energy-retrieval system generates nearly 1000 horsepower – 986 hp to be exact.

First race for the TS040 was the 2014 6 Hours of Silverstone and the No. 7 car sat on the pole and finished second. However, its team car, No. 8, won, giving Toyota its first 1-2 finish in WEC racing. For the season the No. 7 won once, while the No. 8 Toyota won four races as the team rolled to a points win for the season. The cars also won four poles that season.

But their luck was not as good at LeMans, the year’s most prestigious race. While the No. 7 started on pole and led much of the first half of the race, it fell out about 14 hours in after a wiring loom failure. After an accident, the No. 8 car finished third. 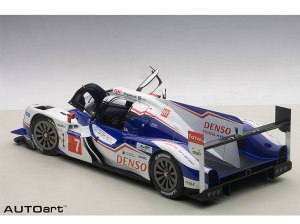 This composite body model looks great, as you’d expect, the white and blue paint scheme is perfectly executed, as is the silver on the roof around the big air scoop that blends into the shark fin on the tail.

Up front is a flat matte black nose wing with photo-etched screens, giant clear bulbous headlamp covers with detailed individual lights underneath, and rectangular holes in each front fender to aid in cooling tires and brakes.  Speaking of which there are giant detailed rotors behind the Michelin slicks and race wheels, held on by red and silver snap-on hubs.

Red mirrors sit on each front fender and there’s a giant windscreen wiper straight-up dead center on the window. Both tiny side doors to allow driver and mechanics access also flip open so you get a nice view of the cockpit. The doors are held shut via magnets, so click shut solidly. 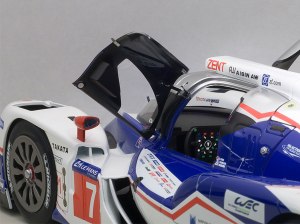 Inside, the highlight is a nicely detailed steering wheel loaded with buttons, plus green Takata lap and shoulder belts (We won’t mention their airbags!), and well-formed racing seat.  Not sure how the driver gets his legs under the steering wheel though.

In back are giant exhaust pipes built into the body that exit out to more matte black trim that extends all the way under the big back wing, which resembles carbon fiber. In back are two sets of three small round lights and a monster black diffuser under the tail.

Body panels have black latches that appear to hold the panels on and of course there are all the proper sponsor logos, such as Denso, Total, TMG, Toyota Hybrid, Takata, and Michelin on the side bodywork, wing and fin.  All logos and numbers are beautifully printed.

The only thing you can’t see is the powerplant, but at this price point the main concern is the car’s overall look and exterior detail. Autoart nails that, as usual.