NEO delivers a humdinger of a Woodie … wagon that is! 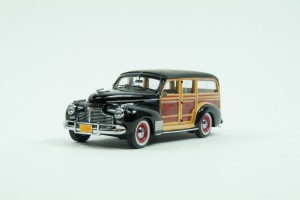 World War II was coming fast and the 1941 model year cars would be the last sold to civilians before the U.S. car factories were switched over to assembling airplanes, tanks and other war machines.

So the 1941 Chevrolet Special Deluxe Station Wagon was special in more than just name, it was a reliable people hauler and a spiffy one at that. Chevrolet made roughly a million cars for 1941 and the Special Deluxe was the cream of its wagon crop and made in limited quantities.

Now it’s among NEO’s newest batch of top-flight resin models featuring vintage U.S. autos, several of which we’ve reviewed here. The latest is a black and wood 1941Chevy wagon, the prototypical Woodie of mid-century cars. This one featured white ash and mahogany body work, something that’s a bit hard to fathom for us living in a plastic and composites world today.

The 1941 Chevys were the first Chevys without running boards and also featured headlights built directly into their fenders, increasing their stylishness.

The Deluxe was Chevy’s main trim line from this year until 1952 when the 210 model debuted. The 1941 model had a new grille and updated suspension and rode on a 116-inch wheelbase that was 3 inches longer than the 1940 model, aiding the car’s ride. Power came from Chevy’s “Blue Flame” inline 6 engine that delivered 85 horsepower.

I’ve always liked wagons with wood bodies, no matter the make. Just the idea of a car body made of wood into the 1940s is fascinating. This one is well executed to represent the lighter ash that served as the body’s framework and darker mahogany for its side panels. NEO does a fine job of mimicking the look and giving the mock paneling a lustrous, well lacquered look.

Other chrome parts include the gas cap on the passenger’s side rear fender, door handles and rear tailgate release, plus the hub caps. There’s also a chrome antenna on the driver’s side and mirror, although a few photos of the real car indicate the rearview mirror should probably be mounted a bit higher on the driver’s window frame.

Exterior door hinges also are visible, and were needed to accommodate the rear doors on the wooden body.  “Master Deluxe” labeling appears on each side of the hood, below a chrome accent strip and just in front of the doors.

The wagon’s nose and rear fenders are gloss black while the roof is flat black and the model has wide white-sidewall tires, which are treaded, but not branded.  The car sports New Mexico license plates front and rear.

Inside, the interior and dash are tan with cream-colored steering wheel, column-shifter and steering column and a simple dash. Plus there are chrome window cranks and door releases.

This is an extremely handsome model that just shows how sharp a good 1/43 scale model can be.