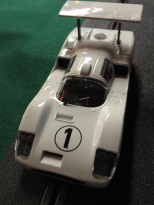 This car blog has presented me with opportunities I might not have had. I have gotten to drive cars that many of you dream about like a Ford GT40, Chaparral 2F, TransAm Javelin, and an Indy car. Ok, time to fess up. The cars I mentioned are actually 1/32nd scale slot cars.

Like a lot of you guys, I started out with HO stuff, then lost interest, flipped the track and cars on eBay. So I’m good, right? Until I started to work for a publisher who published a magazine targeted to the hobby shop owner. My co-workers did reviews on 1/32 slot cars and had tracks to race them. Being a car guy, they invited me to a race night to watch and even let me race a car. Boooom, that was it, I was in again. I was buying cars like….well I don’t know….deliveries were almost daily at home and work. Like a slot car drug house. I’ve slowed down quite a bit now. Below are some of my cars. There’s a lot more where that comes from.

Designing the cars of your dreams

One neat thing I like about the hobby is that you can create cars like my yellow AMX3, a sports car project American Motors was looking at as a possible mid-engine third gen AMX in the early ’70’s. The project was canceled after 20 cars were produced due to escalating costs and pending bumper regulations. Bummer.

Another fav is my ’68 Trans Am Javelin. Not a slot car you can purchase I made it myself combining a Revell Javelin model kit along with a chassis purchased on eBay. The ’71 TA Javelin is supposed to be coming out next month and I’ll get one of those. It just never stops.

The orange car is another one of my creations. At first glance it looks like a mid-60’s Rambler American but is actually an IKA Torino. IKA (Industrias Kaiser Argentina) produced a variety of Kaiser Jeep vehicles and American Motors (AMC) models, including, the Torino, Argentina’s most iconic car from 1978-1982. The Torino, designed by AMC designer Richard A. Teague and Pininfarina. Not only was it a success for the consumers but also the racers. It’s biggest race was the 84 hour Nürburgring race of 1969, finishing in fourth place. Like it’s bigger brother, I bought mine from and eBayer in Argentina. I chucked the chassis but kept the body which is super light. I then mated that with another chassis and the car screams. I go up against Audi’s, Porsches, and Ferraris in the rally class and many times beat them. My fellow racers jump all over the other drivers when I’m up telling them not to get beat by a Rambler.

But just hopping up the cars wasn’t enough for me

My next hole I started putting money into was a track. Why not, then I could test my cars in between races and that’s how I justified it. I now would become another stop on the circuit with mu other buddies. My layout had to be my favorite race track in the world, Road America, about an hour north of where I live here in Wisconsin. I wanted to build an exact replica of it but after getting advice from the track designers on the forums, I found out I did not have the money or space. Seems that 4 miles (length of Road America) comes out to about 6,000 feet of track. Well so much for that. What I ended up doing was using all the turns in a scaled down layout. Still big though. Sits on a 20 x 20 custom table. On the left below is a diagram and on the right my track. The reason the main straight in not strait is because I used my iPhone to get a panorama shot. BTW, that AMC flag comes from Road America when the company was in Trans Am racing.

Has the money sucking hole sealed up?

No, but its gotten a whole lot smaller. I still peruse eBay just to see what’s out there but not really looking for new cars. The projects in the shop now are building one of the Lotus 56 STP turbines that raced at Indy during the late 60’s that were banned because…..well they were too cool and the sanctioning body was still stuck in the 1950’s. I bought a resin cast body and they a donor can to make the chassis for it. Not sure who’s number is going to go on it, Graham Hill’s, Joe Leonard’s, or Art Pollard’s. I’ve also got into making a new cars from parts. Heck I have a pile of them. Please help me.